Lumads turn to UN for resolution on killings 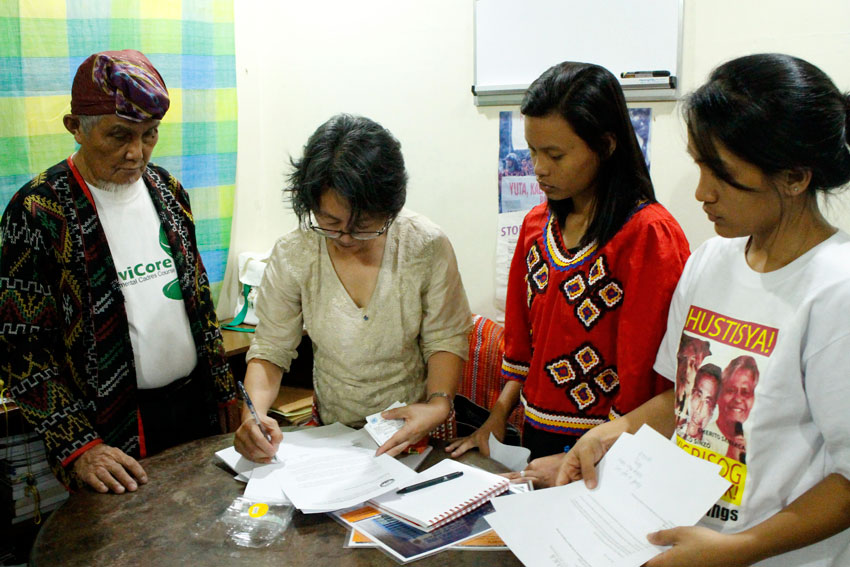 KIN and witnesses of Lumad killings in Mindanao submit cases of human rights violations in indigenous communities allegedly perpetrated by the Army and paramilitary groups to UN Special Rapporteur on the Rights of Indigenous Peoples, Vicky Tauli-Corpuz (second from left). (Contributed photo)

DAVAO CITY — Relatives of the victims of the killings in Lianga, Surigao del Sur, turned to the United Nations to seek resolution to the unsolved killings of their kindred in the area.

The kin, together with indigenous peoples rights advocates, met with the United Nations Special Rapporteur on the Rights of Indigenous Peoples Vicky Tauli-Corpuz on Wednesday.

Piya Macliing Malayao, secretary general of Katribu said the series of killings of Lumads in Mindanao is now “a crisis that is alarming and need urgent action.”

“We talked to her. The kin and witnesses recounted to her the horrible incidents, told her the demands of their communities and sought her support to address the issues,” said Malayao in a statement on Thursday.

“The killings in Lianga on September 1 of an educator and two Manobo leaders, the massacre in Pangantucan that ended the lives of five Manobos, the attacks against indigenous schools and alternative learning centers, and the massive evacuations of IP communities in Mindanao because of military operations should be more than enough for the government to act and stop further incidents and attacks against IPs,” said Malayao.

Corpuz, in an earlier interview said the killings of IPs are “not acceptable” and must end at once.

“It cannot be a tribal conflict since they are all Manobos,” Corpuz was quoted as saying.

Malayao said “Corpuz has committed to bring the issues in the UN and in other international venues to help pressure the Philippine government to end the repression on IPs and end impunity.”

Malayao also added that the UNSRIP wanted to visit the communities of the Manobos and conduct investigation on the incidents.

“We hope that the she could really help us in pressuring the government to act on the serious situation of the Lumads and in getting justice for the victims,” said Malayao. (davaotoday.com)