BUTUAN CITY – Friends and relatives of school administrator, Emerito Samarca, arrived in throngs last Saturday to pay their last respects to the man who they fondly called as “Tatay Emok”.

Samarca, director of the Alternative Learning Center for Agriculture and Livelihood Development (Alcadev), was among those killed by suspected members of the militia group Magahat Bagani Force in Lianga town, Surigao del Sur last September 1. 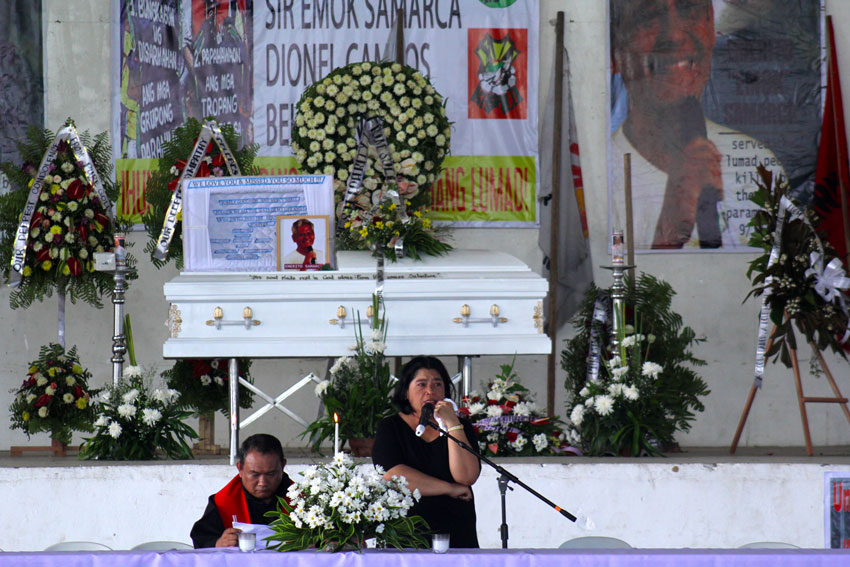 Yosie Samarca, wife of the slain Executive Director of Alcadev Emerito “Emok” Samarca, is overwhelmed by the crowd who attended the mass at the capitol gym of Butuan City. 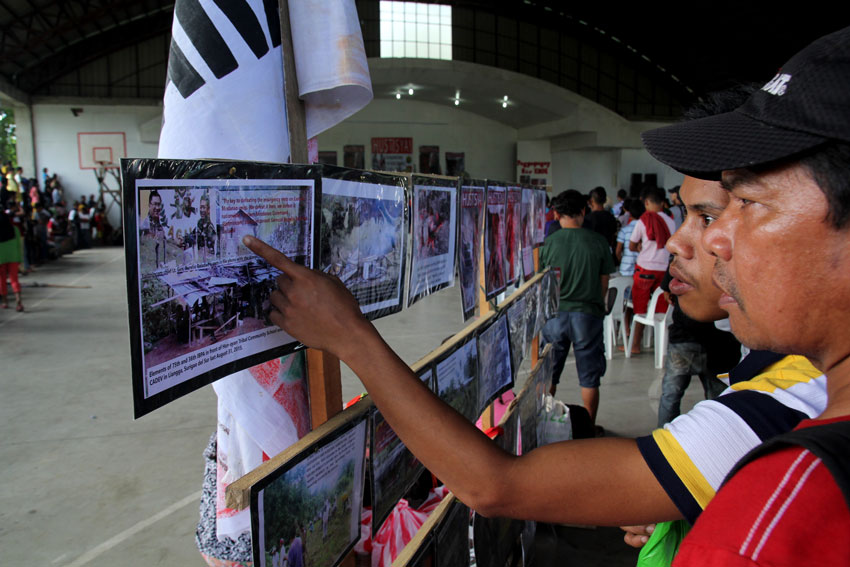 People who visited the wake of Alcadev director Emerito Samarca look at the photos of the “Lianga Massacre” displayed in the Capitol Gym in Butuan City. 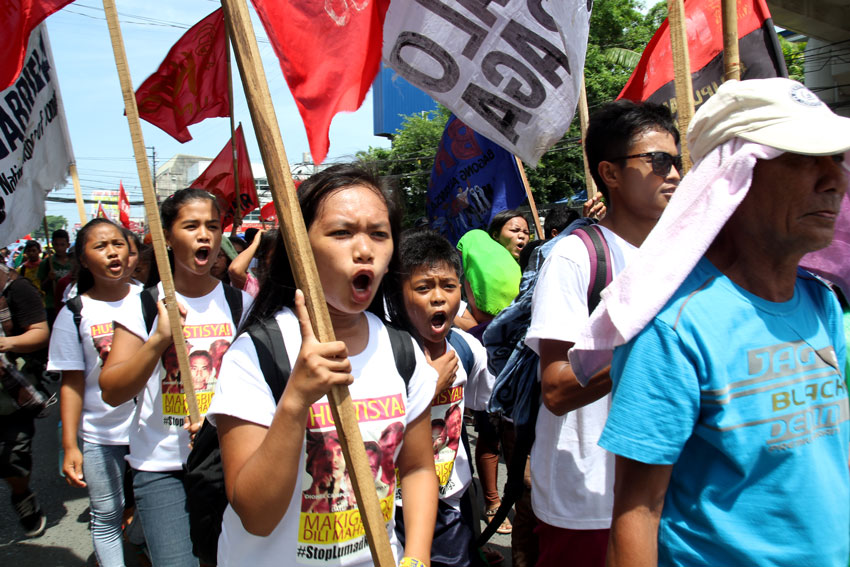 RAGE. High-school students of Alcadev join the funeral march for their school director, from the Capitol Gym to Guingona Park in Butuan City. 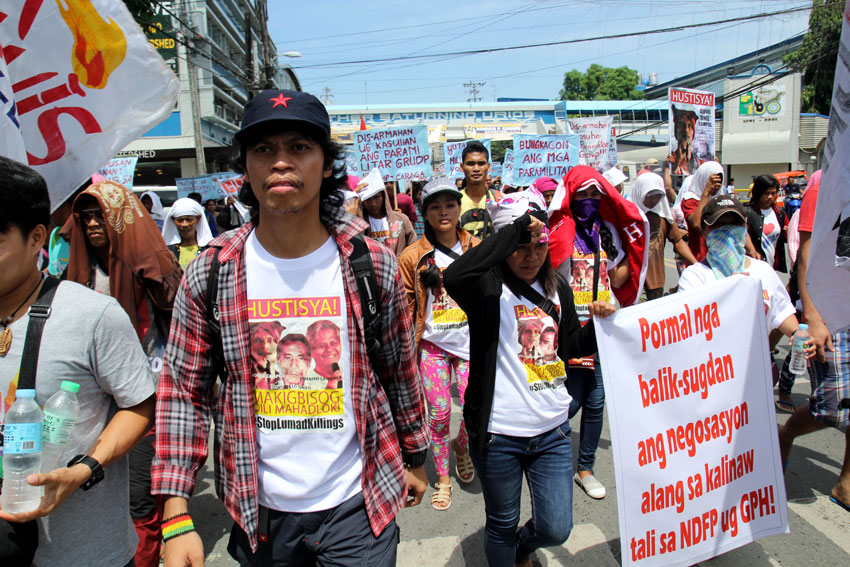 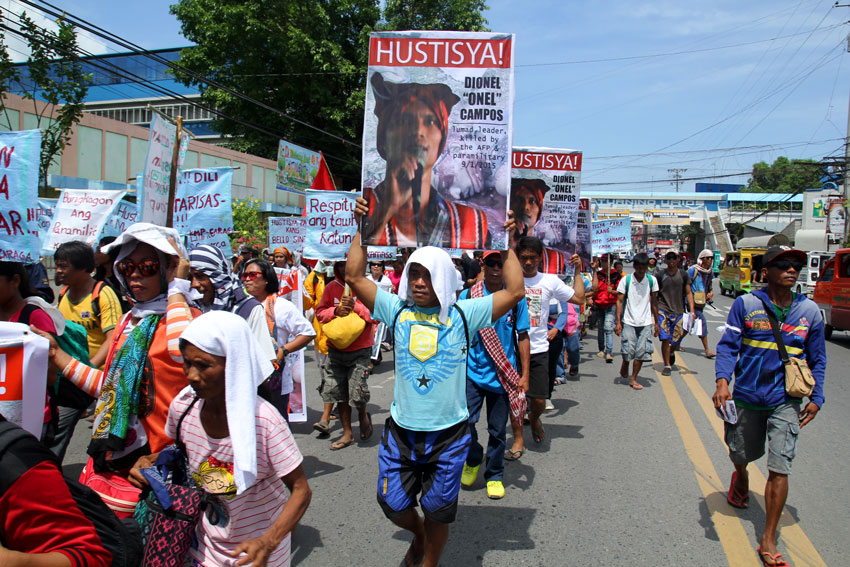 More than 10,000 people from different regions in Mindanao join the funeral march for Emerito Samarca, Dionel Campos, and Datu Jovello Sinzo who were killed by the Magahat-Bagani Force last September 1. The militia group is allegedly created by the Army. 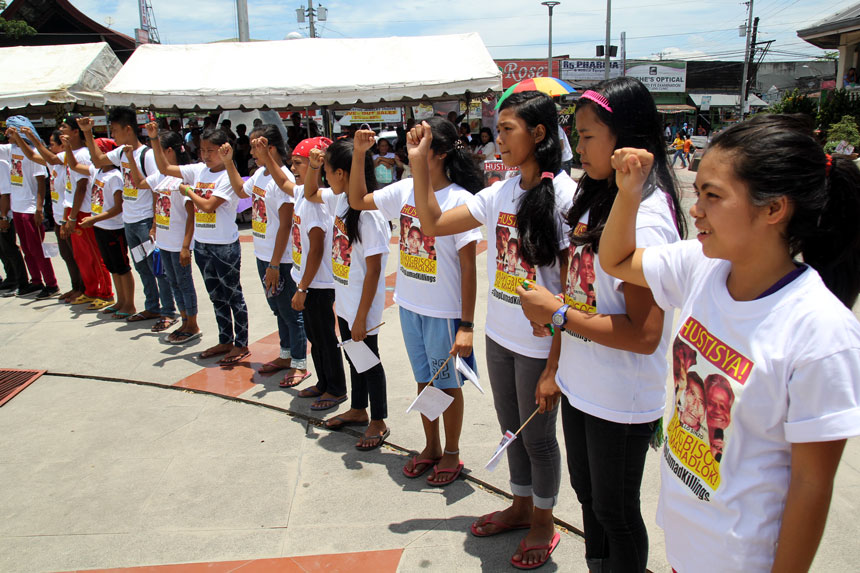 Alcadev students raise their fists to salute their school director, “Sir Emok” and vowed to continue what he has started for the education of the Lumads in Surigao del Sur. 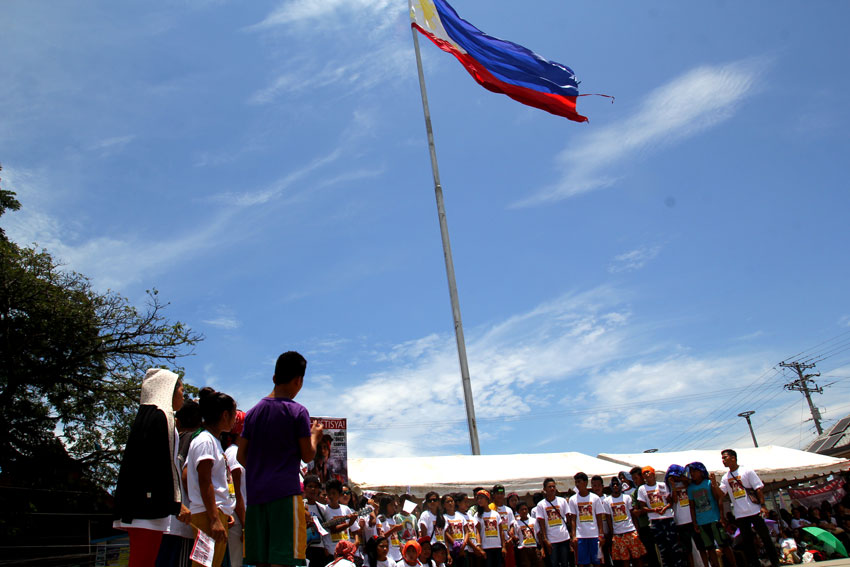 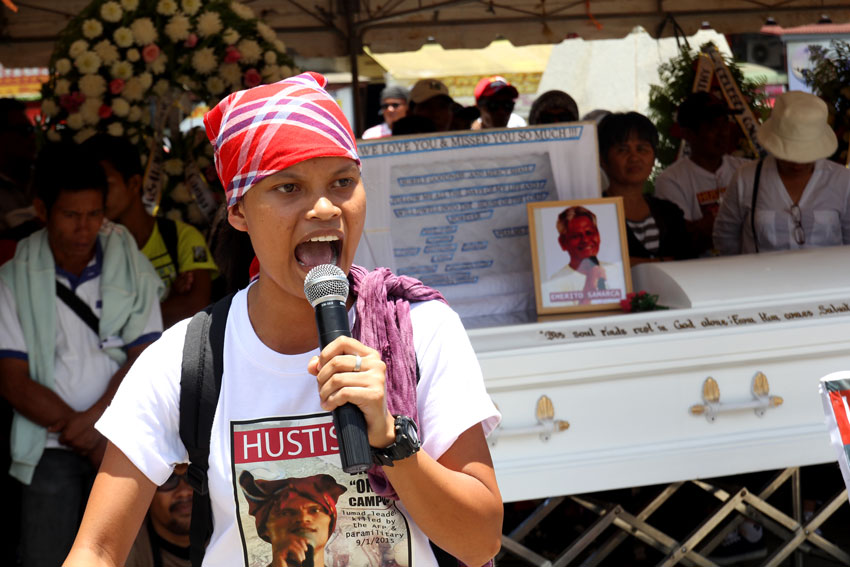 Michelle Campos, daughter of the slain Lumad leader Dionel Campos who chairs the Malahutayong Pakigbisog Alang sa Sumusunod says the government’s anti-insurgency operation, Oplan Bayanihan is the reason why her father was killed by the Magahat-Bagani Forces. The older Campos is accused of being a supporter of the New People’s Army. 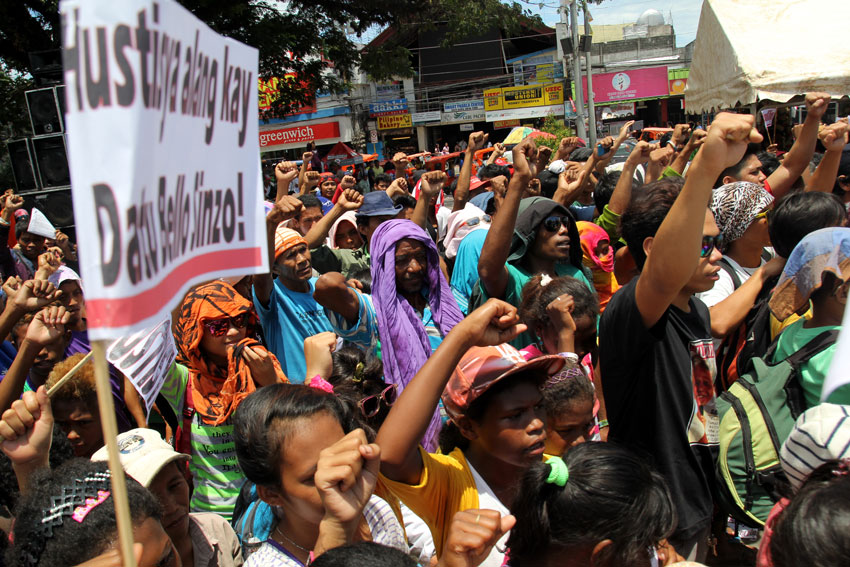 People raise their fists for Emerito Samarca as the sign to continue the struggle what was left by there Sir Emok. 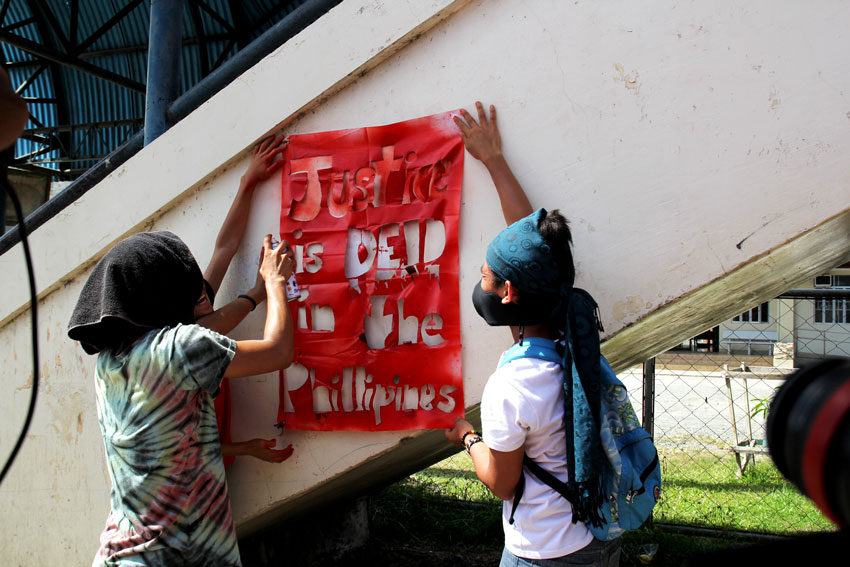 Protesters paint the words “Justice is dead in the Philippines” during the funeral caravan of Emerito Samarca. 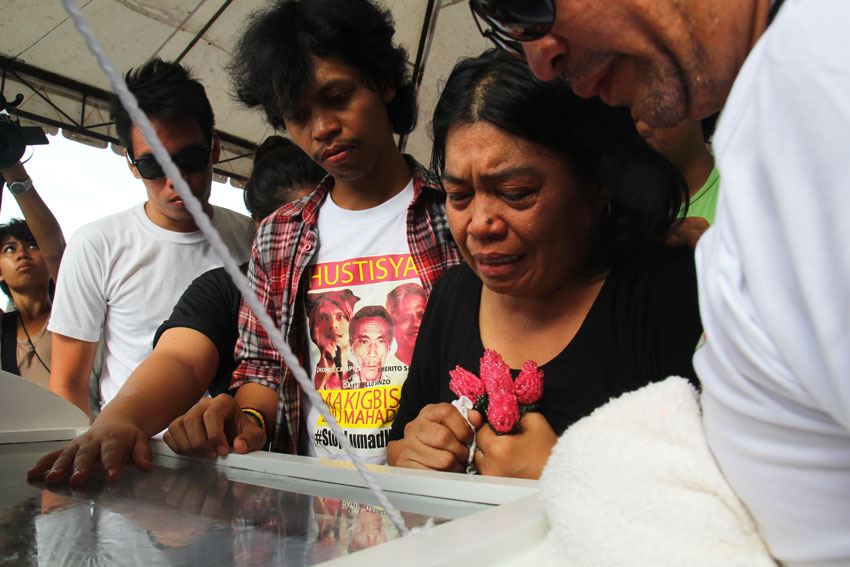 SAMARCA FAMILY. The family of Emerito Samarca take their last glimpse of their father at the Butuan Garden Memorial Park in Bancasi, Butuan City. 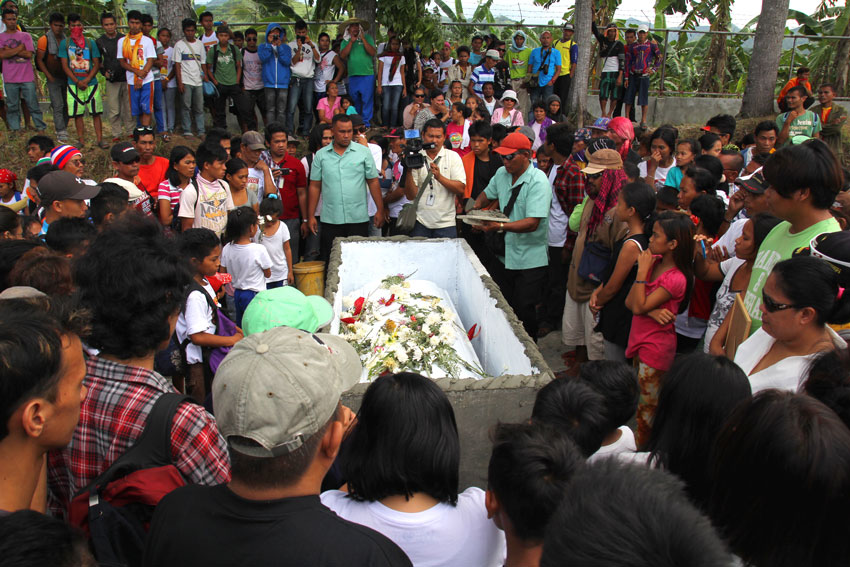 Emerito Samarca’s casket is surrounded by thousands of people who paid their last respects during his funeral on Saturday.