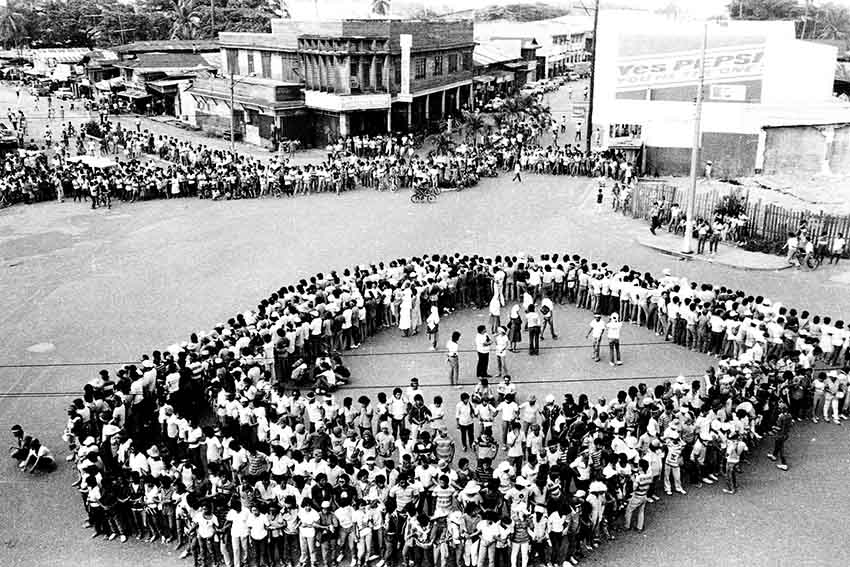 On the 32nd anniversary of the 1986 Revolution that expelled the dictator Ferdinand Marcos, Konsyensya Dabaw honors Davao’s contributions to the social upheaval that was a major milestone in the ongoing struggle of Filipinos.

Davao was host to political struggles such as the groundbreaking Welgang Bayan, which demonstrated the multisectoral and nationwide character of the opposition to authoritarian rule. Pres. Rodrigo Duterte himself acknowledged that his mother, Nanay Soling Duterte, was among the leaders of the “Yellow Friday Movement” in the city. The first pastoral letter against Marcos’s Martial Law, “Reign of Terror in the Countryside,” was issued by then Davao Archbishop Antonio Mabutas over abuses committed against church workers at that time, particularly the torture and killings in Catalunan Grande. We have a long list of martyrs and heroes—who originated from Davao as well as those from other places but came to regard it as home—whose rights were violated through illegal arrests and detentions, torture, and killings and who endured innumerable hardships in their resistance against authoritarianism.

All these happened despite Davao being under the control of local leaders who were known as long-time allies of Marcos. All these affirmed Davao’s connectedness to—rather than superiority over—the rest of the peoples and communities of Mindanao laboring for societal transformation.

Thus, Davao and its peoples have long-standing traditions of asserting rights and freedoms, as well as creating and holding multiple spaces where these can be expressed and claimed by different groups.

Davaoeños can attest to the importance and benefits of standing up to tyrants. The expulsion of the Marcoses made adjustments to local political arrangements possible that enabled the rise of alternative leaders like then appointee vice-mayor, Rody Duterte.

But the 1986 uprising is an unfinished one in that the liberal democratic governance that came afterward did not adequately address fundamental problems and ease peoples’ frustrations with economic and political elites. This dissatisfaction continued to manifest in the different movements and struggles that made their aspirations known in the various arena of Davao from the mid-80s.

New challenges confront Davaoeños today and they are not simply about terrorism as we are being conditioned to think. The challenges are to our appreciation and assertion of our rights and freedoms and our relationships to government and fellow citizens.

Having gotten used to unchanged political arrangements and relative progress in three decades, there is a danger that Davao would mistake sterile security and superficial stability for durable peace and order.

Basking in its new status as the de facto Philippine political center and its claims to being a model and top performer, Davao might miss out on extending solidarity to besieged peoples and communities and succumb to the arrogance it accuses Metro Manila of—thinking that its way is the superior, if not the only, way; that the rest of the country revolves around it; and that each and every criticism constitutes a malicious attack. Seeing so many familiar names and faces from Davao and Mindanao now in leading positions, we might misconstrue that legitimate support for change means an uncritical stance and absolute acquiescence to the government. To face and overcome these challenges, we invoke Davao’s tradition of making spaces for democratic critique and contestation. We trust that Davaoeños would hold fast to the active exercise of engaged and critical citizenship. These would propel us forward towards our next collective milestones for justice, equality, and democracy.

For these reasons, we bid welcome and express solidarity to the Mindanaoans for Civil Liberties (M4CL) which is set to hold the 7th Mindanao Human Rights Summit in the city on February 23-24. May the discussions, learning, agreements, and resolutions reached in the Summit translate into vibrant actions for rights and freedoms that Davaoeños will keep on supporting.