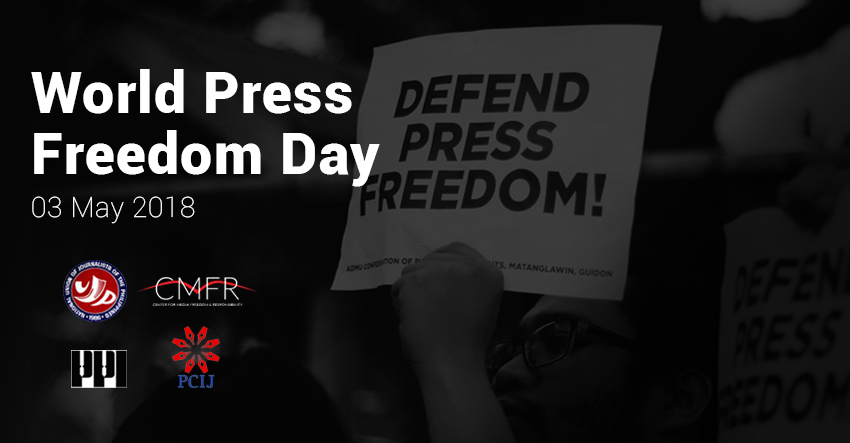 Pooled Editorial issued on World Press Freedom Day, May 3, 2018, by the National Union of Journalists of the Philippines (NUJP), Center for Media Freedom and Responsibility (CMFR), Philippine Press Institute, and Philippine Center for Investigative Journalism (PCIJ)

RODRIGO R. Duterte’s presidency has altered and controlled the public discourse so radically in its favor in ways rude and bold. One tragic result: it has restricted and narrowed the celebrated freedom of the Philippine press and the people’s cherished right to know.

In his first 22 months in power, Mr. Duterte has earned the dubious honor of logging 85 various cases of attacks and threats on these dual values that the Constitution upholds as inalienable rights of the citizens. The number far exceeds those recorded under four presidents before him.

Separately and together, these 85 cases have made the practice of journalism an even more dangerous endeavor under Duterte.

From June 30, 2016 to May 1, 2018, these cases include the killing of 9 journalists, 16 libel cases, 14 cases of online harassment, 11 death threats, 6 slay attempts, 6 cases of harassment, 5 cases of intimidation, 4 cases of website attack, revoked registration or denied franchise renewal, verbal abuse, strafing, and police surveillance of journalists and media agencies.

These cases project the force of presidential power dominating the political sphere, with zealous support from Duterte allies and appointees, and their sponsored misinformation army online and off. They have hurled at members of the press insults and unfair labels, and allegations of corruption and misconduct without firm basis in fact or in law.

These cases linger amid effete efforts at solution by state agencies, and in the context of the hostile and vicious discourse against the administration’s critics and the critical media.

The President, Cabinet members, and the House of Representatives have imposed and proposed unprecedented restrictions on journalist access to official news events. Congress and executive agencies have denied or delayed the corporate registration or franchises required for operation of media companies.

Some journalists and media groups have also reported police surveillance of their movement and their places of work.

Attacks on press freedom diminish not just the news media. These weaken the capacity of the news media to sustain the people’s unfettered exchange of ideas about public issues. Presidential intolerance of criticism is now a well established aspect of Duterte’s leadership. While he is not the only chief executive who has become sensitive to press criticism, Duterte has made sure that everyone understands that misfortunes could hound and befall his critics.

And yet Duterte had promised change; his government should thus tell the people when and where change has come to fruition, and whether it has triggered better or worse results. By keeping citizens and voters fully informed about what and how those they have raised to power are doing right or wrong, a free press sustains and strengthens democracy.

That is not quite the situation under Duterte as yet. Intimidated, restrained, and threatened with consequences, the news media have been significantly constrained to report well and fully on the war on drugs, the siege of Marawi, cases of alleged corruption in high office, questions about the wealth of the Duterte family, the public debate on Charter change and federalism, the shutdown of Boracay, and not the least significant, the incursions of China in the West Philippine Sea.

Rodrigo R. Duterte has brandished the power of fear. His threats and attacks bear the full weight of his office, the highest in the land. No need to test constitutional limits. All he seems to want to do is to make enough journalists understand that they should be very afraid.

But, like fear, courage could be contagious. And unlike fear that disempowers, courage built on the power of truth and the unity of all in media is a force that empowers.

To stand firm and to stand united for press freedom and democracy, to speak truth to power and to keep power in check — this much the press owes the people. And whoever is president, the paramount duty of a free press in a democracy is to defend and uphold the people’s right to know, with unqualified courage and unity.