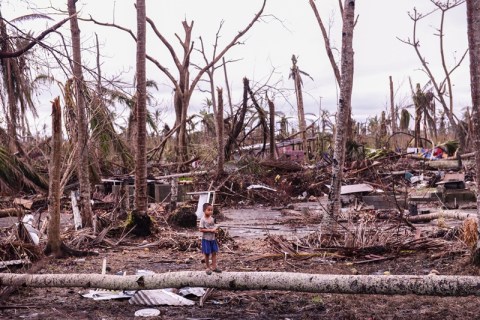 The sun was blazing over Barangay Capirawan. Its radiance used to be a blessing for the residents of this farming community in Palo, Leyte. But today, the community had no use for farming. The earth was parched; the leaves and branches of lifeless trees arid; and the rice straws flattened across the fields the locales call jagna dried up.

Under this scorching heat, the mothers in the community told us their stories of Typhoon Yolanda, a disaster so catastrophic they never thought they would survive.

“The day before Yolanda, the weather was like this,” said Ederlina, aged 41. “It arrived instantly. So fast and so hard.”

At the crack of dawn on November 8, Ederlina and 427 other families in her village woke up to the whooshing sound of the wind and the heavy rainfall piercing their roofs. By that time, the eye of the super typhoon had already hit its first target in Guiuan, Eastern Samar. And as it went barreling across Leyte, walls, jalousie, and tin roofs in the barangay were blowing off, leaving a few concrete structures wobbling but slightly intact.

Against a cemented wall, Ederlina’s family shielded themselves while keeping an eye on flying rocks and other heavy materials.

“It was very painful to keep our eyes open because sand was blowing on our face. The typhoon did not just bring wind and rain. There was sand,” she said.

A few meters away, Priscilla, 71 years old, and 29 other people hid inside the toilet of her family’s house. It was the only structure left standing in the block. She told her son to call on anyone he saw out there to come aboard to what seemed like her little Noah’s Ark. Among them was Lilia. She was clutching on her wall clock because she heard in the news that the typhoon would subside at 10:00 am. But it was only 7:00 am.

“How did we fit in there,” Priscilla asked Lilia.

“I don’t know. I guess we were meant to survive.”

It was the first time these women huddled together and talked of what happened to them on that day. I sat with them for a psychosocial therapy session initiated by Balsa Mindanao, a network of religious groups and volunteers responding to survivors of disasters since Typhoon Sendong in 2011.

The session wasn’t anything close to the talking circles we see in the movies. The respondents weren’t on comfortable seats and spacious room but they sat on logs while holding ripped umbrellas out in the sun.

I thought the setting wasn’t conducive. But once they started talking, I realized these women didn’t need comfort, they wanted to talk.

No television, no information

Of all the mothers in the circle, only Rowena did not know about the coming storm.   In her family’s small shack now reduced to rubble, she had no television, no radio, and no cellphone. While the world was tracking down the strongest typhoon in history, Rowena and her family remained clueless had it not been for her sister-in-law Lilia who came to their house to warn them.

Rowena had no inkling of the bad weather as the sky was clear the day before the typhoon came. This is what climate experts call the calm before the storm. But how on earth could she know about that?

In times of disasters, people turn to television and the Internet for information. But ironically in the Philippines, access to life-saving information remains elusive especially for people living below poverty line and in distant areas with no electricity and cell service. Rowena is not alone.

Understanding of information is also a perennial challenge in this country. With diverse dialects and lack of education, the rhetoric of the media and public speeches is sometimes too verbose for an ordinary Filipino to fathom.

Such was the case of Lilia. 56 years old, who lost two daughters and four grandchildren to the storm. Had her children fully understood the disastrous proportions it could bring, they would have known that the sea across them could rise and wash away not only their house but also their lives.

“I asked them to stay with me and my husband here in Capirawan because we are far from the sea. At least here, when the storm gets worse, we can just run to the jagna safely,” she said.

Then, she cupped her face, looked down, and cried. “It was Mylene’s birthday. And she was due this month.”

Over the next couple of days, I heard the same stories from survivors over and over again. In Barangay San Joaquin, a low-lying community along the coast of Palo facing Leyte Gulf, houses became graveyards of people who stayed behind not comprehending that water could literally bury them alive.

They hadn’t known about it, for sure. Or maybe they did when they heard of the alien term “storm surge”.

Marlon, a teacher in a nearby high school, admitted he too didn’t understand what a storm surge was. “If people had known that it is almost like a tsunami then maybe they left. It was the first time we heard of storm surge and no one seemed to know what it was,” he complained.

During its early warnings, PAGASA did use the term storm surge. President Noynoy Aquino also mentioned it in his speech that came too late on the evening of November 7.

Unquestionably, they knew what they were talking about. But what about the likes of Marlon?

What about Anita who had to bury her two children along with over a hundred nameless corpses in a mass grave?

What about the 22 members of a family in Barangay San Joaquin who drowned to death when the rampaging sea and violent wind toppled their house and trapped them underwater?

What about those who floated to nowhere while shouting for help until their souls surrendered?

They too deserved to understand.

Ardee Delola is a segment producer and writer for the National TV network GMA.