ALL EYES ON MAYOR

A boy listens to Mayor Rodrigo Duterte as he gives his message during the city’s Christmas treat to poor children last Monday at Almendras Gym. (davaotoday.com photo by Ace R. Morandante)

THE MAYOR AND THE BOY

Mayor Rody Duterte kids around with a boy from Boys Town Davao, a shelter for abandoned or neglected boys, during their Christmas Party and opening of the Boystown Pizzeria. Duterte played Santa Claus by giving gift certificates and financial assistance to the institution. (davaotoday.com photo by Tyrone A. Velez)

Mayor Rodrigo Duterte visits survivors of the Barangay 12-B fire near V. Mapa Street to deliver 10,000 pesos in cash and relief packs to the survivors. (davaotoday.com photo by Ace R. Morandate)

Davao City Mayor Rodrigo Duterte issued an ultimatum to two “persons of interests” to surrender to authorities until Saturday 3 pm. Authorities are looking for one person who was seen in CCTV footages in both SM and Gaisanom Mall Cinema hours before the blasts, and another person purchasing batteries that was the type used for the bombs. “We would like to talk to you,” the mayor said. (davaotoday.com photo by Medel V. Hernani)

Davao City Police Chief Superintendent Ronaldo dela Rosa confirmed (the threats) and added that he had briefed SM Ecoland’s security team few days ago to tighten their watch because of information from intelligence of “terror” threats, but said this one “got away.”
“Mainit sila sa American brand (They hate American brand),” dela Rosa said.

“GO AHEAD OR GO HOME”

Mayor Rody Duterte said he would announce on August 13 if the Kadayawan Festival, the city’s main annual attraction, would push through or be cancelled following security considerations after the bombings in Mindanao. “If the margin of safety is 7.5, we’ll go ahead; but short of that let’s say at 5, we’ll go home and sleep early,” he explained. (davaotoday.com photo by Medel V. Hernani) 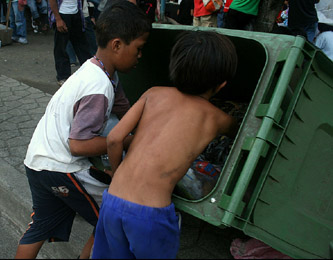 He said government’s view of ‘gangsterism’ as a peace and order concern shows government failure “to look at why poverty pushes them towards it.”