“You may rest in Peace, while we seek Justice”

Such was the hope of families and friends of the 58 massacred victims when they visited the crime scene three months after the carnage. It was one of the most excruciating moments for everyone, even among the curious who went along with over 300 individuals who trooped to see for themselves and feel the dread.

But alas, perhaps, Justice was just so elusive. In that span of three months after the killings, so many of us still noticed tell-tale signs of the gruesome act: some slippers strewn about seemed to speak in silence about how its owners might have tried to evade in futility the volley of bullets sprayed liberally on them; a piece of local weekly tabloid with its pages still intact, lay silently still, a mute witness in Saksi Mindanaoan News with dateline November 16-22, still fresh from the printers as it must have been carried about by one of the tabloids two young staffers Gina de la Cruz and Marife Montaño who were mercilessly killed. 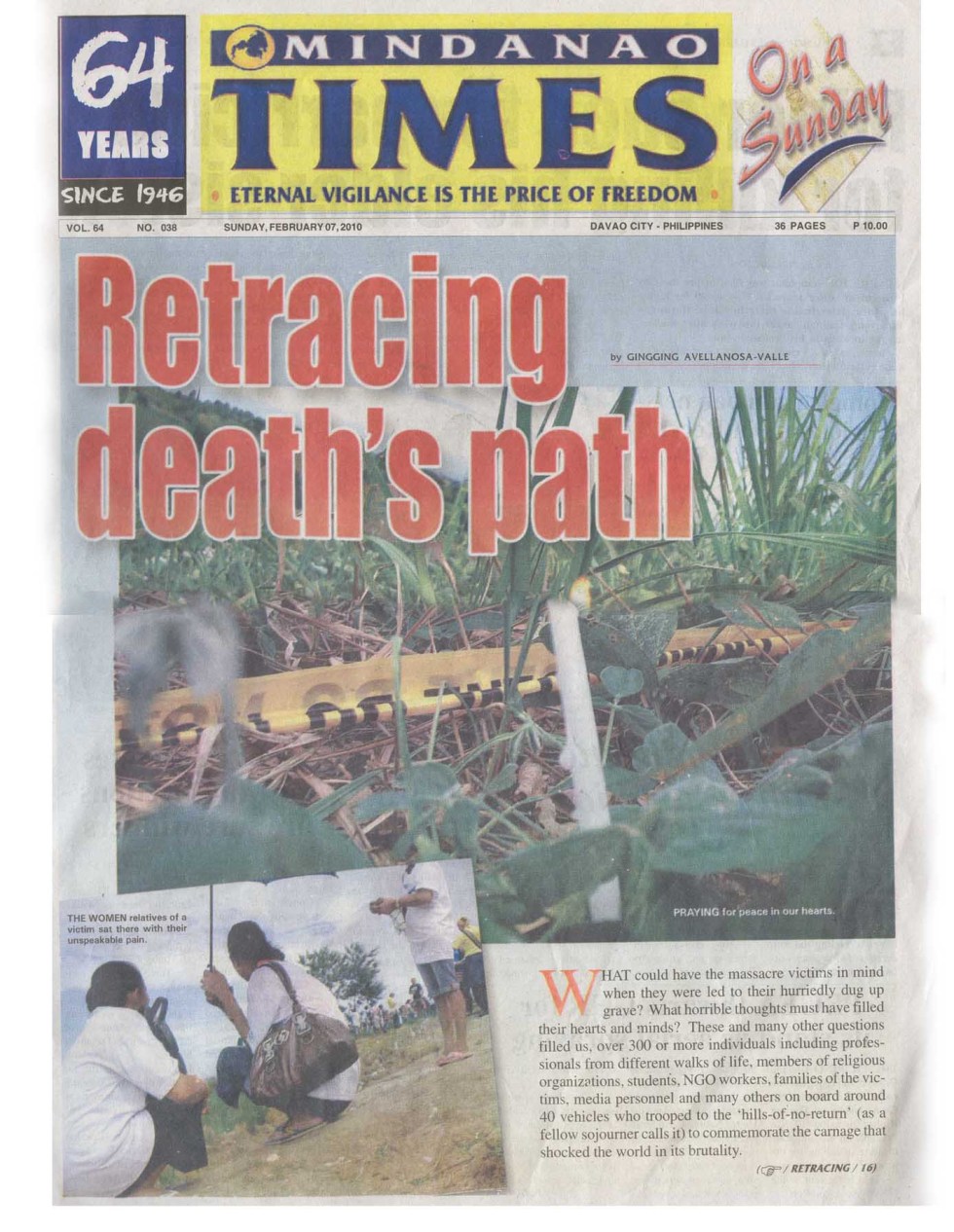 The young women must have had their first real beat, and must have been excited to do their job, only to be mercilessly smothered. In the hastily dug up huge clearing where the murderers intended to bury their dastardly act including smashed up vehicles together with the dead, several bits and pieces were left behind, as if in the days that followed the unearthing and recovery of the victims’ bodies, no living soul dared go and looked into the place. 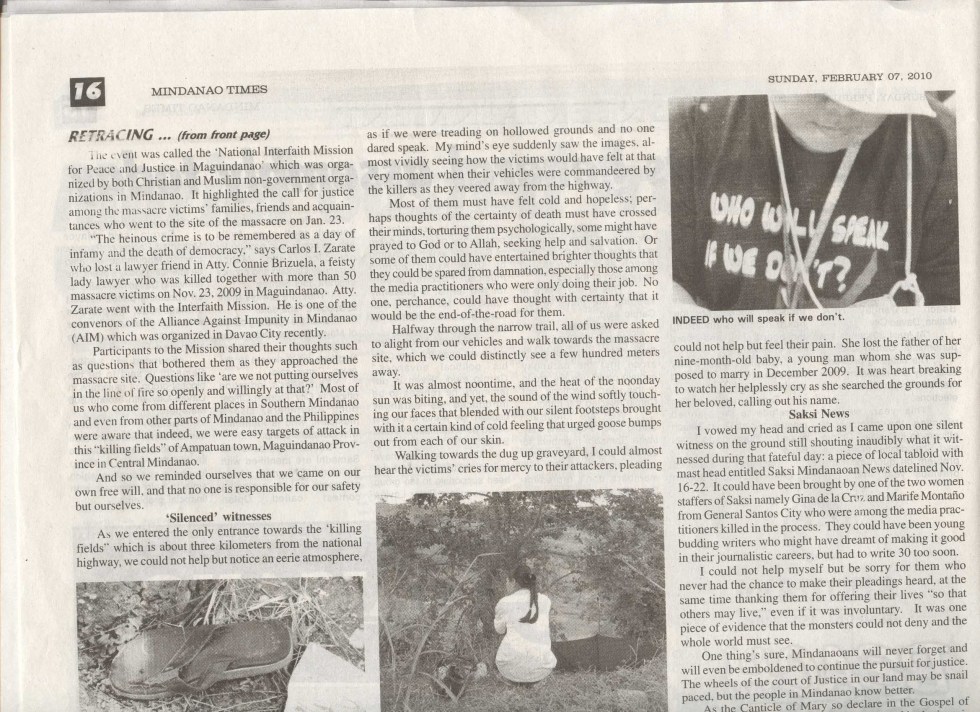 That day, several people were milling around but it was ghostly silent, as everyone gingerly trod on the bloodied ground, even when the blood and stench of death must have been washed away by the rain and dried by the merciless sun. Yet, seemingly, there’s something left suspended in the air, a muted crying. Not even the wind dared stir the grasses and the leaves as they seemed drooping in sadness. 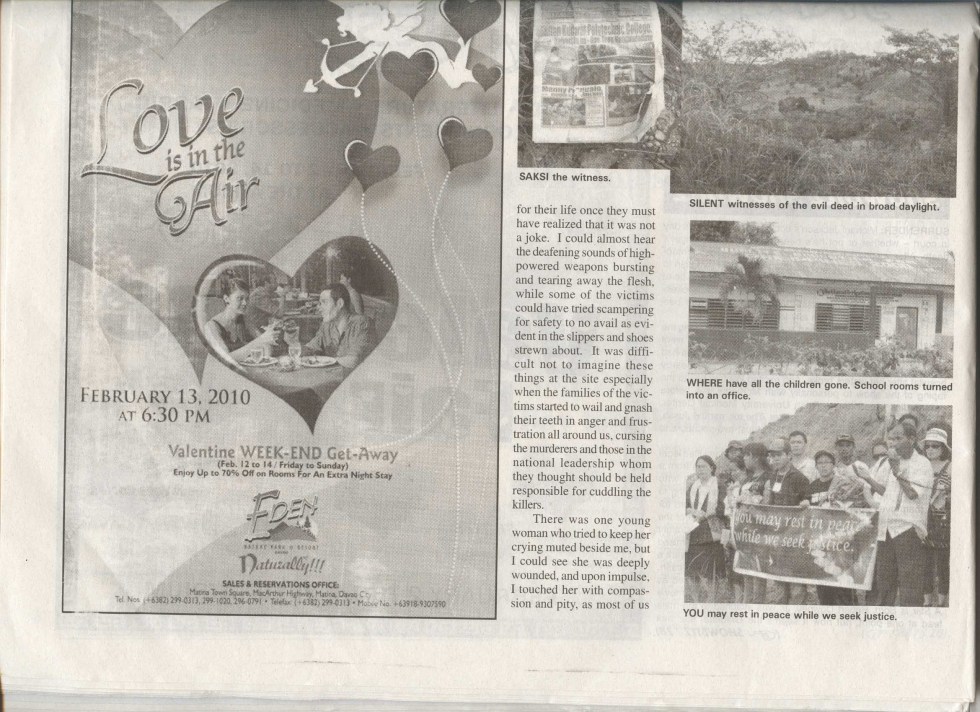 I wonder how it had been as days and months rolled into years, and still… No justice… nothing…it seemed justice and peace had also died.

But as a media practitioner asks loudly in silence: “Who will speak if we don’t?” A decade has come and gone, yet the wheels of justice seems agonizingly slow to come. Will it ever come? Would the 58 innocent lives snuffed unjustly finally rest in eternal peace when their loved ones could not find the reason to move on?

There is no other way but continue the fight for justice, for nothing can bring genuine peace if evil continues to exist, and justice is not served once and for all.