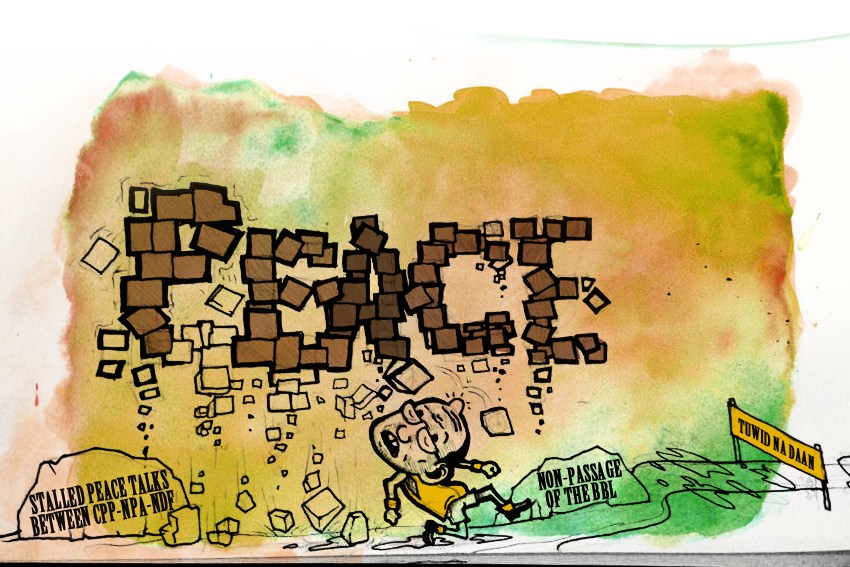 Last month in Davao Del Norte, around 295 Manobos were again forced to leave their homes and returned to the sanctuary of UCCP Haran. This after Alibando Tingkas, a 15 y.o. Talaingod Manobo Grade 3 student, was brutally killed by the Alamara paramilitary group whose savagery is being bolstered by the arms and backing by the AFP. This renewed evacuation of the Manobos brought the IDPs in Davao City to 800 individuals, majority of whom have been in sanctuary for almost a year now.

In Surigao, the nearly 4,000 Lumads have been languishing at makeshift evacuation centers for six months now as the AFP-created paramilitary group Magahat Bagani are allowed to roam free fearless of any accountability of their crimes of murder and terror against civilians.

At the crux of this prevailing state of impunity and worsening humanitarian crisis, among other structural causes, is the mulish attitude of the Aquino government on sincerely negotiating peace with Moro separatist groups and the CPP-NPA-NDF.

The non-passage of the Bangsamoro Basic Law by the Aquino’s administration – an act which, although dismissed and taken for granted by Pres. Aquino is clearly taken by the Moro people as a betrayal of their trust and quest for autonomy.

The failure of the Aquino government to pursue the peace talks with the NDFP- CPP-NPA has instead fomented the cycle of violence where lawless elements such as paramilitaries and vigilantes are coddled and let loose to prey on hapless civilians and non-government organizations and civil society groups that act as arbiters and bringers of positive change in marginalized and neglected communities.

While the Aquino government continues to capitalize on the so-called democracy which the Filipino people won after toppling the Marcos dictatorship in 1986, the same administration has been denying the people of the most reasonable and much demanded platform where issues on peace, justice, human rights, socio-economic agenda directly affecting the people may be discussed and perhaps, be given solutions to – the Peace Talks.

As we come closer to the end of the Aquino’s term in which the peace negotiations have been derailed, delayed, denied, we begin to hope that the next president will have a different perspective on resolving the peace situation in the country.

Although we know better than to expect that the country’s next president and next round of leaders will be able to solve our deeply rooted problems on peace and social justice. We know that rather than to hope and expect, it is all in the people’s hands to struggle and achieve genuine peace.