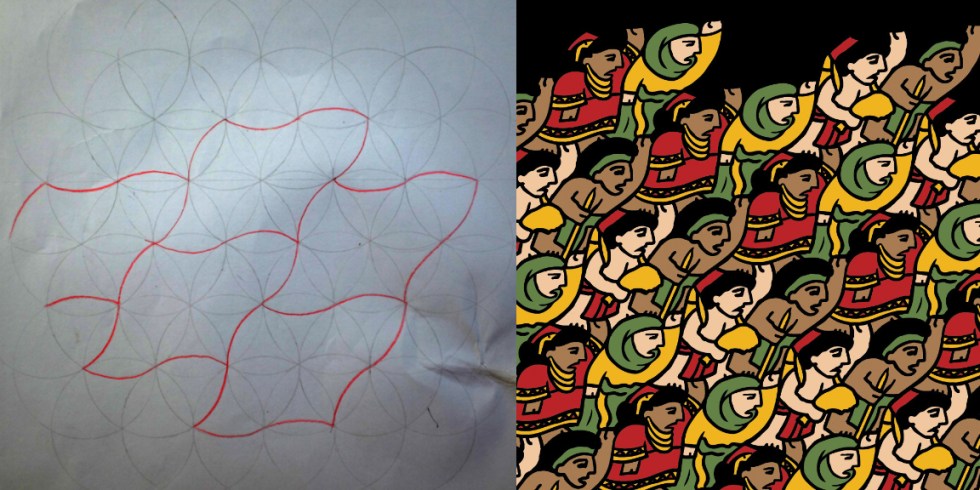 Progressive art works better once it serves functions outside galleries and museums. Same with protest poetry, once words step out of books and flow into the streets. For instance, some artworks in Dissident Vicinities had past lives and after lives. Archie Oclos installed “Panginoong Walang Lupa” (Lord Without Land) at Hacienda Luisita before the exhibit as noted by Teo Marasigan (read his review and Margaret Yarcia’s for details about the artworks); subsequently, Renan Ortiz reassembled “Death’s Head” at the Kampuhan (camp) of the national minorities and animated loop “Bihag” (Captive) by Leonilo Doloricon and Tom Estrera circulates in social media.

Thus, artists and writers involved with movements advocating alternatives to the neoliberal “order” have the capacity to process, with their hearts and minds, the unimaginable realities happening in Philippine society. They usually work closely with progressive sectors, sometimes discreetly writing and illustrating without bylines for pamphlets or statements, without signatures for graphic art or cartoons; they value comments, flattering or scathing, as long as such contributes to developing aesthetics that advance the politics of the respective sector they serve and identify with.

Far from romanticizing artists and writers as the conscience of our dark times, they too are somewhat materials produced by society. As Arnold Alamon concisely puts it, “as the writer strings together words to produce concepts, he is also being written by his social encounters and circumstance.” Consequently, some artist and writers with no praxis and only sosyalan practice, i.e. rubbing elbows with fellow creative gifts of god to humanity, tend to be written by ignorance and arrogance. Whoever says that “[i]t has been three decades since Filipino poets have reassembled in pages of protest” (BLOODLUST: Protest Poetry from Marcos to Duterte, 2017) seems to be blinded by inattentiveness or sense of exclusivity. Either way, a circle with rippling wavelets limited to its mirror images of fellow poets reflect a limited scope of vision, hence the outrageous claim that accordingly results to poverty of insight.

Contrary to the previous example of how static concentric circles confine thoughts and emotions, individuals and collectives within dynamic interwoven circles enrich and empower the self and the group. Intertwined with wide array of ideas, struggles and ways of lives, each circle links arms with another, forming a human chain meant to shackle the common enemy, or at least limit its destructive functions so each respective sphere of life thrives toward a full potential that has been hampered for so long by oppressive forces.

As seen in the initial pencils of Karl Castro, the circles form the flower of life, rendering in sacred geometry the pattern that gives the official poster of Lakbayan 2017 its identity, which, needless to say is beyond identity politics played by some individuals who proclaim their indigenous lineage and take advantage of the roots that they exoticize for self-promotional interests. Contrary to such personalities that care only about the immediate now and their respective safe spaces, the national minorities concern themselves with the entire temporal and spatial planes: they anchor the basis of respective claims to ancestral domains in a past, which subdued most lowlanders to colonial interventions that indigenous peoples resisted, and they struggle against imperialism in the present so that the utopian future gradually takes shape: a collectively dreamt future where each body and soul may have sufficient space for growth to transcend the current alienated state of being atomized meatbags that wander mindlessly, and toward being a total human.

As steps toward such a goal, let our circles intersect with those of the national minorities today, to conclude Pambansang Lakbayan 2017 (national caravan), to remember the atrocities of Marcos’s Martial Law and to condemn the killings of our times and Duterte’s Martial Law in Mindanao. More than we can know, a mere act of getting together may change us, and also change comrades and colleagues we march along with, for the better. During such acts of solidarity, we do not just make a point. We contribute coordinates to a plane, forming patterns, shapes or lines that somehow directs the future and its limits. Our interwoven circles shall remain intact, so we can reverse triangles. (davaotoday.com)