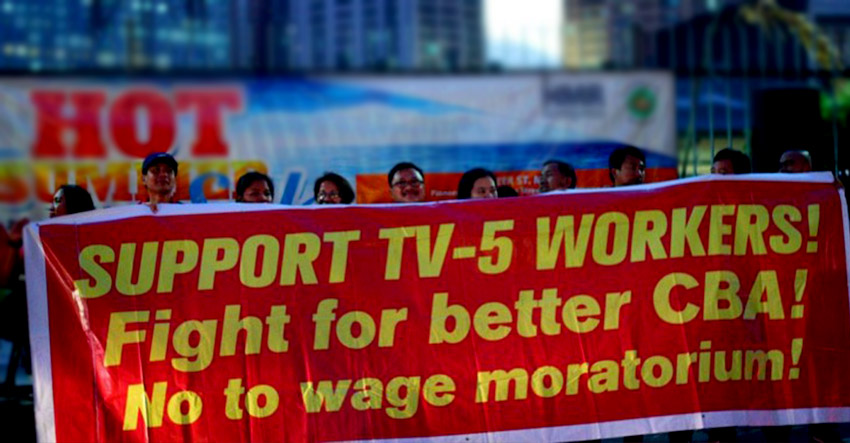 It is not fortuitous that the International Workers’ Day also dubbed as Labour Day commemorated every 1st of May is antecedent to World Press Freedom Day every 3rd of May. The former seeks to unite the working class as they put forward their collective demands and struggles against the capitalist market while the latter upholds the fundamental freedom of the press including the rights of the journalists and media workers that are historically subject of various State attacks.

The media workers, notably those immersed in the community media including alternative, grassroots-based and advocacy journalism, are part of the communal force of the working class. While they have their own sectoral demands, the media workers alongside press freedom advocates form part of the workers’ front against low remuneration, killings, impunity, contractualization, and union-busting.

In the article Communication is Freedom: Karl Marx on Press Freedom and Censorship, Hanno Hardt contended that press freedom as an economic consideration “is a professional prerequisite for intellectual labour”.

The need to revisit labor at least in the context of press freedom will allow us to grasp the currents of and future prospects for journalism and mass movements in general. Michael Hardt and Antonio Negri in their book Labor of Dionysus argued that “labor points to a primary and radical alternative: an alternative that allows the analysis of labor to be posed not only as a destructive force against capitalist society but also as the proposition or affirmation of another society”.

As such, labor fuels the condition of production within and outside the newsroom because it predetermines the very condition of the journalists and media workers. The value of labor in form of remuneration and benefits provided to the media workers sets the material and subjective positions of the workers vis-à-vis the dominant political environment that they are exposed to.

In the Philippine community media, the appalling condition of journalists and media workers are no different from that of the general lines of workers that suffer beyond the cut of salaries, and worst, are ever threatened to forming critical and mass-based unions. The Philippine Center for Investigative Journalism (PCIJ) for one revealed that some community journalists get as little as ₱3,000.00 a month while the senior ones get ₱10,000.00 to ₱15,000.00. A number of these journalists also work for various media outlets to extend their source of monetary income.

Inequitable in its obvious form, these monthly income rates especially that of the “rank and file” community media workers are disturbing even if we consider the daily minimum wage rate in the National Capital Region (NCR) at ₱444.00 to 481.00 and other regions’ at ₱217.00 to 362.50 (as per National Wages and Productivity Commission in March 2016). Not to mention that a number of these workers serve as sole providers to their families in the provinces. Also, the more alarming situation is that they are the ones more vulnerable to various State-sponsored assaults.

Of the 170 journalists and media workers killed in the country since 1986, over 90 percent have worked for the community radio and print media. Testament to the prevailing culture of impunity under the current Aquino regime is the persistent attacks against media workers. 31 have been killed and many others suppressed and threatened as they cover critical public issues like the massacre of farmers in Kidapawan City, Cotabato in April 2016. Lest we forget that justice in its literal and general terms remains elusive for the families of 32 media workers in the Ampatuan-Maguindanao massacre in November 2009. The State-nurtured culture of impunity continuously encourages attacks on the media as its perpetrators, especially the masterminds of the killings, remain scot-free.

Contractualization is another horrendous indicator of a failed press freedom. If such exists in the corporate dominant media system as in the case of “talents” of ABS-CBN and GMA 7 (thus the formation of Internal Job Market Workers Union or IJMWU of ABS-CBN and Talents Association of GMA or TAG), it is expectedly inexorable in the community media outfits. We can hardly think of a union-formation in the context of community media because its survival and demise are largely dependent on the financial viability of the media outlet to sustain its operations including the salaries, benefits and training of its media workers.

As a result of a contractualized labor, the formation of unions and organized movements is widely quelled in the Philippine media. In case such movements are recognized by the media owners, the existing labor laws and regulations permit the deliberate manipulation of workers’ rights in favour of the capitalists-owners that are enchanted with the fruits of commercial advertising over editorial independence. Consequentially, the public endures the very same deprivation the media workers themselves face in light of a commercialized media system where public information gets commoditized and commodity becomes the sole information peddled to the public.

Worst of all, scant attention is given to the community media because we failed to capitalize on its inherent power to reshape a society by immersing its audience from the shackles of political apathy. The supposed investigative and participatory approach of community media must be grasped in the context of localized community audience so as to warrant a grassroots-based movement. Our lure to the media products fed by the Manila-centric corporate dominant media must, from time to time, be interrogated if we are becoming abrupt sympathizers of a colonizing culture, that is, Western capitalism.

The community media does not operate in a vacuum. So is the condition of its workers who, in spite of being perpetual target of attacks, are grappling with the instrumentalities of a capitalist media system. The media workers form part of the alliance that provokes the dominant rule of Western capitalism, thereby engaging the public in the production of a critical mass.

As Hanno Hardt put it, “society must insist on the unimpeded workings of a press system that advances an emancipatory cause and reinforces progress as a politically crucial provider of a general forum for the public exchange of ideas”.