Welcoming back the Lumad 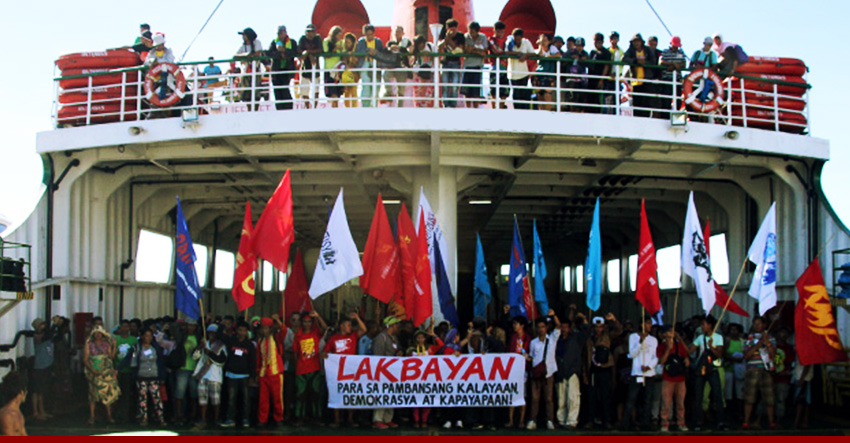 Some may still have perplexities as to the struggles of the Lumad. Some may even seem incognizant as to why various indigenous groups need to converge and hold protest actions at the capital.

To make sense of this, let us recall some figures from last year’s campaign as I believe this still matters at the present.

Then, the Kalipunan ng Katutubong Mamayang Pilipino (KAMP) recorded that 57 out of the 71 indigenous peoples killed under the administration of President Benigno Aquino III were Lumad. Meanwhile, the campaign organizers of Manilakbayan 2015 – a nationwide people’s campaign against the killings and harassments of and militarization of native lands of the Lumad in Mindanao – estimated that 87 indigenous Lumad schools suffered from military attacks, 233 cases of human rights violations against Lumad children were recorded, while over 40,000 Lumad were forcibly displaced due to militarization (see my previous column Specter of capitalism, culture of resistance, and the Lumad, April 4, 2016).

And to have a grasp of the above, allow me to take you back to last year’s Manilakbayan 2015: Kampuhan sa UP Diliman when the University of the Philippines Diliman grounds served as the sanctuary of Lumad and other indigenous groups from October 26 to November 1.

I must say that the welcoming of the Lumad to the University grounds (dubbed as Salubungan) immediately signified a historic moment when a diverse strands of reception and emotions came into play. The acclamation of the Lumad’s presence was loud and clear. The eagerness to defend them from any kind of attacks from the State was ubiquitous. While the political and historical struggles that they endured for so many years were evident, the longing of the public to embrace their life and way of life mounted. Exactly at that time, there was already recognition of the things to celebrate and to struggle for with the Lumad.

The celebration of the struggles and life of the Lumad went on with insightful dialogues and enriching conversations between them and the public. Both the students and scholars, for one, learned from the actual recollections of the indigenous peoples of Mindanao.

I remember some of my journalism students trying to synthesize their conversations with leaders and members of the Lumad and Moro people. Accordingly, the Lumads decided to traverse the capital to fortify their call for the protection of their native lands. They reiterated their strong opposition to mining companies for the very simple reason that these companies turned their native lands into jungles of mining explorations, and, if I may aptly describe it, a jungle of exploitation and global capitalism. Adding pain to this was the way the elements of the military and paramilitary connived with mining companies by restoring military presence in the native lands thereby forcing the indigenous peoples to leave what they considered the quintessential life.

In another conversation, some Moro people recalled how difficult the employment opportunity for them was due to the way the State associate their names and identities with “terrorists”. Some of them were even forced to change their identifications/names from time to time to avoid possible persecutions and military intimidations.

Aside from storytelling and conversations, the Lumad showcased their cultural presentations in forms of theatrical play, role playing, dancing, singing, and poem recitals. One momentous presentation was that of the Lumad child who at a young age (between 5-7 years) was rightly immersed in the culture that he is living in. During his poem-reading presentation, you can hear the articulation of his voice. You can feel the outrage from his heart. You can sense the direction of his thoughts.

The political exhibits were also a reflection of the longings and prospects of the indigenous peoples. Unlike the grandiose, yet sometimes simplistic artworks displayed in the corporate palaces of capitalist tycoons, the materials within and around the grounds were embedded on the indigenous struggles. Here, we witnessed the Museo Lumad (Lumad Museum) that featured the indigenous clothes, accessories, musical instruments, self-defense weapons, and photographic documentations of their lives. Demands to stop destructive mining, anti-militarization, protection for indigenous schools, alongside the campaign for justice for the killings of three Lumad leaders Emerito Samarca, Dionel Campos and Bello Sinzo were all over the place.

These narratives and presentations of the Lumad all existed to engage the public in the discourse of asserting the rights of our indigenous brothers and sisters. And we will witness more of this in the coming days as around 3,000 Lumad and Moro people are expected to participate in this year’s campaign for self-determination of the indigenous peoples.

From Manilakbayan 2015, this year’s campaign will center on the call for self-determination and just peace, thus, paving the way for the theme Lakbayan ng Pambansang Minorya para sa Sariling Pagpapasya at Makatarungang Kapayapaan (Journey of the National Minorities for Self-Determination and Just Peace). They will be joined by various entities from fellow indigenous groups, human rights, civil society and media organizations, artists, academics, and the youth and students in the National Capital Region from October 8 – 28.