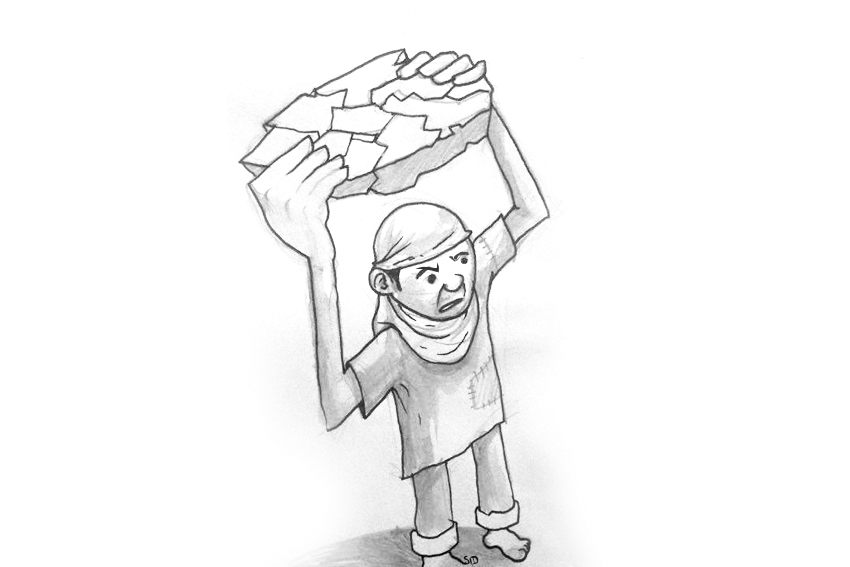 by a radio anchor what the provincial government will be doing in the face of the 5,000-strong barricade in Kidapawan City, North Cotabato governor Emmylou “Lala” Talino-Mendoza’s spokesperson made clear what her administration was more concerned of: keeping the traffic going. The farmers and Lumads from ten towns are demanding for immediate relief in the wake of the severe drought brought about by the El Niño. Yet,  the provincial government merely considers them as traffic nuisance.

Certainly this is déjà vu from a week ago when thousands of farmers and Lumads barricaded in front of the Armed Forces of the Philippines Eastern Mindanao Command headquarters in Davao City. The farmers called for the pullout of government soldiers in the farmers’ communities. Still backtracking to three years ago, 5,000 Supertyphoon Pablo victims barricaded the Davao-Butuan national highway in Montevista town, Compostela Valley to demand immediate assistance.

While the farmers’ demands were unquestionably just, the powers-that-be have in the instant answered them with astonishing indifference. All of these agencies were upset of course, not because they shared the people’s plight, but because the traffic was a nightmare. Some even threatened legal action against the participants of the mass actions. This kind of disdain against a legitimate democratic action is so patently cruel it should be made criminal.

Even indulging their traffic management concerns only manifests their ineptitude: certainly the demonstrators gave them prior notice to give them ample time to set-up rerouting schemes? The local police in Kidapawan were given the heads up; they even prepared their own condescending rally in front of the demonstrators, complete with megaphones and chanting “Your governor loves you.”

To add insult to serious injury, what of these agencies’ answers to the pressing issues being demanded by the farmers and Lumads? No better two words than criminal negligence. For those in the barricades in Kidapawan City, a day’s hard work for a measly 3 kilos of almost-staling rice for those affected by El Nino while the P200M calamity fund, in the words of the Gov. Talino-Santos’ mouthpiece, “is still intact.” The spokesperson even went as far as to say that since there was no formal complaint or request for relief that reached their office, the provincial government cannot consider the demands of the thousand farmers and Lumads in the barricade.

But the ones that ultimately take the cake in this farce of a governance called Daang Matuwid are Pres. Benigno Aquino III and his erstwhile DILG secretary, now presidential-wannabe, Mar Roxas. Both blames the typhoon victims for not heeding the warnings while they themselves, caught off-guard by the enormity of the calamity, fail time and again to prepare decent rescue and relief plans.

Aquino III claims there is no campaign to kill anyone in the country while Lumads and farmers and children and hundreds more fall like ducks in the open season of Oplan Bayanihan. Both were definitely forewarned by the magnitude of the effect of El Niño, but both were too privileged to ever fathom how dire the situation will be for farmers and the indigenous people living in the countryside.

By its very definition, a barricade is meant to obstruct or protect something. In barricading, the peasants and Lumads are concurrently obstructing the continued indifference and criminal neglect of the Aquino administration and protecting their very lives and livelihood from eventual ruin. However the government vilifies this action, it is just and long overdue.

The instruments of the state—the Manila government of Aquino III, DSWD, Eastern Mindanao Command and the provincial government of North Cotabato in these instances—have pushed the farmers and Lumads to the wall. But now the destitute in Mindanao have found a power in their collective action and they are pushing back. To them, time was long past for reticence or timidly begging for aid.