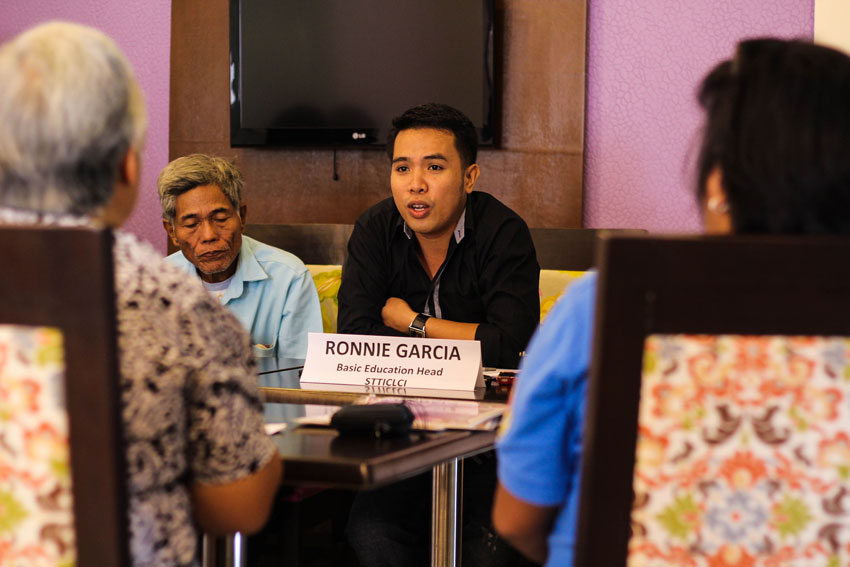 I was shocked and extremely saddened upon hearing of the sudden death of Ronnie Garcia, Executive Director of the Salugpungan Ta Tanu Igkanugon Community Learning Centers, which has schools in dozens of Lumad communities throughout the Davao region.  When I was first told that he had passed, my heart skipped a beat and expected that the next sentence would be that the death threats he had been receiving for some time now had been made a reality. Like many other volunteer teachers and Lumad students, Sir Ronnie had been tailed, illegally surveilled, harassed, his family intimidated – all because he chose to serve poor mountain communities.  But nevertheless, that he died from an illness still gives me little comfort.

I had written before about the persecution Sir Ronnie had had to undergo in the hands of military intelligence and other state agents.  His courage in the face of these is admirable: he accepted the role of Salupungan Schools Executive Director not too long ago even if it meant a larger responsibility and even larger risks, as what happened to former director Ms. Lolit Muya, whose husband was illegally arrested and remains detained to this day. But what I realized with his passing was that, rising above how the reactionary state sought to torment him while he was with us, it is his simple will to serve that must now speak volumes to us in this day and age when that spirit is being eroded from within and without.

This erosion stems from what many like-minded educators call as the neoliberal attack on our basic social services, such as education.  This entails the imposition of the logic of the market into, if not all, almost all aspects of formal study and teaching. The detrimental effects of such impositions become all the more stark when we juxtapose what is happening to mainstream schools with the community schools that Sir Ronnie helped establish and run.

For example, this shift of focus to the logic of the market has resulted in a sort of schizophrenia as to what teachers are supposed to do and what the nature of their relationship with students and the public at large is. This confusion can be seen in the creeping in of jargon that traditionally had only been used in business settings: “products” to refer to graduates, “clientele” to refer to both students (who presumably “pay” for or “consume” our services) and the public (or more specifically, businesses, who depend upon universities to “supply” them with new hires). Many parents go so far as to seek a “return of investment” (another piece of business jargon) on educational expenses incurred by their children.

There is thus currently the immense pressure to tailor-fit our graduates to the “job market”. Under the K to 12 and in technical-vocational institutions, the emphasis is upon skills needed for “readily exportable manpower”. In universities I do not need to look any further than my own course, anthropology, and the other social sciences as examples of degrees perceived to be non-profitable and slowly being marginalized in the market atmosphere of higher education.

What this thinking misses is that what the job market needs may not necessarily be what the nation or the people need. As literature teacher Sarah Churchwell (contrasting the humanities with the more “in-demand” STEM courses) points out, “You won’t solve the problem of religious fundamentalism with a science experiment.”

But, one may argue, of course schools must catch up to current job trends to ensure that more Filipinos would be able to become employed, earn, and survive. Ah, but there is surviving, and there is surviving. There is eking out a living just to be able to avail the bare needs for one’s self and one’s immediate family, and then there is the flourishing of the wider community, the collective attainment of everyone’s needs, and the satisfaction gained not from winning in a competition of individuals, but from all of us progressing together.

Needless to say it is this latter perspective that Sir Ronnie and other teachers like him espoused, and continue to espouse, in their work with Lumad communities. These schools are free; for the students, the only “return of investment” expected is that they help their fellow Lumad. The capitalist adage of competition being the only way by which individuals do their best falls apart when one sees how strong their sense of community and their motivation for cooperation are.

Another offshoot of the school/market confusion of neoliberalism is the emphasis on measuring “productivity” in virtually the same way you would at a factory line. Teachers and school employees are increasingly “monitored” in order to reach “targets” and attain “outputs.” These have translated to absurd targets of 130% or more, and boiling down to numbers achievements that, variably, cannot really be quantified, does not necessarily need quantification, or whose quantification takes the form of a mangled caricature of the essence of those achievements.

Another domain in education where this obsession to measure has taken over is research and publication. In my university, for example, numbers such as the bald quantity of published papers, or “representations” such as the H-index are taken as indicators of one’s research mettle – though we must all know that quantity does not necessarily mean quality, and to be blunt what the H-index essentially represents is talk between and among a small pool of academics, repeated several times.

Of course there is nothing wrong with assessing our works, or publishing and getting cited.  But all these recent evaluation requirements are part of what Mark Fisher called the “marketization” of forms of labor that are resistant to quantification.  For example, do the number of graduates, passing rates, and achievement test scores tell us anything about how ready the youth are for public engagement, to critically think about their society, or how much they would be willing to put their country first before themselves?  No, but it does give academic bureaucrats the “data” they need to measure how “efficiently” schools function like fast-food restaurants speedily serving up burgers.

So it is bothersome how educators and educational institutions pat themselves on the backs when the numbers are right and the rankings are high, and take these unquestioningly as evidence for being outstanding educators. Sir Ronnie would probably have done poorly according to such metrics.

Some would perhaps say, well it’s apples and oranges.  Mainstream schools should be evaluated differently from community schools;  expectations for their respective educators should likewise be distinct from each other. But why should they, when all other rules and regulations in establishing schools and evaluating teachers and students apply equally? Why should they, when all educational institutions of the land presumably share, at the very least, the general aims of producing capable citizens with hearts and minds that love the country and are ready and willing to help their fellows?

And this is where the timeless question of “for whom” and “for what” must be asked. Mainstream schools are preoccupied with employability in the service of the global job market. Mainstream schools become fixated on targets and rankings because that is how global competitiveness has been decreed to be reckoned.  Under neoliberalism, these are the whys and wherefores of our educational system.

But Sir Ronnie’s teaching, and the schools in which he taught, are clearly different from this. They are preoccupied not with what our human export policy wants, but what our localities need. And what is global competitiveness when we fail to help reduce poverty and inequality in our own backyard?

Let me just say one last point about Sir Ronnie’s legacy. As an educator, he was as much in front of the classroom teaching by the blackboard as he was at the front of mobilizations and lakbayans.  He was as much someone who studied the system, talked to his students about it, tried to work within it, as someone who actively sought ways to concretely change it. Many other teachers are content with just the former half of that equation, and indeed the directions of our current educational system overtly encourage just that. Sir Ronnie, in his sustained work with Lumad schools, sought to go beyond this bare minimum. His short life is the exemplar of teaching, and more importantly, transformation. (davaotoday.com)