Rice liberalization and VILLARization of farmlands

Earlier this week a senate hearing was conducted due to the plummeting prices of Palay (unhusked rice). During the aforesaid hearing, farmers and civil society organizations raised their concern that farmgate prices of palay dropped as low as P7 per kilo, leaving farmers in a disastrous position. Thus pointing out that price drop was caused by the influx of cheap imported rice as import restrictions were removed under Republic Act 11203 or infamously known as Rice Liberalization Law.

The legitimacy of the concerns raised by farmers and advocates were questioned and worse dismissed by Senator Cynthia Villar, the Chairperson of the Senate committee on Agriculture, Food and Agrarian Reform and author of RA 11203.

Sen. Villar claimed that the dropping of prices was a result of the calamity brought by Habagat. In the contrary, rice watchdog Bantay Bigas cited that prior to the calamity, prices were already low. Sen. Villar also dismissed the aspirations of farmer to have a good price of their palay produce to P21/kg, which Villar called it “SOBRA” or too much.

Now, let’s talk about what is “SOBRA/ TOO MUCH” based on data and grounded assumptions in the context of a Filipino rice farmer fighting for their livelihood.

Assuming a rice farmer owned a hectare of land that is irrigated, yields around 3.9 metric tons per hectare per cropping and can produce twice a year. The national average cost of rice production is pegged at P12.44/kg of Palay. 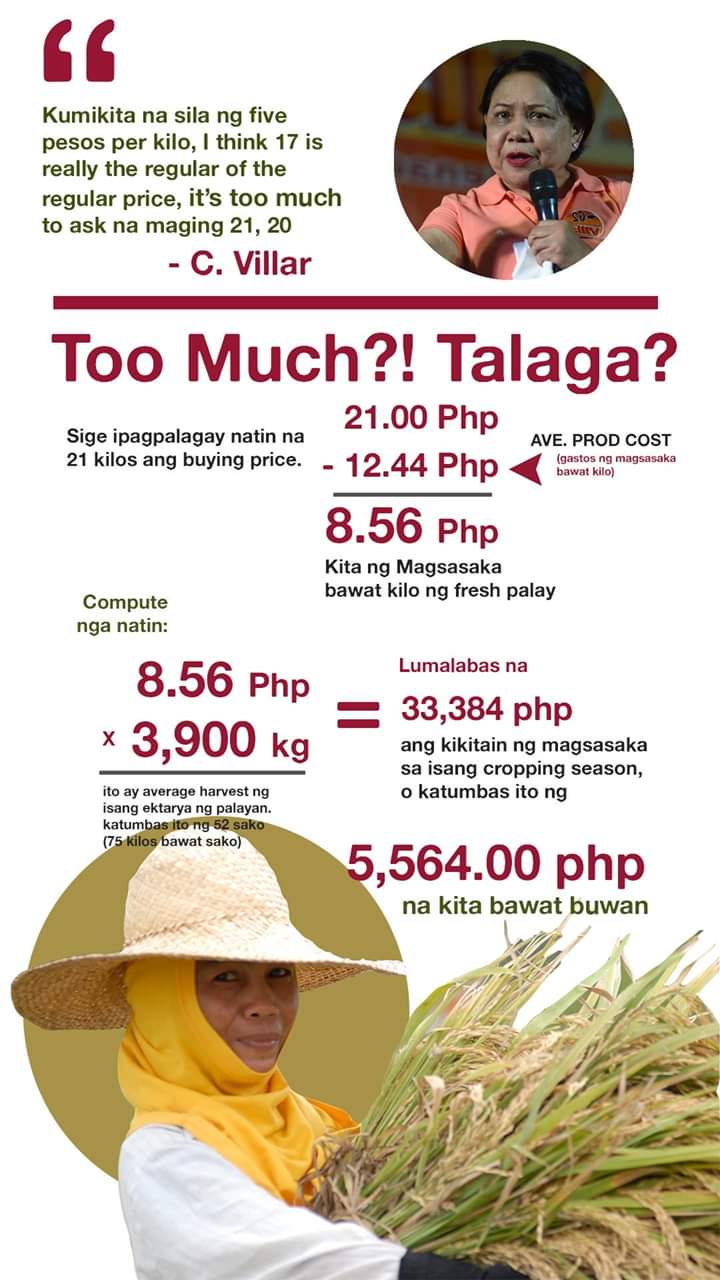 These assumptions are in ideal situations: irrigated land and damages of flooding and drought were not considered, thus conservative in nature.

Is it really “too much” for a Filipino rice farmer aspires to earn P5,564 a month? I wonder where Senator Cynthia Villar is sourcing out her jauntiness amidst the chronic crises brought by government policy that she was responsible of.