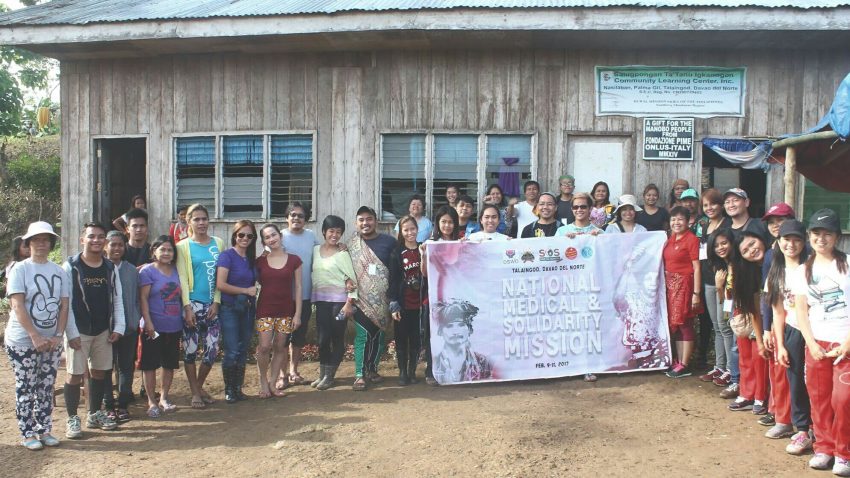 It was supposed to be a routine medical mission. If anything at all, there was an added feel of legitimacy in the activities, for (in what may be a first) representatives of government agencies were on-hand and actively participating in the recently concluded National Medical and Solidarity Mission in Sitio Nasilaban, in Talaingod. Personnel from the National Youth Commission and the Department of Social Welfare and Development carried out crucial components in the overall mission design, such as the children’s feeding program and relief goods distribution. DSWD Undersecretary Mae Fe Ancheta-Templa was there to personally oversee the operations.

It was supposed to be a routine medical mission, so much so that we didn’t think twice about saying farewell to some our colleagues and students from UP Mindanao who were scheduled to leave the site a day later than we were. Our differing schedules had to do with the nature of our tasks at the mission; theirs was to conduct fecalysis on ailing Manobo residents to try to determine what could be causing the spate of gastrointestinal disorders in the area that has been linked to several deaths due to severe diarrhea and dehydration.

It was supposed to be a routine medical mission, but now as the nation knows, it was marred by an event that has actually been marring the routine lives of the lumad of Talaingod for years now.

At noon on the twelfth, as the rest of the mission team was getting ready to depart, word reached them that Alamara paramilitary had not only blocked the roads leading up to Nasilaban, but had threatened the motorcycle drivers who were supposed to pick the mission team up. They were told not to push through, lest they be caught in the middle. Anyone familiar with Talaingod roads know that a delay of even just a couple of hours could mean having to stay one more night, and with the uncertainty sown by the earlier events, it would certainly be a worrying night at that.

To compound things, according to media reports, not only was there movement among the paramilitary, but the 68th Infantry Brigade also arrived and camped in another village an hour away from Nasilaban. But in the days leading up to Sunday, the community leaders and residents reported no suspicious activities. Some of these leaders and villagers had walked for more than a day just to reach Nasilaban; they surely would have noticed if there was anything even remotely out of place, and they would have immediately sent word to the mission organizers. Moreover, the team had conducted a courtesy call with Talaingod Mayor Basilio Libayao on the first day of the mission; why was it allowed to proceed if there could have possibly been a situation? What were the military and the paramilitary positioning themselves for? Was there a scheduled mil-ops that not even the LGU knew about? Or, was the reason for the military/paramilitary movement the presence of the medical mission itself?

I can’t help but lean towards the validity of the last, given the other baffling events that ensued. When the mission team finally made it down to the lowland barangay of Sto.Nino (where a welcoming group of UP teachers, including our Vice Chancellor for Administrative Affairs Dr. Antonio Obsioma, pastors of the United Church of Christ in the Philippines, and other supporters waited for them) on the morning of the 13th, a whole host of security forces suddenly showed up.

There was a police mobile, an army truck, a white Toyota Hilux (plate number AAF 8723), and a white Mitsubishi sedan (plate number XOO 800) whose passengers did not alight, but some of our companions were able to discern that the men in civilian clothes within were taking photos and videos of the members of the mission and welcoming teams. The army truck followed our convoy to the Talaingod Police Station, and army personnel even tried to enter the police station as the mission team leaders were filing their blotter report.

I had no idea what they were trying to do since, being in the town poblacion, we were all clearly already away from the reach of any security threat. Indeed, they were no-shows when there was an actual ongoing criminal act by members of the Alamara who, we later learned, were already known to the police, with one of them even having an outstanding warrant of arrest! At the very least, they contributed more to the discomfort of some of the mission team members who had already undergone a difficult last several hours. At worst, it was the mission members themselves who were considered a threat, with uniformed men hovering over them and watching their every move, and their photographs being taken by unidentified persons without their permission.

It’s apparent that the security forces in the Philippines have gone back to their routine of harassing civilian communities and advocates, especially those who have, and uphold, interests that are contrary to the State’s. While all that was going on, the funny-not-funny image of generals idling about, then suddenly jumping to gleeful attention when the peace talks stalled popped into my head. It was as if they were just waiting around, and at the first rough patch of the GRP-NDFP dialogue, quickly called out to the boys: “As we were!”

So now more than ever, the call must be to continue the peace talks, to continue respecting the agreements of those peace talks (particularly the agreements that protect human rights), and ultimately, to address the real root causes of poverty and armed struggle. Only in doing so can we hope to put an end to the conflict, an end to the need to organize medical missions like this one that fill in the huge gap left by a neglectful government, and an end to placing those who respond to these missions in harm’s way.