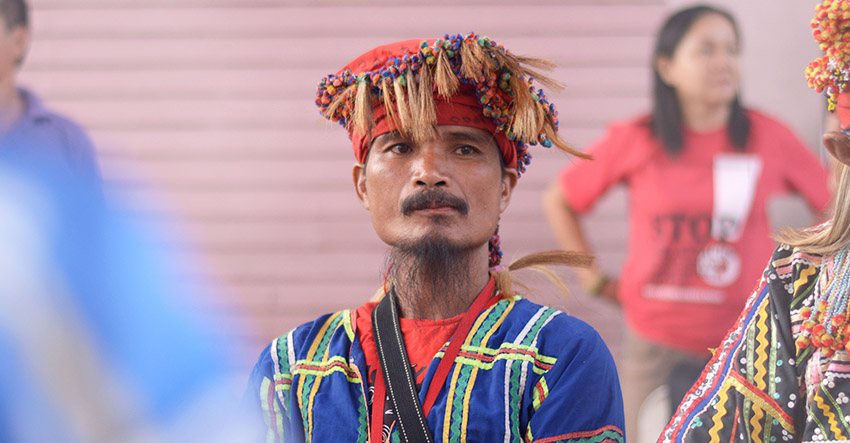 Manobo villages typically cluster along rivers like the Talomo, so following one upstream and downstream is a handy navigation strategy when travelling from one community to another.  At the Talomo, one of these villages is Sambulongan, named after a type of bamboo used to make arrow shafts for hunting and pangayaw warfare.  It was here that I first met Gombil Mansimuy-at, one of the village leaders of Sambulongan, three years ago during my first visit to Talaingod.

Not so tall but lean, Gombil had dark, shining eyes, with a smile that revealed teeth that were just as dark, blackened by years of betel nut chewing.  As we were introduced, he gently corrected the pronunciation of his name from the simple pronounce-it-as-you-spell-it practice common in lowland Philippine languages to one with a sophisticated use of schwa and the sudden dropping of the tongue that collapses the last vowel-consonant combination in the second syllable of his name.  In the following years I would always get the pronunciation of his name wrong, but he would patiently continue to correct me, with a betel nut-stained smile.

As a young man, Gombil had responded Datu Guibang Apoga’s call for a pangayaw against Alcanatara and Sons, which resulted in the logging company’s withdrawal from the Pantaron.  This event, aside from being one of the best examples of lumad triumph against a big corporation, also signaled the start of the Pantaron Manobo’s conscious struggle for self-determination and defense of their ancestral domain.  This was a movement that, because of its beginnings rooted in the awareness that large companies and the State tended to coalesce together under common class interests, purposefully sought alliances with other lumad groups and social sectors whose interests lay at the opposite of the elites’.

At the same time, since the battleground was their homeland itself, their struggle was also patently a lumad one.  For example, before embarking on the pangayaw, Datu Guibang requested that the war epic Tolalang be performed by renowned epic chanter Buburi as part of their battle preparations.  Chanting and hearing the epic, even if it is Tolalang’s name that is explicitly uttered, recalls in the chanter’s and hearers’ minds all the other datus and warriors of times past whose spirits now dwell with Tolalang, or is now Tolalang.  Their pangayaw was, in essence, also the pangayaw of Tolalang in its display of bravery and righteousness.

It is in this context that Gombil came to awareness of his people’s situation, of the forces that could help, or could be detrimental, to him and his family, and their Pantaron homeland. This pangayaw saw the need not just to unite different Manobo villages, but to link with other marginalized sectors to create a movement that was not just for “cultural” ends (in the indigenized sense), or for “economic” ends (to simply reclaim access to natural resources), but for more encompassing political ends with a view to change the very system that made corporate and State collusions against the poor possible in the first place.

For the rest of his life Gombil would straddle these two worlds of struggle:  one which gazed internally into his kith and kin, and the other which looked outward towards the city centers, and more expansive political engagements at the level of the “nation”.

I don’t think anything speaks more of this than the fact that, unlike many men his age, Gombil does not have the traditional Manobo tattoos called pangotoeb.  When asked why, he simply shrugged his shoulders and casually said that he didn’t want to get tattooed.  On the one hand, this shows that the pangotoeb, dissimilar from other tattooing traditions in the Philippines and the Pacific, is not connected to warrior identity or ideology, and individuals are also not compelled to get tattooed notwithstanding personal achievement.  On the other, perhaps this was also an indicator of Gombil’s changing sense of self, in the same way that the Pantaron Manobo is now facing the challenges of being a group in transition.

This would be reflected in how I remember Gombil to be the source of many an eloquent panubad or prayer that invoked not just ethereal spirits, but the very real spirit of collective action.  This would be reflected in how he fearlessly led his people not just in the distant Pantaron Range, but in the capitals of Davao and Manila, in several Lakbayans that would shake the status quo.

Yesterday, we heard the devastating news that Gombil had succumbed to a pneumonia outbreak that is currently ravaging Talaingod.  This is in the aftermath of their return from yet another bakwit since the middle of last year.  Battered by psychological stress and an unhealthy, forced, and prolonged exposure to the city environment they are unused to, their recovery does not depend on simply being able to go back to their mountain homes.  Government promises of providing health services directly to their communities continue to be unrealized, despite the change in regime.  The only comfort here, if any, is that Gombil died not in some evacuation area, but in the bosom of the land he loved, with the whistling of the sambulongan bamboo.

*This Talomo River, which will eventually join the Libuganon and Tagum Rivers, is different from the Talomo that flows through Davao City, though their shared name may also be indicative of shared cultural links in the past.  For those who want to help the Manobos of Talaingod, please contact the UP Mindanao Department of Social Sciences thru 09173270978.