The special role of brave and courageous women

Each time I give birth to my children, I die a little. I was, and still am ready to give up my life for them if need be to protect them, and so that they may live and continue to work for humanity to flourish.

In my entire life, I only saw but once the female combatants of the New People’s Army and I admit I was star-struck, in the sense that I could not imagine myself in their place. They were mostly young and agile, and in the distance, I watched them roaming freely around during the celebration of the 48th anniversary of the Communist Party of the Philippines somewhere in the hills of Davao, where I dared to join a number of journalists in the city who were covering the event.

At the sight of these young girls (as I saw them) in combat uniforms, their faces young and innocent-looking, some kind of pain tagged at my heartstrings. The mother in me was awakened and I thought they shouldn’t have been here; they could have been better somewhere else.

Then I stopped myself when thoughts of gadget-crazed youth in the city seemed to mock the self-righteous in me. 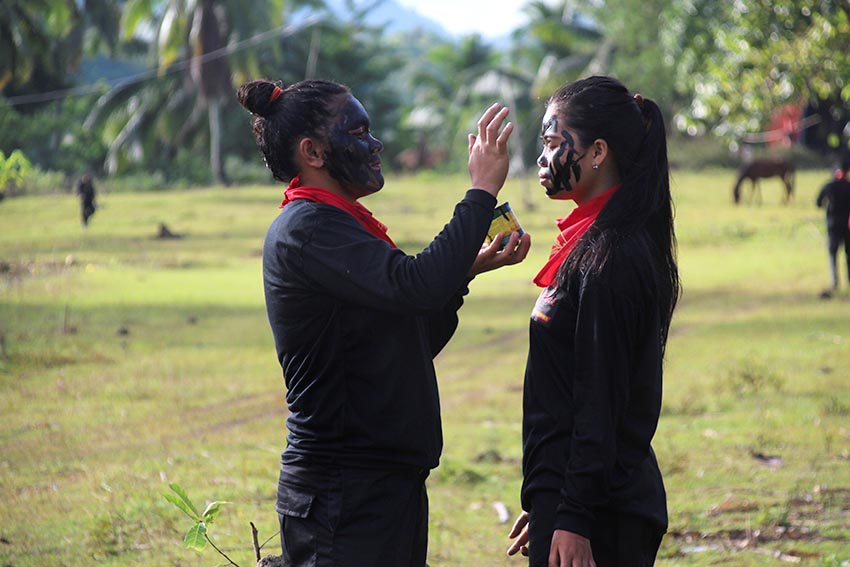 I was amazed and sad, partly, to see them, young people with rifles slung from their shoulders, albeit, so naturally, as if they’re just carrying their bag-pack on their backs like the youth in the city, but the comparison stops there.

In the city, one rarely see young people who are not glued to their hand-held mobile phones, their eyes almost unblinking as they focus on the screen and their hands busily and automatically pressing the buttons even without looking.

Nay, not only the young people but most citizens of this society are seemingly caught up or imprisoned in their “cell”-phones even when walking or riding utility vehicles, but not the youth up in the hills.

While it is understandable that mobile phones are not the vogue in the hinterlands for lack of signals, I do not think that they are taking up arms because it is ‘fashionable’, nor fun, like mobile phones. There is, I guess, a deeper, more compelling reason why they have to live the difficult life of revolutionaries.

While there, I resisted the urge to get a closer look into their lives and passed the opportunity to talk with some of them, at that time, as I felt heaviness inside of me which I still feel today.

Have we failed these young people such that they have decided on their own and among themselves to confront the problems of society at a young age?

As a parent, I feel so guilty with the thought that I seemed to have not done enough to make their world a better place, where they could live in harmony with nature and develop and hone their God-given gifts, instead of toiling and struggling at a young age to do something with the ills of society.

Was our own effort at an early age so inadequate to prepare for their future such that those with the heart and courage to try and change this decaying society had to do it over again?

Or that we hadn’t really made a dent against the gigantic problems besetting our world such that our children now would have to work on these problems themselves, perhaps not for themselves but for their children and their children’s children.

It could also be that they are seeing some of those leaders in the past are now starting to retreat, their bodies aging and their minds refusing to look back, such that the next generation just cannot let the greedy have their day. (davaotoday.com)