To decide and to believe 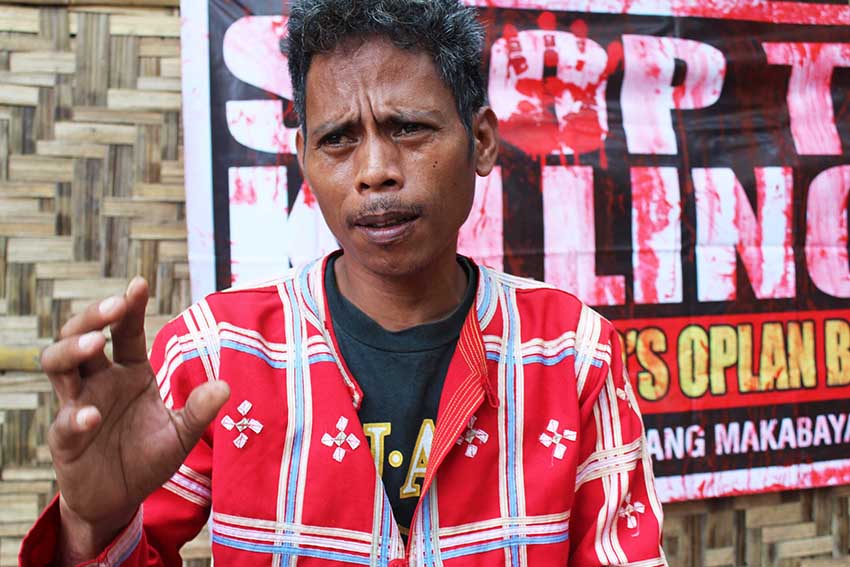 Datu Kaylo Bontulan, deputy secretary of Lumad group Pasaka, in an interview with the media at the evacuation center inside the UCCP Haran compound in Davao City. (Medel V. Hernani/davaotoday.com)

I first met Datu Kaylo in Talaingod in 2013. It was the founding anniversary of the Salugpongan Ta Tanu Igkanugon people’s organization. All the datu turned out, dressed in their festive best: tangkolo headdresses, suning beaded shoulder bags, tasseled sundang blades – the works. Kaylo was there, but self-effacingly only wore a simple kinaraan jacket.

Kaylo was younger than most of the datu. He was only in his teens when the datu of the Salugpongan declared a pangayaw against the Alcantara and Sons logging company. But he tagged along with his older brother, who was already then a recognized bagani. They would scout the trails and lay traps. Kaylo was a witness to the other preparations the Pantaron Manobo undertook in this fight for their lives: how the datu met and discussed, how the women gathered and cooked food which Kaylo – as a fast-footed lad – ferried to the other bagani in their outposts. This was Kaylo’s Pantaron as he came of age.

Thus like Datu Gombil before him, Kaylo belonged to the next generation of Pantaron Lumad leaders whose formative years as a future datu coincided with the intensification of the Pantaron Manobos’ interaction with external actors such as the Philippine State, civil society, and armed revolutionaries.

This afforded him a sophistication in analysis that even many of the older datu – whose orders Kaylo followed in his youth – do not have. For example, though Kaylo initially expressed strong support for Duterte at the beginning of the latter’s presidency, he soon became a vocal critic not only because Duterte had become antagonistic to the Lumad, but also because of Duterte’s other anti-people policies that targeted marginalized sectors apart from the Lumad. Kaylo decided and acted based upon his scrutiny of social issues, and not based upon blind belief in personalities or figureheads. This is certainly more than I can say for many other supposedly more “educated” and “civilized” fellow Filipinos.

Some people may be wondering what Datu Kaylo was doing in the Pantaron when he was already in the relative safety of the evacuation area in Davao City. It is true that while there are many dozens of families who are bakwit here in the city, there are also others who chose to stay behind for various reasons: some take on the responsibility to look after homes and crops of those who evacuated, some find refuge even deeper into the mountains, some are taken in by other, less militarized villages if they have relatives living there.

Somewhat fitting James C. Scott’s study of the “anarchist” tendencies of highland peoples, the Pantaron Manobo likewise value their autonomy and ability to decide for themselves. Thus, while many chose the refuge provided by support groups in Davao City, others are free to remain in the Pantaron.

But choosing to stay back is not without real risks; in militarized areas, people end up dead even if they do nothing except to go about their own business. Recall that early this year in Lianga, Surigao del Sur, Randel Gallego, and Emel Tejero, two Lumad youths who had just gone to collect abaca were summarily executed and then accused by the military of being NPA rebels who fought it out with government troops. And more recently, we heard the same spin about the massacre of 14 farmers in Negros that left the whole country stunned. Kaylo was only reaching out to his fellow Lumad who faced these same risks.

The last time I saw Datu Kaylo he was making beaded accessories with his wife to while away the time. I had only casually said goodbye; it was just another day at the bakwit. They had been here since 2015, and though the past five years have been marked by significant gains and stirring campaigns such as the Lakbayan, it was not always uplifting. Like any drawn-out social struggle, the Lumad bakwit has had more than its share of lull periods, during which the greater challenge was to overcome the ennui of every day, as well as moments of doubt about whether other people even cared anymore.

As a mass leader, Kaylo must have been painfully aware of this. And so it comes as no surprise that, after years traveling all over Davao, Manila, and many other parts of the country, he decided to come home. It was a dangerous decision, but this underscores the urgency of that task, which Kaylo readily took on. This decision may have cost him his life, but Kaylo believed in his people and in their capacity to be decisive and to take the fight into their own hands. He had come of age during such a time – during the 1994 pangayaw – and there was no reason to believe that they could not do it again. (davaotoday.com)