Aimed at investigating killings and human rights violations in Mindanao, the IFFSM volunteers themselves have been subjected to harassment and intimidation. From an overkill of checkpoints with fully-armed soldiers delaying the delegation to an array of placards, hanging and with bold letters: ~OUT~ INTERNATIONAL FACT FINDING SOLIDARITY MISSION TEAM “BIASED GROUP” / WE SUPPORT OUR SOLDIERS OUT FACT FINDING MISSION / #NO TO LIES / #DEFEND MARTIAL LAW / #IFFMS OUT / #WE WANT PEACE / #DEFEND PEACE.

Is the spirit of Kontra here an absent presence of a bodiless swarm? Or something else? Calls to action abound offline without people and with hashtags. Do digital ghosts of troll armies exist? What beings till click-farms? Is the question of Kontra’s spectrality that of hauntology? Let’s put our feet back on the ground:

In the eighties during the Cold War, US President Reagan funded a Nicaraguan armed group called “Contras” to counter the socialist political party, the Sandinistas that defeated the dictator Somoza, a puppet of US imperialism. In 1987, the video game Contra was released. Among the alien enemies? Red Falcon, “the cruelest life-form in the galaxy [that] arrived on Earth (…) to establish a foothold from which he will attempt to conquer our world and then use it as a stepping stone toward his ultimate fiendish goal: domination of the universe.” Our own “version,” too, sustains the military-industrial complex: the Kontra of Orapronobis (Lino Brocka, 1989) led the film’s eponymous vigilante group. In the first few minutes, he shocked the film-viewers by shooting a foreign missionary’s brains out, for the cult’s dinner. Orapronobis kept the graveyard silence of peace and order, perhaps an atmospheric horror for the people of Santa Filomena. Suspected guerrillas and communist sympathizers were abducted, threatened, tortured, tailed, and killed. Fictional but not quite? 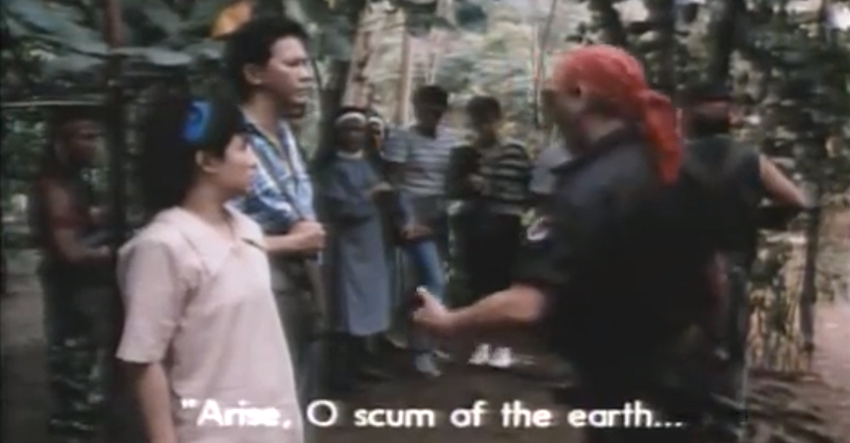 Like saints with an altarpiece, a portrait of Marcos, a poster of Rambo, and an American flag decorated Kontra’s room. Inside, captive civilians Esper and her son defended themselves from the paramilitary cult leader. Daylight revealed the remains of mother and child among the casualties. The colonel framed the tragedy through the media as an “encounter,” the corpses as rebels that recruit minors, and the soldiers as dutiful servants and protectors responsible for the national security. Fictional but not quite?

The film then (until now) shows a scathing parody of Cory Aquino’s post-martial law “restoration of democracy,” hence, painting an “anti-dilawan” picture that Tatay Digong’s children might approve while missing jokes and jabs at their father-figure and idol whose idol is also Kontra’s. The “bayan” now (until then) remains a space, where meanings of words are negotiated, and their substance evaluated in a class war where “nationalism” may manifest in many acts from (1) addressing the root cause of poverty; to (2) consuming Filipino products and promoting Filipino culture; to (3) uprooting and eradicating “evils” or “satans” identified by the state: drug addicts and terrorists; to (4) problematizing “bagani,” which may refer to (a) a warrior that defends ancestral domains, (b) a TV show that commodifies culture, (c) a paramilitary group that complements the government’s armed forces: the “bagani force” and other mercenary varieties.

Longing for an unfulfilled Marcosian “tadhana” (destiny) of “Malakas at Maganda” (the Strong and the Beautiful), the confluence of hauntological Kontra hums the “Martsa ng Bagong Lipunan” (March of the New Society) to commemorate and confront the cancellation or failure of the future (borrowing Mark Fisher’s words), or the ruling clique’s utopian dream of limitless exercise of absolute power. The anachronistic hymn is a killer, its discordance a music to the dictator’s ears to ward off the Internationale.

Repressive measures of the state (tokhang, food blockade, terror-tagging, martial law, etc) shall pass. The “nationalist” soundtrack accompanied by impunity and injustice shall fade out and there shall be days, so quiet that we hear what Arundhati Roy hears: the breathing of another world, on her way. Regardless of signal-jamming modus of mercenary saboteurs and amplified interferences of fentanihilist mouthpieces, take time to listen and locate her inhales, exhales, and sighs. (davaotoday.com)