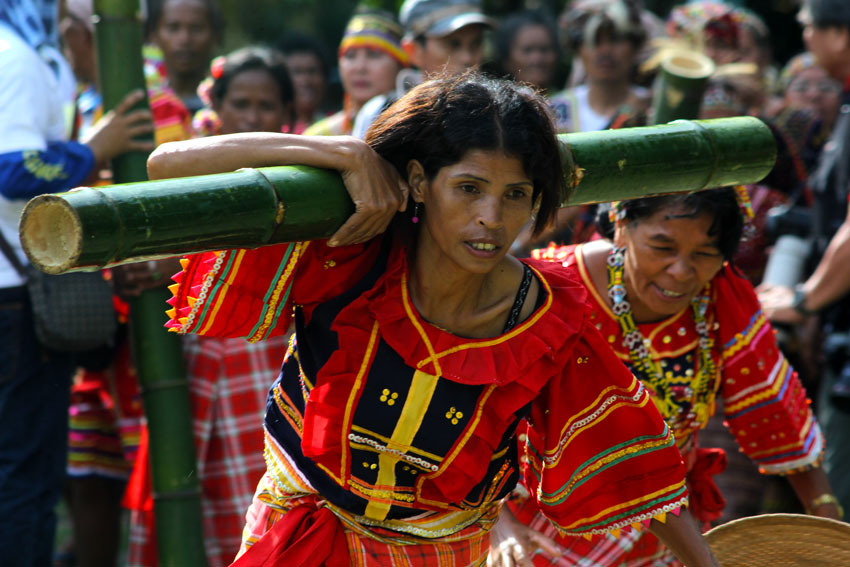 SOSAKORO. This Matigsalog woman runs as fast as she can to pour down her water fetched from a fishpond. (File photo).

Kadayawan asta karaatan maglumon. In English, this Dabawenyo expression means “the good and the bad are siblings”, symbolizing the duality of things: the yin and the yang, darkness and light, the black and white. One cannot exist without the other. For the Lumad in Mindanao, it is one driving or chasing away the other.

That is why even before they start to clear the grounds where they are to plant new crops, they turn to the spirits of the sharpened bolo in Sahakuon so that the bad spirits may be driven away. They ask the good spirits to rule over the bolo so that it may help them while they sow the seeds, hoping for a bountiful harvest.

Then whenever they start celebrating, a white chicken is offered to appease the gods. In this way, whatever omen along the way would be revealed before them.

Our beautiful city celebrates Kadayawan each year, but it does so with little substance. Rather, we are bombarded with the good and beautiful about the lives of our indigenous peoples – in the past.

This is not to say that we must not acknowledge and celebrate this happy occassion. But let us not forget that majority of the Lumad no longer enjoy the festivities we lowlanders witness in this happy occassion. Many of them live in evacuation centers, held hostage by members of the armed forces who employ such acts in the name of fighting or driving away rebel groups in their ancestral lands.

It’s a sad reality, let alone to say that the “Kadayawan” of the old has deserted our Kalumonan, or our Lumad sisters and brothers.

Moreover, not only are they affected by the continuing militarization in their ancestral lands. Other tribes in Mindanao are leaving their communities against their will.

Government authorities have yet to respond positively and truly look into the situation of the IPs. They also need to review the Indigenous Peoples Rights Act or Republic Act (RA) No. 8371, a law supposedly enacted to “recognize, protect and promote the rights of Indigenous cultural communities.”

Some IP groups have pointed out discrepancies at the National Commission of Indigenous People which is tasked to establish implementing mechanisms and other purposes in pursuit of RA 8371 so it works in the Lumad’s favor.

The Duterte administration could well make a real difference in the life of the Lumad if it exerts every effort to truly address their problems. It must not sweep their plight under the rug.

The Lumad are not demanding anything but to be left alone in their communities. They want to live in peace.

They want nothing but to be free, to be on their own, to decide for themselves, to impart their children their ways, and to stand their own. (davaotoday.com)