We Who Seek to Settle: Part 4 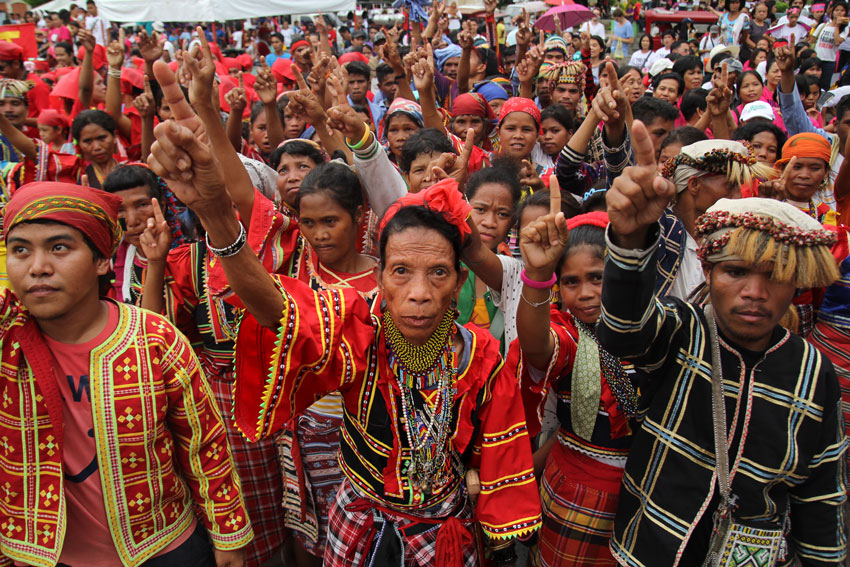 Bai Bibyaon Ligkaw led some 600 Manobo Lumads in joining the One Billion Rising campaign against violence during the Valentines Day. (Ace R. Morandante/davaotoday.com)

As the assumption of the Settlers’ mere utility to state encroachment needs to be questioned, so too is their automatic antagonism against the Lumad and Moro in need of re-evaluation.

The historic role played by the Lumad in Kidapawan reveals the consistent trend of collaboration between Settler and Lumad. The first two mayors of Kidapawan were Lumad, appointed by the American government with settler backing. Even today, Lumad families continue to take seats in the city council regularly.

The paradigm of settlement assimilation as tribal victimization is not entirely accurate, and may not be very fair for the Lumad, specially in Kidapawan. The community being assimilated often deliberately chooses to be assimilated in order to continue exercising power within the community and to enable them to benefit from the services of the state. And the remoteness of the settlements to Imperial Manila often meant the assimilation was not complete. This is demonstrated spatially in Kidapawan: the Americans could not enforce the colonial policy of reducción, while the concentration of settler presence was in settlements like Barrio Lanao, Siawan Ingkal’s tribal domain of Manongol remained the official townsite of the municipal district.

The portions of cultural identity the Lumad gave up (religion, marital practices, or other practices considered taboo by Christians) they often gave up willingly, strategically. This is a side to assimilation not often highlighted. In the end these strategic assimilative choices have been so effective that Lumad identity in Kidapawan remains strong. It has daunting challenges to face of course, but it is tangible enough for these challenges to even be there, tangible enough even to reclaim the facets of cultural identity they had to give up. To demonstrate with contrast, while the Aeta of Negros are so culturally marginalized they do not even have an identity, the Lumad in Kidapawan have their celebrated during festivals, have seats in the local council and have various private organizations to advocate their concerns.

This negotiated assimilation could only have been possible with the collaboration of the Settlers, whose limited access to state power they have often exercised on behalf of the Lumad as well as themselves. At the very least, sympathetic Settlers helped tribal leaders avoid the antagonism of the state by labeling such leaders as ‘friendly local chieftains,’ at most the communities actually gave legitimacy to their leadership over settlements, enabling tribal authority to gain state recognition.

Readers of tribal folklore will be aware that strategic assimilation is not a new strategy for the Lumad. In the epic of the Arumanen Manobo, the Ulahingan, the origins of the Lumad and Moro are traced to two brothers, Tabunaway and Mamalu. Tabunaway, the elder, was the leader of the Banobo (the ancestor culture of the Manobo), and when the Muslims from the West came in the 15th century — identified as the dynastic progenitors Sharif Kabungsuwan and Rajah Baginda — Tabunaway pacified them by telling his brother and his brother’s people to convert to Islam. This strategic assimilation of a portion of their population allowed the Banobo to escape total cultural obliteration, and today the Lumad and Moro alike look on this as a source of solidarity.

On the domestic front, the coming of Settlers was often welcomed by the Lumad, as many of these Settlers came to offer basic services. After finishing his studies in UP Dilliman, my great-grandfather took a ship to Davao in the 1930s and walked to Kidapawan for four days to serve as the rural health nurse in the area (at the time there were yet to be doctors in Kidapawan, and he was often the only one within miles who could provide medical services to the Lumad and settlers alike). Eliseo Dayao Sr was also sent to serve as trial court judge in Pikit. Teachers like Macario Flores or lawyers like Buenaventura Sabulao also came to offer basic services, while Chinese merchants came to barrio Lanao to trade with what the Manobo and the farming settlers had to offer.

My great-grandfather took idle land that the Manobo did not claim, but Eliseo Dayao was the antithesis of a landgrabber. The Manobo chieftain of Nuangan, Datu Musadi Icdang, gave him land to call his own (what is now downtown Kidapawan). He was not alone in this, in M’lang the pioneer settler Hospicio Rivas received the hospitality of the local Manobo, who also gave him land. In return for basic services and continued collaboration to subvert the state, the Lumad gave (or sold) land and avoided being hostile to the Settlers.

Some Settlers in Kidapawan took the collaboration even further by actually marrying into the Lumad: Bernardino Canlas, founder of what is today Barangay Perez, Nitong Hernando, patriarch of the Hernandos of New Talisay, and Arsenio Sibug the councilor and father of Mayor Juan and Vice Mayor Joseph Sibug, are just a few of the settlers who married into the Lumad. Such marriages were beneficial to the Settlers, but it also served both to demonstrate the not-exactly-conquered position of the Lumad and to reassert the importance of Lumad agency as a party to the establishment of the Settlement. This also meant the lines between the Settler and Lumad narrative are not always dichotomized in the first place, but more on that later.

Similar collaboration with the Moro, specially as the state sought to appease otherwise hostile Moro leaders (a silver lining, it can be argued, to the divide and conquer strategy of the Americans), was so evident that when Udtog Matalam was governor of the Empire province of Cotabato, his appointed deputy was Jacinto Paclibar, a M’lang settler who had served as Kidapawan’s mayor. This is the same Matalam, it must be pointed out, who started the Moro Independence Movement in the 1970s.

Settler and Lumad-Moro collaboration became literal during the Japanese occupation of Cotabato province. The guerilla movement, led by Matalam, was composed of Lumads, Moros and Settlers alike, The tribal leader Siawan Ingkal (whose ethnicity is disputed between Manobo and Meranaw) fighting alongside the Cebuano Jesus Gayotin. It was to the interest of the three peoples – and it was an easy thing – to collaborate and subvert the Japanese state.

Dayao, who was caught providing supplies to the guerillas, was killed as a result, a death which is echoed in the killing of many Settler journalists during the Maguindanao Massacre, a political suppression committed by warlord lackeys of the Arroyo administration. In the Mindanao peoples’ struggle against the violence of the Manila-centered state, settlers have bled just as well as the Moro and the Lumad.

The tribal communities even managed to begin subverting the Recto-led ideology of Nationalism that led to the aforementioned localization of the Filipino narrative to legitimize the place of tribal identity in the National discourse: the tension was now Filipino vs. colonial culture, and tribal identity with its precolonial origins easily “hijacked” Filipino-ness in their locales. The culmination of this, I think, was the election of a predecessor of Duterte as mayor of Davao, the Bagobo Elias Lopez. Although assimilated, Lopez succeeded within the Filipino power structure, excelling as a student in UP Dilliman before returning to Davao to become mayor. Lopez practically stole the Promethean fire of Manila education and brought it back to his frontier town, where he was able to use it to ultimately rehabilitate Datu Bago’s historical reputation.

The price the tribal communities paid for such a hijacking of the Filipino position in the local anti-colonial discourse, of course, was to open themselves up to appropriation (it is indeed worth noting that the hijacking of tribal identity as Filipino-ness occurred at around the same time Joey Ayala and Asin were making their Settlerjacking music). But even this the Lumad were able to use for their continued emancipation by further legitimizing their cultures’ place in the National discourse. Settlers, as mentioned, often participated in the struggle to continue emancipating the Lumad, and particularly helpful Settlers were honored by being granted honorary tribal leadership titles like datu and bai – the tribal “savagery” that was once frowned upon is now the prestigious fount of “authentic Filipino” honor.

Today, Lumad and Moro identity is so alive there is even effort among education agencies to provide culturally sensitive education, something only possible if the cultural minority being taught is at least a vocal minority. In some areas, it can be said, tribal identity plays the role that Cebuano or Ilonggo plays in the Regional struggle. In Kidapawan, they even managed to have the city hymn’s lyrics rewritten, with portions of it now saying about the city, “mga katutubo ang nagpasimula.” The tribal peoples have essentially positioned their predominance in the city’s local history.

But the Settler could hardly be described as playing the role of Imperial Manila in such areas. If anything, local settlement authorities since the War have, in the name of localizing the National narrative, made it their agenda to empower the Lumad and Moro and to protect their culture, even at the expense of the settlers. Appropriation, while a theft of culture and a masquerading by the Settler, is nevertheless symptomatic of the Settler’s sympathy – if not downright obsession – with Lumad causes. Today the Lumad – and the Moro – will find the Settler to be more sympathetic to their struggles than to any agenda of the Filipino Nation. I always believed part of the failings of the Bangsamoro endeavour lie in the Moro refusal to collaborate with the Settler population, there would have been enough Regional resentment to work with to recruit Christian fighters in the Bangsamoro insurgent groups. (davaotoday.com)