We Who Seek to Settle: Part 1

(For far too long we have been rendered either invisible under the Manila-centric gaze or demonized as cruel invaders. In this essay, which will appear on this column in several installments, I am seeking to address that, seeking to scrutinize the collective identity of Mindanao’s millions of settlers. The first installment is below.) 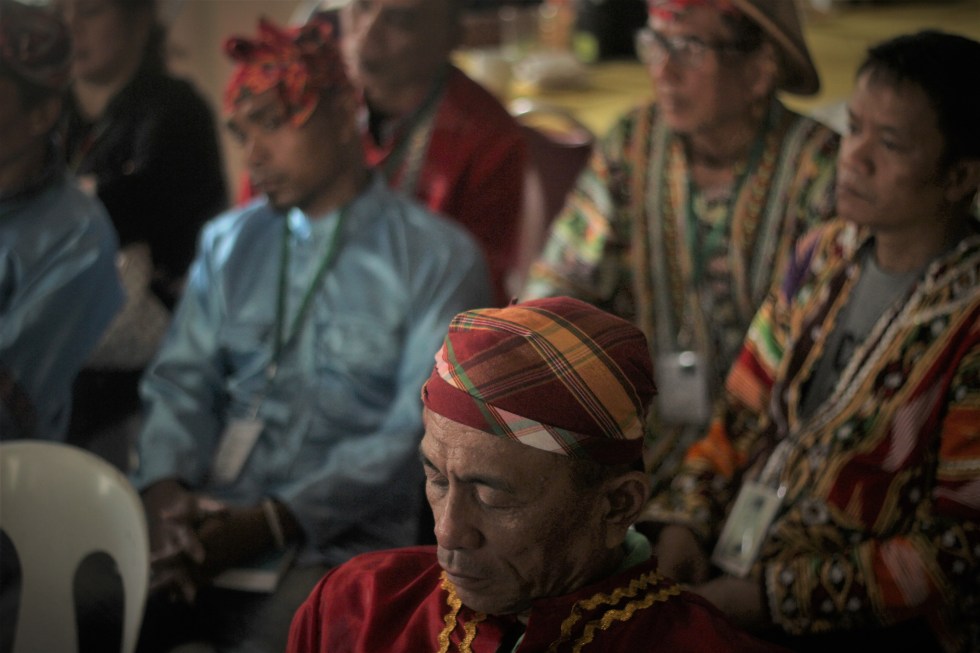 AMENDING THE BBL. The Lumad are seeking for a ‘peaceful’ way of negotiating with the Moros in amending the Bangsamoro Basic Law, to which they say does not include any provisions on their right to ancestral domain. (Mick Basa / davaotoday.com)

The Mindanao settler: few collective identities are as complicated and yet as poorly introspected upon and discussed. Marginalized in the national narrative while paradoxically also guilty of sociocultural oppression in the land of our birth, the Settler’s condition is at once archetypal of the problematique of the Filipino identity and uniquely positioned in the turbulent discourse of Mindanao.

The Narrative of Encroachment: The Mindanao Settler in the Tri-People Arrangement

The very nomenclature of the Mindanao settler foregrounds underlying tensions. We are defined, in the context of Mindanao’s tri-people paradigm, by otherhood: those from Mindanao who are not Lumad (of the twenty or so indigenous peoples) or Moro (of the thirteen Islamized ethnolinguistic groups). The term ‘Settler’ itself implies foreign arrival – we who have come to settle.

Ideologically, it also connotes peace and order – we who are settled – implying unrest and lawlessness with the alternative Lumad and Moro. For not only are settlers foreigners in Mindanao, we and our settlements have also always been the agents of encroachment by the colonial Manila State. When Mindanao is called the Land of Promise, the promise is peace and progress and it is made by the State. And the State displays Settlers to reinforce this narrative.

This otherness and agency for dominion goes at the very heart of our identity as Settlers.

A cruder label for the settler is “Christian,” framing the tri-people paradigm against a religious backdrop. While attempting at positive identity, the term nevertheless proves inaccurate: with the term “Christian” invariably implying “Catholic,” it fails to reveal the complex dynamics of the Spanish-introduced Catholic orthodox with the American-encouraged introduction of the different Protestant faiths. And, particularly in urban Mindanao, there is a growing population of non-Christian settlers (I, an atheist, included). But the term nevertheless serves to highlight the socio-political role religion has played in defining the Settler identity. The Settler is distinct from the Moro (who, historically speaking, are also settlers in the word’s purely literal sense) because the settlement that defines us is Bajo de la campana – under the bells of the Christian State.

The Settlers’ presence, it can be argued, serves as the binary other which defines Moro and Lumad identity: with the encroachment of these Christian invaders, not only are Ancestral Domain and the Bangsamoro given a compelling motivation to be asserted, they are foregrounded into positive existence.

The resulting narratives of Tribal and Moro self-determination are all in conflict with the narrative of the Filipino Nation, which has roots in the haphazard colonial bundling of the archipelago’s independent cultures by the Spanish. And in the Mindanao stage, the role of the encroaching Filipino Nation is played by the Settlers.

The homogeneously colonial nature of settlerhood is structural, not simply historic, and it pervaded even with the wave of Hukbalahap and NPA resettlement during the Magsaysay and Marcos administrations respectively. It is the role settlers inevitably play in Mindanao’s system of meaning. My hometown of Kidapawan, a settler-dominated urban center, has had negligible Spanish history (Spanish colonial control only extended as far as Fort Pikit, and even with American conquest, Tribal and Moro leadership maintained dominance, almost autonomously). And yet the town’s demonym, Kidapaweño, uses Spanish demonymic suffixing.

Such is the homogenizing effect of the trichotomy that where a people is otherwise native to a place in Mindanao, they end up becoming “settlers,” and where they are in fact settlers to the place they end up being dismissed as Lumad or Moro. The former is the case with the Cebuanos of Northern Mindanao, who are labelled ‘Indigenous B’ in anthropological terminology (having lived in Mindanao before the coming of the Spanish), but which are readily dismissed even by writers as settlers. The latter is the case with ethnicities from the nearby Malay countries such as the Sama Dilaut (the Badjao, who have roots more in peninsular Malay world) and the sporadic Malaysian and Indonesian immigrants entering Mindanao via Sulu, otherwise foreigners who are instead stereotyped as Lumads or Moros.

Of course the settlements, it must be pointed out, are not always settler established (and on a side note, not always under the church bells, as is the case with Marawi). Indeed most settlements were engineered by the State (Zamboanga and South Cotabato being examples), but others, like Kidapawan, were domestic creations, a largely tribal space developing gradually into a settlement with successive waves of migrants from Luzon and Visayas. But almost all of them (with the rare and brief example of the Zamboanga Republic) are Manila-sponsored and fall under the influence of the State.

These dual origins of Settlerhood – state and private – mean the narrative of encroachment that defines us Settlers has also been twofold: institutional and individual.

State encroachment is best typified by Davao. Originally a shared space occupied by up to a dozen Lumad and Moro tribes, Davao was conquered by the Spanish forces of Jose Cruz Oyangguren in 1848, displacing the native establishment led by Datu Bago. Davao thus became a settlement, renamed Nueva Vergara, and Oyanguren brought in people from Luzon and Visayas to occupy it.

This history of solid state encroachment meant that the settlers of Davao – who came in successive waves from the Spanish era onwards – have always been Filipino, and have always identified with the Filipino narrative. State encroachment of Davao was utterly successful – reinforced further by the subsequent re-conquest by Americans, and today consummated by the election of a Davao settler as President of the Republic. It is no exaggeration to say that Davao is the most Filipino part of Mindanao.

But state encroachment need not always be martial, and as a matter of fact it has largely civil foundations. If not by military conquest, the state used soft power to insinuate nationhood where it originally wasn’t. On condition of assimilation (“bringing into civilization”), the state offers basic needs – water, electricity, medical care, infrastructure – as well as discursive power – education and social emancipation as equals with people from Luzon and Visayas within the system of the democratic state – to all the Lumad and Moros. Encroachment can be the promise of a better life – this is also why Mindanao is marketed as “the Land of Promise.” Paulino Santos, although a general, encroached into T’boli and B’laan earth in the 1930s thus, by purely civilian means, and he was able to peacefully invent what is today South Cotabato.

This cultural encroachment is a means of creating and positively affirming some semblance of settler identity. Assimilation creates settlers out of Lumads and Moros – they who have been settled – and they are homogenized into the population of migrants from Luzon and Visayas. It is the resulting community of the assimilated and the imported who are called Settlers.

This is state encroachment into ethnocultural ground, and this is the space in which the Bangsamoro struggle occurs. Mostly secure of their physical territory, the Moros instead suffer from such a cultural and discursive assault, an encroachment into their Maratabat, or honor. And their resistance has made the tension once again a military one.

State perpetrated or sponsored massacres of Moro civilians particularly demonstrate the Filipino Nation’s dehumanization of the Moros, from the senseless extermination of the civilians in Bud Dajo by the Americans, to the slaughter of the women, children, and elders of Manili by the Ilaga and the Philippine Constabulary during the Marcos years. There were also massacres perpetrated by Moro leaders against their own kind – from the killing of voters in Tacub to the silencing of journalists in Maguindanao – phenomena that reveal how the State has systematically pit Moros against each other – a crudely typical example of divide and conquer – to reinforce their narrative of settler peace and order.

Davao’s Oyangguren was a conquistador – the historic term used to refer to State sponsored agents of encroachment. His domestic equivalent in recent history was the Kidapawan mayor Augusto Gana. And the term used for the likes of him is landgrabber.

‘Landgrabber’ – private, often agrarian or commercial encroachers into Lumad or Moro earth – is a term of abuse almost synonymously used with ‘Settler.’ Gana, a Tagalog, stood accused of swindling hectares of land in Katindu, Arakan in the 1970s from the native Manobo, led by Datu Ansabu. Ansabu’s son Mambiling and his people waged an armed struggle against this encroachment, from their eviction in 1968 to the cancelling of Gana’s contract by the Department of Environment and Natural Resources in 1989. For two decades the Manobo starved in the mountains while Gana made a cow ranch out of their land, and Mambiling survived only by staging sporadic theft of cows. Even after the State sided with the Manobo, the Manobo had to deal with the illegal Cebuano and Ilonggo squatters – another form of Landgrabber – Gana had allowed into the 720 hectare estate, and they were not able to fully return to their land until 1995.

Mambiling and his people waged against Gana what is called a Pangayaw – a ritual vendetta. It is as symbolically charged as the Moro jihad in defence of Maratabat.

And the Settler’s identity is always at the Kampilan-end of this Martial sacredness. Even as – or perhaps partly because – the Settler’s role in all this blood and landgrabbing and forced assimilation is one of ignorance. As these gross atrocities are being committed by the state and individual profiteers against the Lumad and Moro, we Settlers remain ignorant, an ignorance which to the oppressed peoples only seem deliberate, complicit to the violence. As Gana evicted the Manobo and built his ranch in Katindu, Kidapawan repeatedly elected him Mayor.

The Lumad and the Moro are also in sacred war against us because of our encroachment into their identities, like we were some desert slowly devouring their native growth into our barrenness.

For with nothing but the artifice of Nationhood to fill in the void of our renounced Lumad or Moro identity or abandoned Luzon or Visayas ethnicity, Settler identity is essentially empty, cosmetic and propped-up, as fake as boulders painted pink by DepEd, almost bordering on kitschy.

To give this cosmetic Filipino identity some semblance of authenticity, Settlers have over the generations attempted to give a local touch to the Filipino identity: Davao brandishes the Durian and Duterte, Dapitan has Dakak’s beaches and Rizal, General Santos City has Tuna and Manny Pacquiao. This is much less making the Filipino identity our own and more putting our locales in the Nation’s (state-sanctioned) cultural map. (davaotoday.com)