Why many farmers are against Golden Rice testing 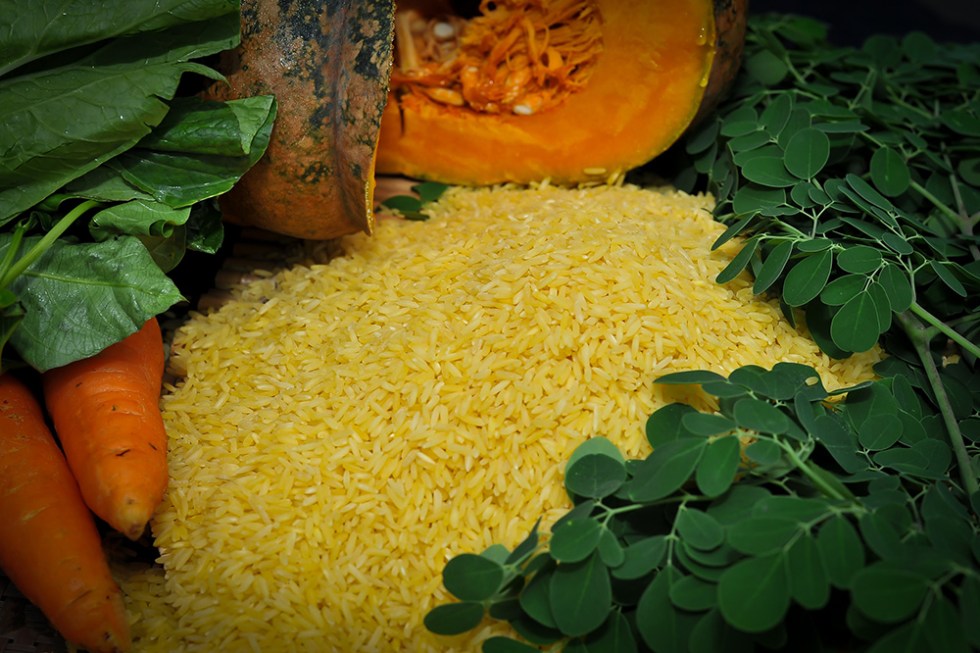 Despite years of vehement public opposition to the field and feed test of Golden Rice in the past decade – a genetically engineered rice promoted for commercialization in Asia, the Department of Agriculture – Bureau of Plant Industry (DA-BPI), PhilRice has filed renewed application this year to open field test the genetically modified crop in the municipality of San Mateo in Isabela and Muñoz in Nueva Ecija.

It also applied for direct use, wherein target populations will be fed with Golden Rice to ascertain if Golden Rice is effective in providing Vitamin A to humans.

More than a hundred farmers had a mobilization on Tuesday, November 7, in front of PhilRice’s gate in Laguna in protest against this new developments, as the institute commemorates its 32nd anniversary.

Golden Rice, a transgenic rice containing beta carotene is being heralded as the solution to Vitamin A deficiency (VAD). The International Rice Research Institute (IRRI) and PhilRice are pushing for the adoption of the said crop. However, the farmers believe that the force behind this push is Golden Rice patent owner Syngenta and other giant biotech corporations including Monsanto.

“The Filipino farmers are strongly calling the DA-BPI to immediately deny PhilRice’s application to field test and feed test Golden Rice. Golden Rice would only further the corporations’ interest to control our agriculture thru the legitimization of seed patents. Also, Golden Rice is fraught with inherent problems. One of which is the low yield resulting to the disruption of the native structure of the rice plant,” said Cristino Panerio , national coordinator of farmer-scientist group MASIPAG.

In 2013, more than 400 farmers, consumers and sectoral group under SIKWAL-GMO successfully uprooted the said transgenic crop in Camarines Sur, Bicol as a sign of protest.

Farmers are worried that the trait can transfer to other rice varieties or weedy relatives through cross-contamination once the open field testing is approved. This will contaminate our indigenous and farmer-bred rice varieties and prove disastrous to the already volatile rice production in the country.

The group also cited that the application for Direct Use would subject vulnerable and uninformed communities to feeding studies in order to ascertain the efficacy of Golden Rice. In a public dialogue on Golden Rice held by the National Anti-Poverty Commission or NAPC in August, medical doctors has warned that there are not enough data presented to establish safety of Golden Rice to human health thus warranting the discontinuation of human feed trials.

During the dialogue, Dr. Gene Nisperos of the Health Alliance for Democracy raised his concern as the target of Golden Rice are members of the vulnerable population such as preschool children and lactating mothers.

“Rice is a staple which you eat in the morning, lunch and evening, 7 days a week, 365 days a year. The proponents are saying that Golden Rice is a food, yet they also state that it will provide 30-50% requirement of Vitamin A to alleviate Vitamin A deficiency. So the question is, is Golden Rice a food or a drug. There are two things, safety and efficacy – you do not talk about safety and efficacy in food, you only talk about these in terms of drugs. Yet Golden Rice is planned for widespread release,” said Dr Nisperos during the dialogue.

The group also stated that the implementation of the Joint Department Circular (JDC) of 2016, the new policy that will oversee the regulation of GM crops, remains wanting. The said circular includes five departments such as the DOH, DOST, DA, DILG and the DENR who are tasked to oversee regulation, safety, precaution and public participation in GM crop applications.

The group cited many gaps and loopholes in the implementation of the said policy citing lack of specific administrative orders of departments on how they will implement risk assessment and regulation of GM crops as required by the JDC.

Moreover, the group also noted the lack of public participation in each level of decision making.

“It is ironic that the JDC of 2016 is a product of the Supreme Court’s decision to ensure that the general public should always be included in every step of the decision making process in regulating GM crops. They were saying that they are holding public consultations but we have never received any invitation, while we have chapters in almost every province in the Philippines,” said Joseph Canlas, Chairperson of the Kilusang Magbubukid ng Pilipinas (KMP) during the NAPC dialogue.

KMP is one of the convernors of the RESIST Agrochem TNCs, a broad alliance of farmers, consumers and sectoral groups against the control of huge corporations in agriculture. The group is also questioning if the departments under the JDC have the expertise, capacity, technology and resources to ensure independence of research and putting premium on the safety of the consumers.

Dr. Chito Medina, MASIPAG partner scientist, said that Health Impact Assessments and Environmental Impact Assessments as required under the JDC should be done by an independent group of experts, and the process cannot be confined from the data presented only by the proponents. (davaotoday.com)