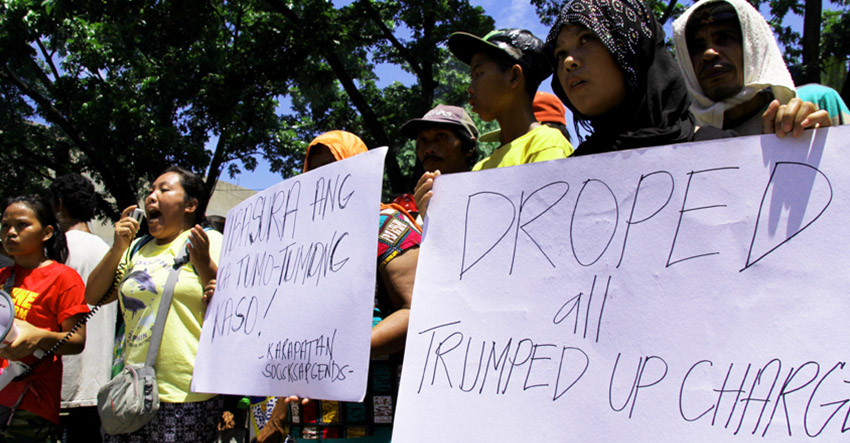 PROTEST.More or less 1000 activist trooped infront of the Hall of Justice, Wednesday to protest the issued warrant of arrest on the 15 militant leaders accused for kidnapping and illegal detention on Lumad evacues in UCCP haran.(Ace R. Morandante/davaotoday.com)

DAVAO CITY – If not for a reporter who showed him a copy of the warrant of arrest, a church leader who was among those accused of kidnapping and serious illegal detention of indigenous peoples evacuees here, would not know about his pending arrest by police authorities.

Reverend Jurie Jaime, a pastor of the United Church of Christ of the Philippines and a convener of the Exodus for Justice and Peace was among those named on an arrest warrant signed a month ago.

Jaime said he was surprised after a TV reporter approached him and handed him a copy the arrest warrant, which was signed last May 13 with no bail recommended by the Regional Trial Court 10 presiding judge Retrina E. Fuentes.

“We were surprised because it was the same case, the same people, but this time there is a warrant of arrest,” he said.

On July 11, 2015, cases were filed against the 15 individuals who were charged with kidnapping, serious illegal detention, and violations of Anti-trafficking in Persons Act.

The complainants said the 15 activists kidnapped and detained Lumad evacuees staying inside the UCCP-owned Haran compound, a sanctuary for indigenous people’s since 1993.

But, two months later the case was dismissed with the resolution dated September 8 saying that the case filed by the tribal leaders against the activists lack sufficient evidence.

The resolution was signed by Prosecutor II Samuel Alencia and approved by City Prosecutor Nestor Ledesma.

For Jaime, the warrant only serves as “another form of harassment against activists.”

“For us, this is really a form of trumped up case,” he said.

“Illegal detention and kidnapping? And the ones kidnapped are evacuees? And they are in hundreds, almost 700 individuals. Can I detain them? Inside our own church compound?” he said.

Jaime said that they are not the only victims of trumped up charges, but many other activists all over the country.

Earlier today, thousands of protesters marched from the Davao City Recreation Center (Almendras Gym) to the Hall of Justice in Ecoland to condemn the issuance of the warrant of arrest.

Bai Ali Indayla, Gabriela Women’s Party’s spokesperson in Mindanao said that the court “should serve the warrant of arrest to President Aquino who ordered to kill the Lumads in the countryside under Oplan Bayanihan.”

“Even the judiciary system in our country shows that it does not favor the people who are the victims of this human rights violations,” Indayla said.

The accused are now consulting with their legal counsels for possible actions, Indayla said.

Jaime said they are hopeful that their case will be resolved immediately.

“This has a political bearing because there is an existing armed conflict, civilians are caught in between. We help them, but we are being persecuted for what we do,” he said. (With a report from Evan Michael S. Clerigo/davaotoday.com)