15 farmers, including minor arrested in Bukidnon, forced to board helicopter 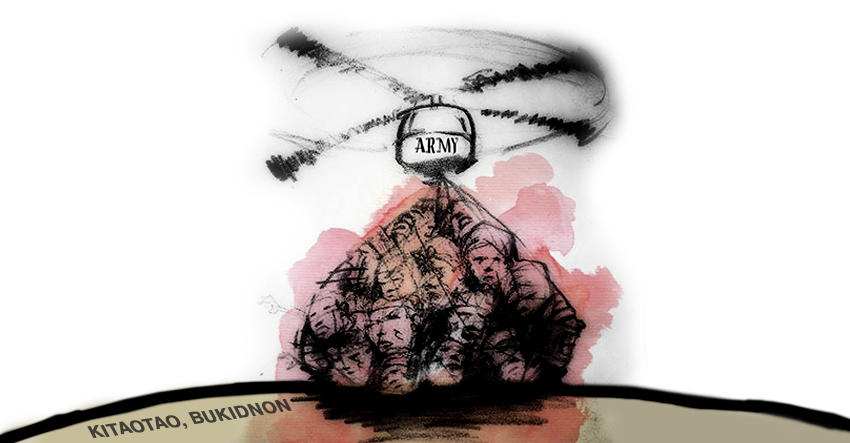 DAVAO CITY – Fifteen peasants including a mother and his 12-year old son were allegedly rounded-up by soldiers and forced to board a helicopter on Thursday in Kitaotao, Bukidnon, a town-based peasant organization said.

Isidro Indao, spokesperson of the Kahugpongan sa mga Mag-uuma Sa Kitaotao (KMK) said they have received sketchy report from its chapter, Nagkahiusang Mag-uuma sa Barangay White Culaman (NAMABAW) that its chairperson, Ellen Manlimbaas, was among those arrested by Army men.

“Troops from (the Army’s) 23rd and 8th Infantry Battalions searched through the houses at Poblacion, Barangay White Culaman since 5:00 am yesterday (Wednesday) and arrested Manlimbaas and the others,” said Indao.

Indao said that the arrested were made to stay at the barangay hall since yesterday and at 8:00 am to lunchtime today, “they were taken aboard a helicopter and taken to Cagayan de Oro in two batches”.

“Evidence like subversive documents, bombs and other materials were planted to have a reason to arrest them,” said Indao.

Indao alleged that White Kulaman Barangay Captain Felipe Cabugnason “had knowledge and consent of the incident and in fact tolerated it even if the rights of the individuals were clearly violated.”

“He demanded to immediately halt the operation of Misfi (Mindanao Interfaith Services Foundation Incorporated) School in Sitio Dao,” he said.

Indao said the school was “requested by the people” and was built thru Misfi last 2014.

Misfi schools and another tribal schools ran by missionaries have complained in May this year that their students and teachers were being harassed by the Army.

The Army has denied the allegations and accused the schools of “teaching IPs (indigineous peoples) to hate the government.”

A post in Misfi Academy’s social media Facebook account a year ago shows administrators, teachers, students and IP leaders in a tribal ritual opening the school classes and its grade seven program.

Meanwhile, Indao said he and other officer and members of the provincial IP and peasant organization Apo Sandawa Lumadnong Panaghiusa sa Cotabato (ASLPC) will conduct an onsite fact-finding mission tomorrow.(davaotoday.com)