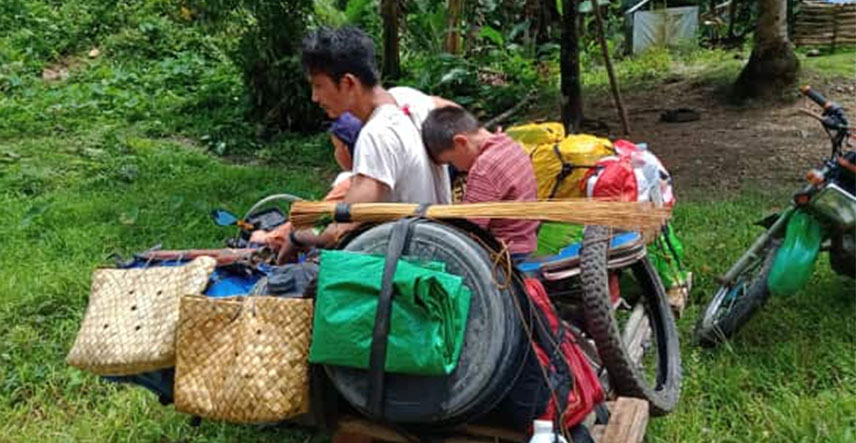 According to an urgent alert posted on Facebook by Caraga regional chapter of the human rights group Karapatan, residents of Sitios Simowao and Sitio Emerald in Brgy. Diatagon evacuated a week after a grenade was allegedly thrown by soldiers at a house where several people were watching television, wounding at least three persons including a five-year-old child.

Karapatan-Caraga bared that troops of the 75th and 36th Infantry Batallions of the Philippine Army, as well as its 9th Special Force Company, have been encamping in civilian communities in the area since August 2019.

In a phone interview with Davao Today, Amad Vargas, a member of Lumad organization Malahutayong Pakigbisog Alang sa Sumusunod (Mapasu) confirmed that the soldiers staying in the Lumad community had a gunfight between NPA members last week.

“After the encounter, the military threatened to attack the civilians if they are again attacked by the NPA,” Vargas said.

Residents of remote Lumad communities in Surigao del Sur have long been demanding for soldiers to leave their communities to prevent such incident. The soldiers, however, refused to do so, Vargas said.

He said that civilians found it hard to sleep at night and tend to their farms due to the military’s threats.

In July 2018, following the evacuation of more than a thousand Manobo people from 15 rural villages in the municipalities of San Agustin, Tago, and Lianga, the evacuees and the provincial government of Surigao del Sur initially came up with an agreement to pull out the military troops from the communities and dismantle the military detachment.

However, soldiers reportedly continued to be encamped in communities, with residents complaining of harassment and vilification.

“We’ve been complaining about this several times, from the barangay up to the provincial government. However, their only response is that they can’t do anything about it,” Vargas said.

“Our only appeal is for the military not to encamp in our communities because we fear that there will be an encounter with their enemies, and civilians will be the ones affected. We are calling (on the public) to help us with our problem…(W)e are asking this to the government, but they won’t hear our grievance,” Vargas added.(davaotoday.com)