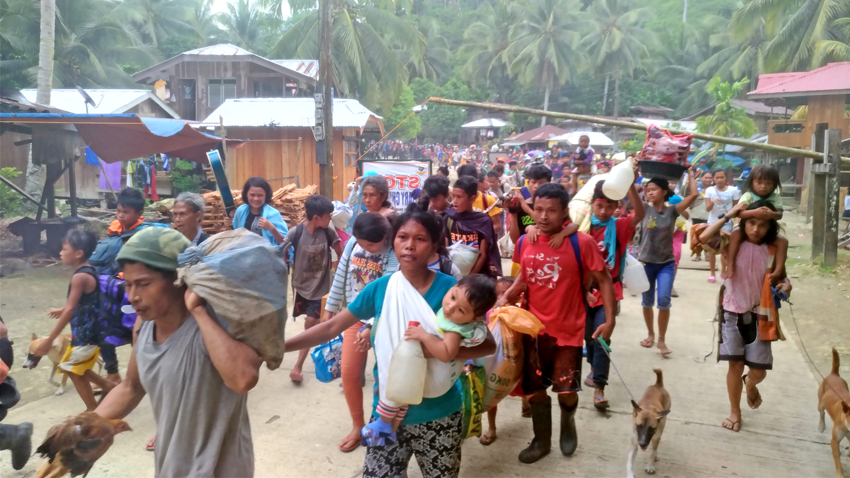 MASSIVE EVACUATION. About 1,600 indigenous people from rural villages of Lianga and San Agustin towns in Surigao del Sur fled their homes on July 16, after a month of military encampment of their communities. Lumad evacuees trek for about nine hours. Despite several army checkpoints, Lumad evacuees travelled to Barangay Diatagon Gymnasium in Lianga to seek temporary shelter. (Mara S. Genotiva/davaotoday.com)

DAVAO CITY, Philippines — Most of the Indigenous People’s in Mindanao are currently facing some “dangerous games” being played by big capitalists and the government, particularly state forces. And these perilous undertakings are taking its tolls on the IPs – to their homes, communities, and identities. When the greed for huge profits play with graft and corrupt practices of those in power, the end result is catastrophic.

Since the imposition of martial law in Mindanao, the IPs and their communities are among the hardest hit. Aside from the cases of evacuations in regions 11 and 12, displacements of IP communities in Caraga region never ceased, as the Armed Forces of the Philippines continues its military operations in far-flung areas in Mindanao.

The Andap Valley Complex in Surigao del Sur is one of the largely militarized areas in Caraga region nowadays. The place now portrays the epitome of the never-ending exodus of ousted IPs from their communities. The crisis is becoming serious every day with the complex turning as “the apple of the eye” of giant capitalists for mining and exploration.

As these capitalists eye the complex, the AFP, particularly the 75thInfantry Battalion of the Philippine Army is also there to protect their interests.

In its latest monitoring, the group Caraga Watch said that a total of 328 Lumad families with 1,607 individuals were forced to abandon their abodes in 15 IP communities in the towns of Lianga and San Agustin in Surigao del Sur last July 16.

These IPs moved out from their areas due to the brutal militarization and human rights violations committed by the 75th IB and the paramilitary group called Magahat-Bagani headed by a certain Marcos Bocales.

They chose to leave Andap Valley Complex “because they have had enough of fear and hunger within the 33 days of the encampment of more than a hundred military troops in their communities,” the Caraga Watch said in a statement issued on July 21.

The group emphasized that the IPs in the complex have decided to leave in order not to succumb to a situation similar to that infamous incident last September 1, 2015, where Lumad leaders Dionel Campus and Datu Jovello Sinzo of MAPASU group were brutally killed by Mahagat-Bagani with the backing of the 75th IB.

The same notorious paramilitary group also murdered Emerito Samarca, the executive director of non-government organization ALCADEV, an education institution religiously advocating for the rights and welfare of Lumad people in the complex.

“The purpose of the militarization of Andap Valley Complex is clear: to remove any opposition against the entry of coal mining companies into the ancestral lands of the Lumad,” the Caraga Watch said.

The Andap Valley Complex has since been the target of huge mining companies, as the place had deliberately been opened by President Rodrigo Duterte for explorations.

The Caraga Watch noted: “Recall that on February 1, 2018, at the Indigenous Peoples Leaders’ Summit in Davao City, President Duterte declared that he will choose the investors in ancestral lands of the Manobo in the Andap Valley Complex in Surigao del Sur. He further told the Lumad gathered to prepare for relocation, insinuating the dislocation of the Lumad from their ancestral homes amidst combat operations of the AFP to ease the entry of plantations and mining projects.”

The group reported that as early as 2015, massive military operations were already launched by combined forces of 36th IB, 75th IB and paramilitary forces in the complex that targeted particularly the MAPASU members in 22 IP communities.

The MAPASU group have signified their continued opposition to the entry of big mining explorations in the area.

The situation in the area has worsened when martial was declared in Mindanao by Duterte, which paved the way for the establishment of a number of military checkpoints in the province of Surigao del Sur, the group said.

“After declaring Marawi free from the Maute group and focusing its military operations to go after the New People’s Army, these checkpoints became stricter especially in Sitio Neptune, Barangay Diatagon in Lianga town, one of the entrances to the Andap Valley Complex,” the group added.

The checkpoints have since limited entry of people and food supplies to the communities, the Caraga Watch continued, adding that teachers of Lumad schools in the area are constantly harassed upon passing through these military barricades.

The military is also telling the people in the area to allow the entry of huge mining companies to operate in their lands to escape further persecution.

“These mining companies have been raring to operate since 2015 but were constantly prevented because of the refusal of the Lumad communities to sign the Free Prior Informed Consent (FPIC) agreement,” the group said.

The mining companies and their protectors from the AFP, driven by their desire to operate inside the complex, designed a ‘divide and rule” tactic that proved disastrous to IP communities in the area.

They exploited and utilized the group of Marcos Bocales, Magahat-Bagani paramilitary group.

The group said Bocales is a fake Datu or tribal chieftain who was appointed by the National Commission on Indigenous Peoples.

“In lieu of the FPIC of the MAPASU community, the Duterte government can portray him as the representative of the Lumad and allow the entry of coal mining into the Andap Valley Complex,” the group emphasized.

The group said the Duterte administration is the same with the previous administrations of Gloria Macapagal-Arroyo and Benigno S. Aquino III: they are all pushing for coal mining especially in the ancestral domains of IPs.

“The Duterte administration has opened the energy industry to foreign investments issuing Executive Order No. 30 last June 2017. The order established the Energy Investment Coordinating Council or EICC to facilitate the processing of energy projects and investments which are considered ‘with national significance,’” the Caraga Watch added.

“This signifies a relevant increase in the number of coal mines targeting 33 new coal operating contracts (COC) to advance to its development and production phase within the years 2018 to 2020 including Benguet Corporation, Abacus Coal Exploration and Development Corporation, and the Great Wall Mining and Power Corporation which are yet to operate,” they added.

Caraga Watch also expressed support to the Lumad communities in their struggle to defend ancestral lands from the destruction of coal mining.

“We denounce the Duterte government and the AFP in their utter disrespect of the Lumad people’s right to protect their land from destruction and for their right for self-determination,” the group concluded. (davaotoday.com)