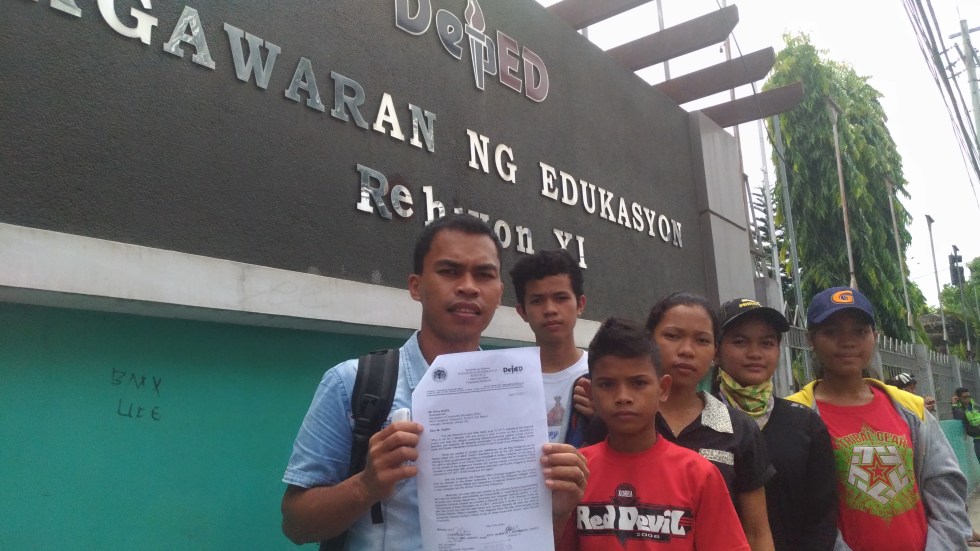 Ramil Miguel, a Manobo high school teacher at Salugpungan Ta Tanu Igkanogon Community Learning Center in Barangay Palma Gil, Talaingod town, Davao del Norte holds a copy of the letter from the Department of Education Region 11 informing them that the issue of harassment and threats against Lumad schools and teachers should be raised to proper government agencies. DepEd 11 argues that it is not the mandate of the education department to hear such cases. Miguel is joined by Lumad students who also held a protest action in front of the DepEd 11 office in Torres Street, Davao City on Monday, July 3.

DAVAO CITY, Philippines — The military dismissed a member of its Citizen Armed Force Geographical Unit on July 1 after they verified that the militiaman had indeed fired upon a school in Talaingod town in Davao del Norte.

Initial reports linked the shooting to a squabble with school teacher Ramel Miguel, who said Butanlog fired upon them after he refused to answer the latter’s questions about the schools legality.

The incident resulted into the suspension of classes, and the evacuation of students to Davao City. Hundreds are now camped outside the Department of Education Region XI headquarters here after they transferred from the Department of Public Works and Highways Warehouse in Panacan.

However, in a phone interview with Davao Today, 60th Infantry Battalion Civil Operations Officer 2nd Lt. Amadeuz Celestial said that they may have to set the CAFGU, Rodel Butanlog free because they no longer have jurisdiction over him.

“Wala rin naman kaming magagawa dahil hindi naman kami pulis. Ang pulis, hindi rin makakapagaksyon sa sariling capacity kung wala namang formal complaint (We can’t do anything about it because we are not the police. The police, meanwhile cannot act on their capacity in absence of a formal complaint),” he added.

However, a network of Lumad schools in Southern Mindanao region said the army’s move is not enough.

Rius Valle, spokesperson of Save Our Schools Network said the military, particularly the 60th and the 72nd Infantry Battalion were just escaping prosecution by dismissing Butanlog, also known as “Ang-angoy” from service.

“They are merely making a scapegoat out of Ang-angoy Butanlog by making him appear like he’s the bad egg. But in truth there are many more Ang-angoys in the paramilitary wreaking havoc all over Lumad communities in Mindanao. We find them in Muling, Kapalong where Alamara members threaten to kill the parents of Misfi Academy. We find them still in Surigao del Sur where the killer of Alcadev director Emerito Samarca is still roaming around the communities” said Rius Valle, spokesperson of the Save Our Schools Network said in a statement.

“It is a move similar to Pontius Pilate by washing their hands from any involvement of recruiting and mobilizing paramilitary forces in our communities,” Valle said.

In earlier interviews, Valle said they will pursue cases against Butanlog and his military superiors as soon as pertinent documents and affidavits are ready.