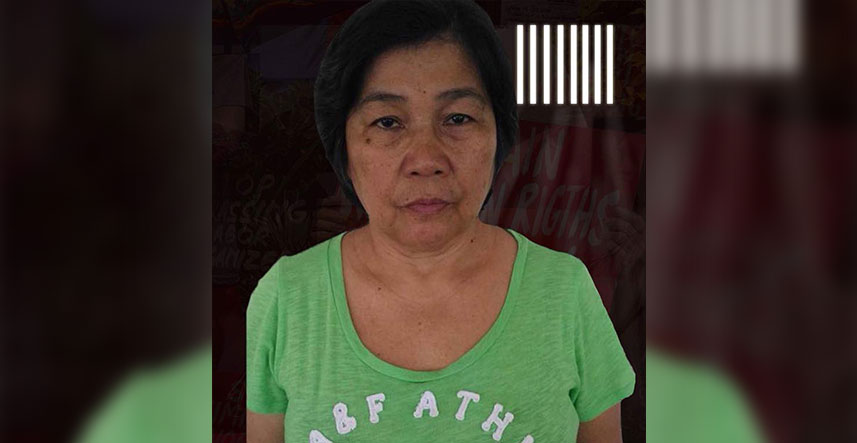 CAGAYAN DE ORO, Philippines – International human rights groups join Karapatan in calling for the release of 62-year old Teresita Naul, a human rights defender who will face trial this Friday, July 17, on charges that she is a top leader of communist rebels.

In a joint statement released Wednesday, the groups Civicus, World Organization Against Torture, and Karapatan appealed for Naul’s release, saying the charges against her are fabricated.

Naul is a council member of Karapatan and a long-time human rights defender based in Northern Mindanao. She was arrested at her home in Lala, Lanao del Norte last March 15. Authorities charged her as secretary of the Communist Party of the Philippines’ Regional White Area Committee in Northern Mindanao.

She is facing trial on charges of arson, kidnapping and detention issued by a court in Bayugan, Agusan del Sur, a government news report says. Authorities also claimed Naul was with a group of New People’s Army fighters responsible for an attack on the military in Agusan del sur in December 2018.

The rights groups refuted the claims, and said that at the time of the alleged attack, Naul was at a health facility in Cagayan de Oro undergoing a medical examination on her ailments.

“Teresita, a women human rights defender should never have been detained in the first place, and we call for her immediate and unconditional release,” said Josef Benedict, Asia-Pacific civic space researcher for Civicus, in the statement.

Benedict said Naul’s case highlights the “increasing use of trumped up charges to silence those speaking up peacefully to exercise their freedom of expression.”

The groups also assailed how Naul’s health has deteriorated due to the unsanitary and overcrowded condition at the Agusan del Sur provincial jail which made her suffer from asthma and bronchitis.

The said family and lawyers of Naul have been denied access to her.

“My mother is frail and her health is declining by the day. She has a breathing disorder and is constantly exhausted after being made to clean toilets. Authorities should let her stay at home under house arrest during her trial. Imprisonment is putting her life at risk,” Naul’s daughter, Ana, was quoted on the group’s statement.

The groups said they are including Naul’s case in their global campaign called #StandAsMyWitness to be launched on Nelson Mandela Day on July 18. The campaign is led by Civicus, OMCT, Amnesty International and FIDH (International Federation for Human Rights).

“Naul has dedicated her life to protecting the poorest and the most marginalized. She advocates for their right to health and other basic social services,” the statement said.

Civicus is an international global alliance focused on supporting citizen action and civil society movements, while the OMCT is the world’s largest coalition of NGOs fighting against detention, torture, summary and extrajudicial executions, forced disappearances and other forms of violence. (davaotoday.com)