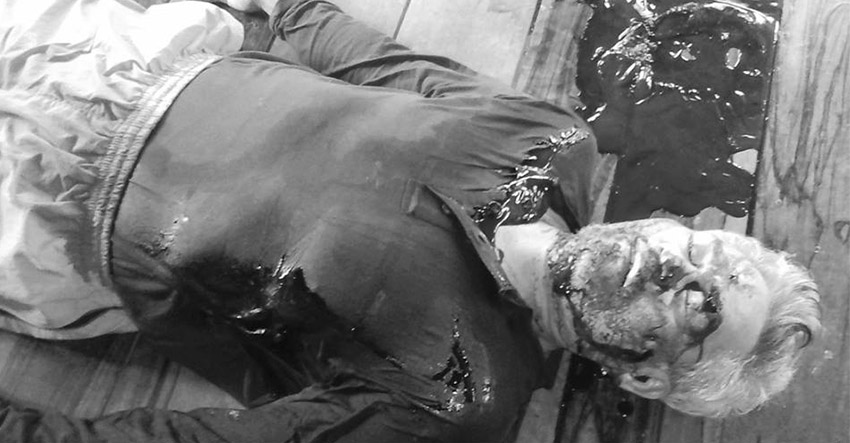 Samarca was last seen tied around the neck and extremities, neck was slit open and with a stab wound in his left side in one of the classrooms of ALCADEV. (Photo and caption from Karapatan sa Caraga facebook account)

DAVAO CITY – A human rights group here has tagged the military as behind the killing of the executive director of Lumad school in Surigao, and described it as part of a serial killing of those managing the tribal schools elsewhere.

“We take notice that these killings were not isolated cases; these are part of the serial killings happening now in Mindanao, and in some parts of the country, whose perpetrators are military elements and their own-created militia,” said Surigao Bishop Rhee Timbang in a statement.

Timbang said the “targets” of the killings “are persons and communities earlier tagged by the military as government critics, left-leaning and rebel supporters.”

“Eyewitnesses identified the elements of the 36th IB (Infantry Battalion) and Special Forces of the Army with members of the Magahat-Bagani Force who opened fire and sprayed bullets to Campos and Sinzo to their death,” he said.

He said the “perpetrators detained Samarca in the school, tied his neck, bound his hands and feet, and later, was found dead with stab wounds.”

The Sunhra said 260 families of about 2,000 individuals, have evacuated to Tandag City, from Lianga, Surigao del Sur “to avoid the rampaging military elements of the 36th IBPA and Special Forces and the Magahat-Bagani Force.”

Timbang attributed the incidents to the implementation of the state’s insurgency plan Oplan (Operation Plan) Bayanihan which he said wants to “accomplish its self-imposed deadline to terminate insurgency in the Philippines.”

“Oplan Bayanihan makes anybody who legally works for the well-being and development of people and communities and advocates for their rights and empowerment as qualified target for military liquidation,” he said.

He said “lumad communities and their schools and those who work for them” face the “brunt” of the operations.

The Eastmincom in a statement said they “(support) the law enforcement efforts” of Surigao police on the incident.

“We shall not let these criminals roam around and threaten the peace-loving people of Surigao del Sur. We will help the PNP secure the communities,” Col. Purisima said  .

In Southern Mindanao, the Lumad-owned and missionary-run schools Salugpungan Ta Ta’Nu Igkanugon Learning Center Incorporated (STTILCI) and the Misfi (Mindanao Interfaith Services Foundation Incorporated) Academy have also complained of having made target of Army operations in the Davao Region.

School administrators said Army troops camp inside their schools and brand their teachers as members of the New People’s Army.

The area is where an alleged illegal arrest of 13 individuals happened last Thursday.

Some lumad residents from the said areas are now in Davao City, given refuge by protestant United Church of Christ in the Philippines.

Sunhra-Karapatan said they wold demand that President Aquino “directs authorities on the incident in Surigao and in other cases in Mindanao to file charges against the perpetrators and to put them in jail.

“We task President Aquino to stop Oplan Bayanihan, disband paramilitary groups and bring impunity to a halt, that in so doing he not only dignifies the life and memory of his own father, former Senator Benigno Aquino Sr. who was a victim of extra-judicial killing,” said Timbang.(davaotoday.com)