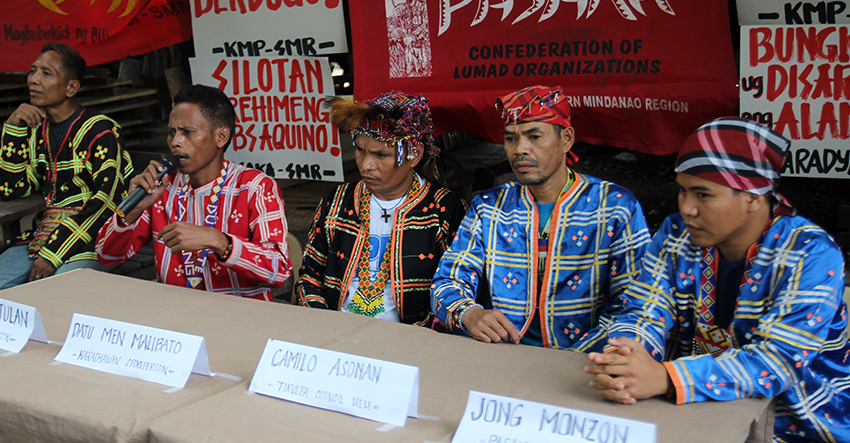 BACK UP. Lumad leaders seeking refuge in a church compound in Davao City, throw their support to 15 activists who are wanted for alleged kidnapping and serious illegal detention of indigenous people evacuees. (Earl O. Condeza/davaotoday.com)

DAVAO CITY – Lumad leaders who sought refuge in a church compound here backed the 15 activists who were issued with arrest warrants for alleged kidnapping and illegal detention of the evacuees.

Datu Kaylo Bontulan, spokesperson of Pasaka Confederation of Lumad Organizations in Southern Mindanao “strongly attests” that they were not kidnapped, but voluntarily evacuated their communities.

As of now, there are about 400 Lumad people staying inside the Haran compound of the United Church of Christ of the Philippines. Some of them are returning to their communities in Talaingod and Kapalong towns in Davao del Norte province, Bukidnon, and North Cotabato.

The 15 leader activists, according to Bontulan, helped them on their plight to seek for a refuge here in Davao City.

Bontulan said that the case filed against the leaders, from which stemmed the warrant of arrest, is “unbelievable,” adding that “anyone can understand that 15 individuals cannot kidnap more than 700 or 800 of us.”

The accused activists got knowledge of the said warrant arrest just on Tuesday, June 28, but the order was signed on May 13, 2016.

Bontulan said that there will be no warrant arrest if there is no militarization in their community.

“They (military) control our time to farm, they encamped in our schools and communities, they closed our school, so that’s why we decided to evacuate,” he said.

For Camilo Asunan, a council member of Ticulpa or Tinananon-Culamanon Lumadnong Panaghiusa, an IP organization in Bukidnon province, this warrant is made to silence them from voicing their plight.

“The government knows that we will not be silenced by this case,” Asunan said.

The Lumad leaders hoped for the new President Duterte to investigate the said case and to dismiss the charges against their supporters.

Datu Mentroso Malibato, spokesperson of Karadyawan, a Lumad organization in Kapalong, Davao del Norte is hopeful that the new administration “will act upon the case as soon as possible.”

He added that they also hoped for the Duterte administration to help them return to their communities. (davaotoday.com)