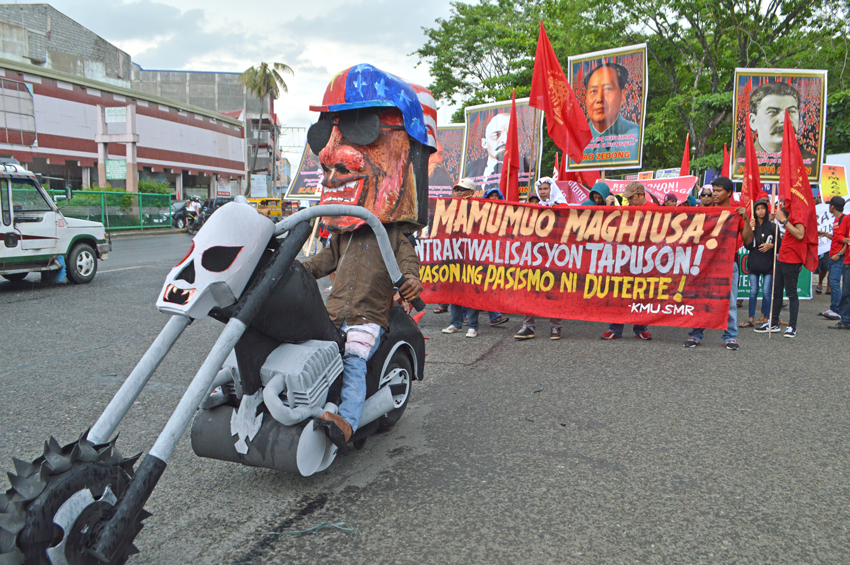 DIFFERENT DUTERTE. Labor groups led by Kilusang Mayo Uno in Southern Mindanao (KMU-SMR) bring an effigy of President Rodrigo Duterte as they march from Magsaysay Avenue to Roxas Avenue in Davao City during the commemoration of Labor Day on Tuesday, May 1. The labor group said the effigy portrays the economic and political repression against workers under the Duterte administration. (Medel V. Hernani/davaotoday.com)

DAVAO CITY, Philippines — The Center for Trade Union and Human Rights (CTUHR) on Monday affirmed the result of a study presented by the International Trade Union Confederation (ITUC), saying that the Philippines, under the administration of President Rodrigo Duterte is among the 10 worst countries for workers’ rights.

The ITUC Global Rights Index 2018 ranked 142 countries based on 97 internationally recognized indicators where workers’ rights are best protected in law and in practice.

In a statement, CTUHR Executive Director Daisy Arago said: “The ITUC Global Rights Index 2018 report re-validates CTUHR own findings that the Duterte administration is no different from the previous governments or even worse in its attacks against the rights of Filipino workers.”

The group described the present administration’s dealing with workers’ rights as “worst and harshest.”

“The consistent low ranking of the country in Global Rights Index reflects the continual structural failure of the Philippine government to stem the deteriorating state of human rights of the Filipino people,” CTUHR said.

The continuing anti-worker and tyrannical rule of Duterte, the group added, is apparently fueling the so-called economic growth for a handful few families and corporations.

Key findings of ITUC report include:

“From attacks on civil liberties, the arbitrary arrest, detention, and imprisonment of workers, the erosion of collective bargaining and the increasing criminalization of the right to strike to the exclusion of workers from labor protection, violations of workers’ rights are on the rise. This is a global threat to democracy and security. Governments must act in the interest of working people. They need to change the rules to stop the violations and end corporate greed,” Burrow said.

CTUHR also bared it already recorded 29 victims of extrajudicial killings (EJKs) in the labor sector two years into the administration of Duterte.

The number is more than twice of the 12 victims of EJKs among workers and urban poor documented during the first two years of the former administration.

Adding fire to EJKs and the repression of civil and political rights in the country is Duterte’s propensity of labeling progressive groups and critics “communist fronts” and the imposition of martial law in Mindanao, the group noted.

“From June 2016 to March 2018, CTUHR documentation points to 133 of these cases victimizing 3,345 individuals. These are spread to 809 victims of red-tagging, 358 victims of threat, harassments and intimidation and 98 victims of arbitrary arrest and detention resulting from filing trumped-up criminal charges.”

The latest attack on the labor sector cited by CTUHR is on the case of Juan Alexander Reyes, a leader of Samahan ng mga Manggagawa sa Quezon City (Association of Workers in Quezon City) and an active convenor of Defend Job Philippines.

On June 2, Reyes was abducted in Quezon City and was later found detained in Camp Crame where he was charged with arson, murder and illegal possession of firearms and explosives.

The group condemned such dirty tactics done to workers and labor leaders, such as in the case of Reyes, and labeled the same as ridiculous and plain harassments aimed at warning labor rights defenders to stop their advocacies.

“The Duterte administration cannot pacify the seething anger of Filipino workers over his failed promises of ending contractualization. On the contrary, the EO 51 that the President signed which changes nothing on pervasive practice of contractual labor only fanned the trade unions’ fury instead of dousing it. Amidst the harsh impact of TRAIN Law, such anger is becoming more pronounced and addressing it by force smacks Mr. Duterte’s pronouncement about pursuing peace,” Arago added in the statement.

The group also urged the administration to certify as priority pending legislations in Congress such as National Minimum Wage Bill, Regular Employment Bill and Occupational Safety and Health Standards Act to provide some relief to the country’s more than 40 million workforce.

“In doing so, the administration can help control the country’s presence to the 10 worst countries for workers’ rights,” CTUHR said. (davaotoday.com)