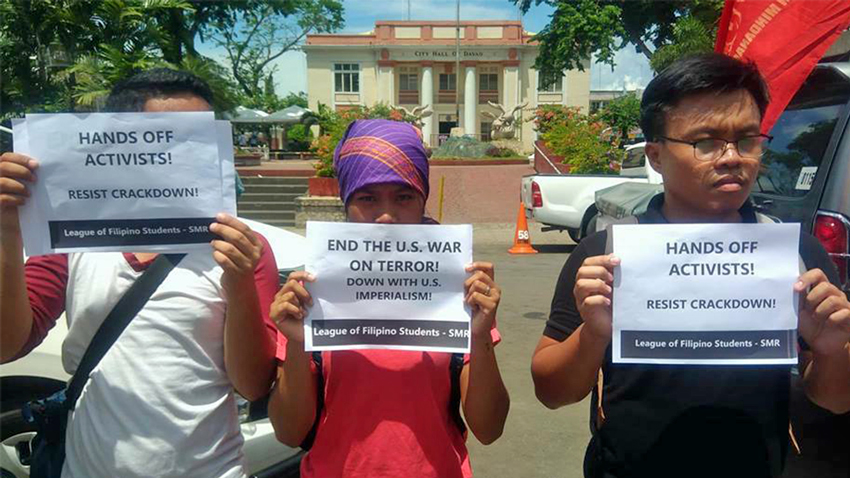 DAVAO CITY, Philippines — Members of the League of Filipino Students-Southern Mindanao region held an indignation rally, Friday, in front of the City Hall to protest the detention and forced deportation of Moro activist Jerome Aba.

Abdul Sissay, LFS-SMR spokesperson, slammed the harassment made against Jerome Aba who was detained and tortured in a United States airport last week and the Philippine government’s apathy to protect the right of its own citizen in a foreign land.

Sissay added that the abuse heaped on Aba is only one of the increasing human rights violations perpetrated or backed by the Duterte administration.

At the House of Representatives, the Makabayan opposition bloc has filed a resolution which sought to probe the detention and torture of Aba by the United States Homeland Security and Customs Border and Protection.

Zarate decried how activists remain under attack in the Philippines and in the US.

Zarate also cited the detention and expulsion of Australian missionary nun Patricia Fox, as well as peasant activists who were killed.

“This just goes to show the striking fascist similarities between the Trump and the Duterte administrations. People all over the world should condemn this deplorable acts,” the Davao-based solon said.

“What is the US and Philippine governments so afraid of? Are they so paranoid and scared that the whole world would know the horrid human rights situation in their countries? They should stop harassing activists,” he added.

In his testimony during a press conference in Manila, Aba recounted his ordeal at the hands of US authorities.

Last April 17, Aba, a Moro and human rights activist and chairperson of Suara Bangsamoro, was briefly held by Immigration agents at the Ninoy Aquino International Airport on his scheduled flight to US.

He was invited by the Human Rights Office of the Global Ministries of the United Methodist Church to be a resource speaker at the 2028 Ecumenical Advocacy Days in Washington, DC.

When he was held at the Manila airport, he was asked if he would be participating in rallies in the US. He was also subjected to separate random security checks.

Upon arrival at the San Francisco International Airport, Aba was escorted by two officers and was brought to the Homeland Security office where he was left alone in an empty room, his belongings and phone confiscated.

Aba was interrogated for 12 hours by different officers and was denied food, sleep and access to a lawyer.

He was forced to admit that he was a “terrorist and communist despite his truthful answers.

At one point, Aba was made to strip naked in front of a large industrial fan inside an air-conditioned room.

He was forced to sign a blank waiver attesting that he was treated humanely by the officers. He was later deported back to the Philippines.

“The harrowing experience of Jerome Succor Aba, including his torture from the hands US Immigration agents, is highly condemnable and a grave violation of human rights,” the militant lawmakers wrote in the resolution.

“The said acts are not only an affront to the rights of an innocent Filipino citizen who was validly invited and granted travel documents for his US engagement but, a serious affront as well to the Philippines, for which the government should rightly protest,” they added. (davaotoday.com)