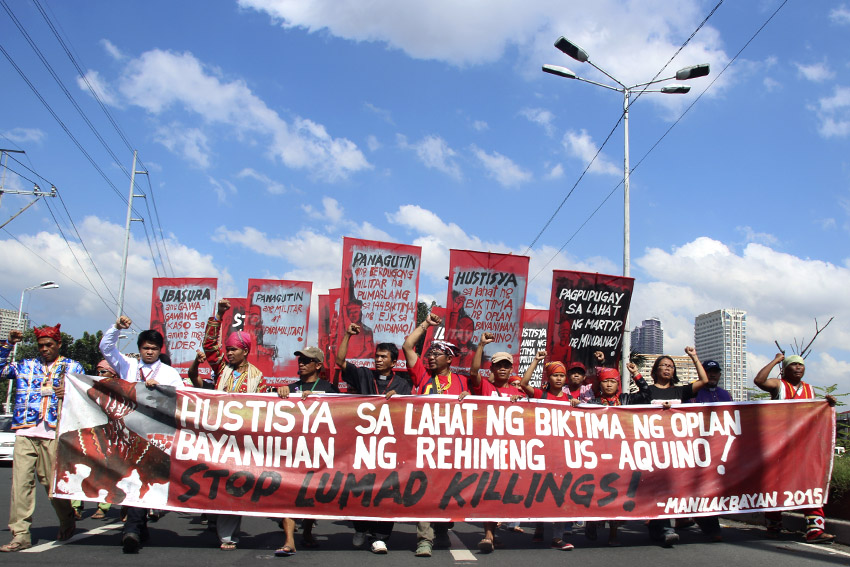 On Thursday, Lumads from Mindanao, together with support groups, march out of their camp in Liwasan Bonifacio to the Department of Justice in Manila calling for justice to the victims of the government’s counter-insurgency program, Oplan Bayanihan.

MANILA (Updated 3:53 pm) – About 500 lumads and human rights activists marched from Liwasang Bonifacio to the national office of the Department of Justice Thursday morning to seek for immediate action on the cases of human rights violations in Mindanao. 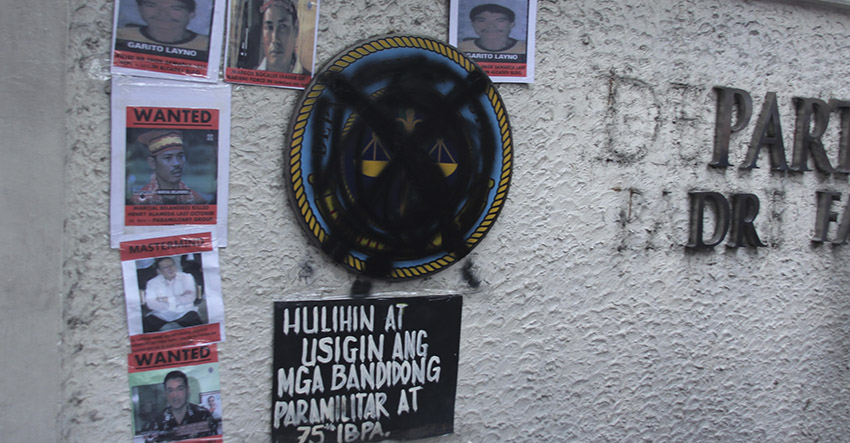 Protesters carried photos of victims of extra-judicial killings of indigenous peoples, left them at the wall of the building and defaced the markings of the office. 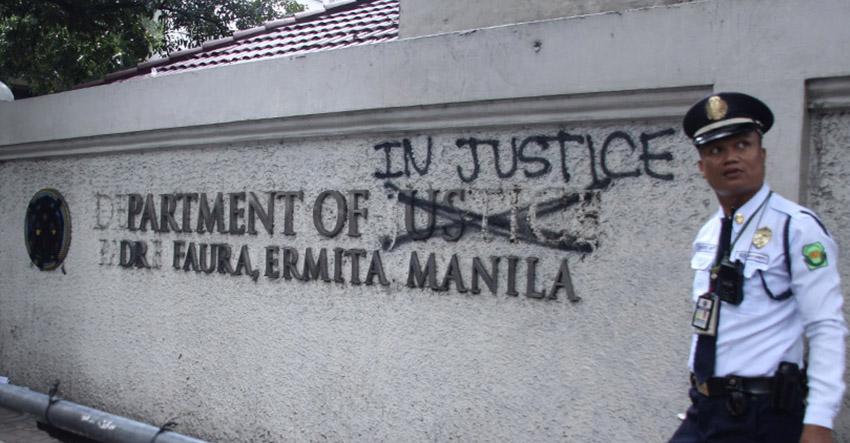 They also spray-painted the “Department of Justice” marking ouside with the Department of Injustice” to expressed their indignation over the unsolved killings of tribal leaders in Midnanao.

Delegates of the human rights caravan Manilakbayan called the attention of DOJ to side with the victims of human rights violations in Mindanao “instead of taking the side of the perpetrators.”

Human Rights group Karapatan in Soccsksargen spokesperon Reverend Sadrach Sabella cited the Capion massacre as “one of the cases of extra judicial killings in Mindanao that has not been given justice.”

“The DOJ itself ordered the fiscal in Davao del Sur to re-investigate the case, but more evidence were required. They did not accept the criminal charges filed against the 27th Infantry Battalion of the Armed Forces of the Philippines,” Sabella said.

Sabella added that “this just show that the DOJ was never in favor of the victims, but in favor to the big mining corporations and military perpetrators.”

On October 18, 2012, Juvy Capion, who was pregnant and two of her children were massacred allegedly by soldiers in their house in Tampakan, South Cotabato. Juvy is the wife of Daguil Capion, who is a known anti-mining advocate.

Ronell Campos, a relative of Dionel Campos, spoke during the protest saying “DOJ acts immediately on other issues, but they are very slow if the Lumads are the ones affected.”

Dionel Campos is the chairperson of an IP organization Malahutayong Pakigbisog Alang sa Umaabot (Mapasu). He was one of the three victims killed last September 1 in Lianga, Surigao del Sur. The two others were Emerito Samarca, executive director of the Alternative Learning Center for Agriculture and Livelihood Development and Datu Bello Sinzo, a lumad leader in their community. They were killed in front of the residents.

The perpetrators of the Lianga massacre were identified members of a certain paramilitary group called Magahat Bagani. Cases have already been filed by the witnesses, but the identified killers are still at large.

Campos said that their community was attacked because their school, ALCADEV, was accused of being built by the rebel group New People’s Army.

“They want to close the schools, but they should instead thank this school for it provided what the government did not provide,” Campos said.

“Our school is included in the list of schools the Magahat Bagani wants closed,” he added.

In previous news reports, Surigao del Sur governor Johnny Pimentel himself said that the Magahat Bagani is a creation of the government forces. The governor has also called on the government to disband and disarm the paramilitary group.

In Talaingod, Davao del Norte, a motorcycle driver, Awing Ampoga confessed during the protest that he has also experience harassment from the military in their community.

Ampoga said that the military in their community are forcing them to be part of paramilitary group to face and hunt NPAs.

“If I will not join the paramilitary, the military will imprison me for 10 years,” he said

Ampoga is one of the evacuees from Talaingod, Davao del Norte who sought refuge at a church compound in Davao City. The bakwits are there for nine months already since they flee their communities last March.

Both Campos and Ampoga said that the DOJ and the government themselves push Lumads to take up arms against the government “so we could protect ourselves and our lands.”

Campos said “time will come, if justice will not be given to the Filipino, they will be forced to take arms.” (davaotoday.com)