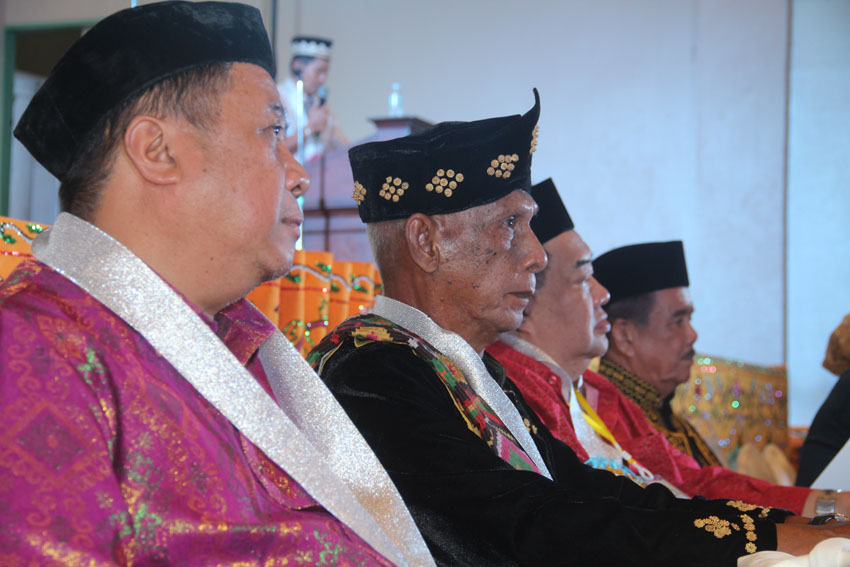 UNITED SULTANATES. The royal sultanates of Mindanao gather for the 1st Grand Summit of the Confederation of Royal Sultanates in Mindanao held at the Davao Convention Center on Thursday morning to express their support for the Bangsamoro peace process and federalism. In photos are Sultan Omar Pax Mangudadatu, Sultanate of Royal House of Buayan and Provincial Governor of Sultan Kudarat and Sultan Mohammad Pinandatu Uko Mluk of the Sultanate of the Grand Royal House of Kabuntalan. (Zea Io Ming C. Capistrano/davaotoday.com)

DAVAO CITY, Philippines — Traditional leaders of the royal sultanates of Mindanao gathered Thursday here to express their support to the Bangsamoro peace process and the move to shift to a federal form of government.

Datu Manaros Simbaan from the Royal Sultanate of Lanao 16th Royal Houses said they are gathering for the first time to symbolize the unity of the leaders in Mindanao in support of President Rodrigo Duterte’s push for federalism and the Bangsamoro peace process.

Simbaan said the voice of the sultanates is still important, even to this day.

“(The sultanates) are the real chieftains of their respective communities, they are the people who are respected in their community and therefore their influence to the people is very strong,” he said.

“We are all here for us to be part of consolidating the sultanates of Mindanao. We will be partners of government in looking forward for a peaceful, better and productive communities,” he said.

Maongco told Davao Today in an interview that they signed a covenant where the eight sultanates of Mindanao expressed support for the Duterte administration and set unity among the members of the newly-established Confederation of Sultanates in Mindanao.

“We signed the covenants. The leaders of the Royal Houses of various sultanates also signed it,” he said.

Sultan Tungko Saikol of Kabuntalan under the the Royal Sultanate of Rajah Buayan said the Sultanates’ participation is important in the Bangsamoro Peace Process.

“Even before pre-Hispanic area, the Sultanates of Sulu is leading Muslim communities in Mindanao. It is only proper that in issues concerning the Bangsamoro, they are included,” he said.

Saikol lamented that in the previous administration’s peace process, they were not consulted.

“Hindi naman kami sinasali eh, ngayon lang. Ibig sabihin malaki ang maitutulong namin dahil meron kaming komunidad, so malaki ang maggawa, malaki ang matutulong ng Sultans para isulong ang usaping kapayapaan (We were not included before, it is just now that we were recognized. It means we can a help a lot in ),” he said.

Saikol said they hope their voices will also be heard because they too have views about the issue on peace.

Sultan Kudarat 1st District Rep. Suharto Mangudadatu said it is just now that the Sultanate came out to manifest their support after Duterte showed that he is welcoming all sectors in the government’s peace roadmap.

“When the sultanates saw that the President is listening to all sectors, the traditional leader decided to come out and support his programs,” Mangudadatu said. (davaotoday.com)