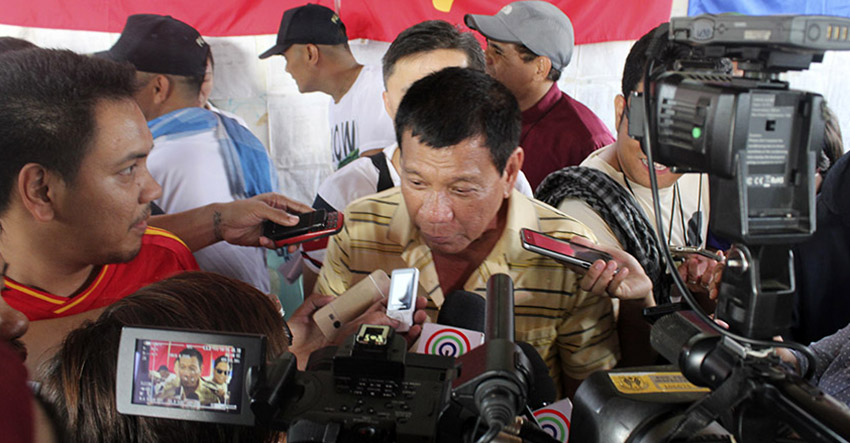 DAVAO CITY – Presidential frontrunner Davao City Mayor Rodrigo Duterte said if he wins,  he would “dismantle the government and build a new one.”

“We will change this government. If I’m there, I will revolt from the inside because this is not a government for the people, so you should join me,” he told the crowd in a village somewhere in the boundary of Makilala and Tulunan towns in North Cotabato where he received a soldier who was captured and detained as a prisoner of war by the New People’s Army Tuesday, April 26.

Duterte announced that he would immediately declare a ceasefire if he wins in the May 9 national elections.

He said all Filipinos including the Moro people should talk about peace.

At the end of his speech Duterte told the crowd that they should choose the candidate whom they think can help uplift the lives of the Filipinos.

Duterte said he is hurt with a government that is “ruled by elitists” and is not for the people.

Duterte said that there was no other candidate who was talking about Mindanao and the peace process.

He also said that only a few decides who is the next president. He said this is because the Constitution was made by the rich.

“Mao pud karon, usa ra, duha, tulo ka tawo lang magpili sa President (That’s why now you only have, one, two, or three persons deciding who the next President should be),” said Duterte.

“Pag ako mapresidente gub-on ko ning gubyernoha ni, tindog kog bag-o (If I become president, I will destroy this government to build a new one),” he said.

Duterte admitted that he talked with the founder of the Communist Party of the Philippines, Prof. Jose Maria Sison, on Monday night, April 25, via Skype.

He said Sison told him that if he wins in the elections, Sison will come home.

During the last presidential debate on Sunday, April 24, Duterte reiterated his stance to resume peace talks.

“The war in Mindanao runs deep… We have to talk and we have to correct the historical injustice,” he said.

“I tell you as a Mayor of the City of Davao there will be no peace. There can never be a federal government until we talk to the NPAs which has been fighting us,” Duterte said.

This was not the first time that the only candidate of Mindanao for the president spoke about rebelling against the government.

In January last year, Duterte also spoke of coalition government during his facilitation of the release of  jail warden who was taken by the NPA’s in Monkayo, Compostela Valley province.

On Monday, Duterte also received the five police officers who were taken by the NPAs in Paquibato district here. (With a report from Maria Patricia C. Borromeo/davaotoday.com)