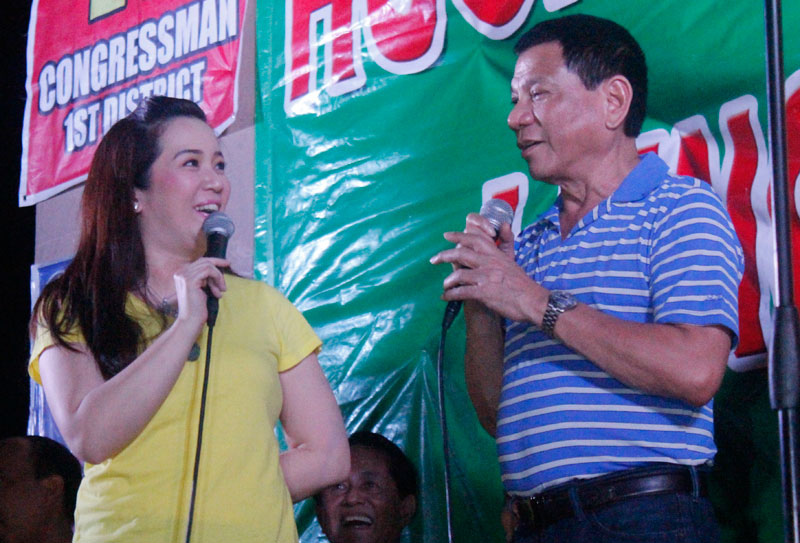 However, what’s become clearer by the day is Kris’s intent to run in 2016.  Although she made no mention what particular elective position she’s aspiring, Duterte himself said Kris “will run for Senator.”

It can be recalled that despite Duterte’s public endorsement of Noynoy Aquino, presidential aspirant then, another presidential wannabe won in Davao City.

Coming to his own defense, Duterte explained to the public that he did his best, “but that’s all that I can do.”

However, what’s become clearer by the day is Kris’s intent to run in 2016.  Although she made no mention what particular elective position she’s aspiring, Duterte himself said Kris “will run for Senator.”

And coming to Davao City, attending just one of Hugpong’s regular sorties in one of the villages here, could be of help.

Kris, the celebrity, was certainly a crowd-drawer.  Loud cheers were heard when she personally invited Duterte to be her co-host for her morning show’s second anniversary.

Again, Duterte was prodded to answer positively but later on backtracked, saying he’s “no Chiz,” and that he would have to find a replacement.

Kris asked the vice mayor to tour her around the city’s destinations so that those who are watching her show abroad would see the cleanliness, discipline and tastefulness of the city’s foods.

Duterte explained that Garcia wants to be publicly endorsed by the talk-show host.  He also appealed for Louie Bonguyan, Hugpong’s bet for representative in the first congressional district versus the incumbent Karlo Nograles.

Duterte said that when Congressman Nograles heard that Noynoy Aquino was running for the presidency, “Nograles had many things to say.”

Kris as well as Escudero and Poe stayed for an hour in the rally.  Hugpong candidates were forced to shorten their speech, as Kris’s arrival was constantly announced.  (John Rizle L. Saligumba/davaotoday.com)