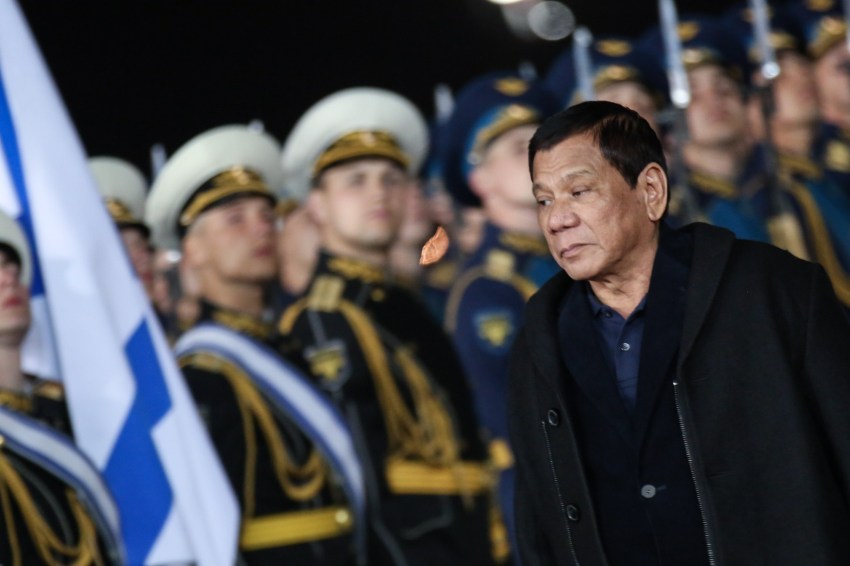 President Rodrigo Duterte is accorded military honors upon his arrival at Vnukovo-2 Airport in Moscow on May 23, 2016 to kick-start his official visit to the Russian Federation. (Presidential Photo)

DAVAO CITY, Philippines- Philippine President Rodrigo Duterte is expected to fly in from Moscow, Russia sooner than expected as he placed the whole island of Mindanao under Martial Law following clashes between government troops and suspected local terrorist group in Marawi City on Tuesday, May 23. Duterte is in Russia for a four-day state visit.

In a press conference from Moscow, Foreign Affairs Secretary Alan Peter Cayetano said the meeting between Duterte and Russian President Vladimir Putin and Prime Minister Dmitry Medvedev will be postponed.

“We are in the process of arranging that President Putin and President Duterte will be able to speak most probably it will be (a) phone call because President Putin is not in Moscow at this point in time,” he said.

Cayetano added that the declaration of Martial Law was based on the President’s assessment.

“He will act within the framework of the constitution. He will follow all rules and regulation,” he said.

Meanwhile, Defense Secretary Delfin Lorenzana said Mindanao was placed under Martial Law “because there are also problems in Zamboanga, Sulu, Tawi-tawi and also in Central Mindanao in the BIFF (Bangsamoro Freedom Fighters) area.”

As of 11 PM, Colonel Edgard Arevalo, chief of the Armed Forces of the Philippines Public Affairs, said the situation in Marawi has been stabilized.

“Security forces are in full control of the situation. The armed men we are dealing are not ISIS, but local terrorist group,” Arevalo said in a statement.

He also clarified that the city hall in Marawi “was not occupied as was earlier reported” and that it was untrue that the Amai Pakpak Hospital has been occupied and the people there were held hostage.

“The news being circulated by these terrorists and their sympathizers are spurious and are meant to spread lies and disinformation. It is propaganda to attract foreign terrorists support and recognition,” Arevalo said.

Arevalo said based on the information from the Army’s operating units soldiers proceeded to Barangay Basak, Malutlut in Marawi for law enforcement operations at around 2pm Tuesday. He said the troops were received information regarding the presence of local terrorists in the area.

“The security forces were fired upon constraining them to retaliate. Follow up operations are still ongoing and we cannot reveal other details so as not to compromise operational security,” he said.

He added that the Duterte Administration should learn from what happed during the Zamboanga Siege – displacement, death, hunger and poverty continues to affect the civilans even after a year,” said Jerome Aba, national chairperson of Suara.

He said the declaration of Martial Law also lessens the possibility of resolving the issue through diplomatic and non-militaristic means.

Meanwhile, Amirah Lidasan, a former Suara Bangsamoro chairperson, said Marawi City “is being turned into a battleground, using symbols such as the black flag of the ISIS and making this look likes a scene in ISIS-area in Syria.”

“Let us criticize those who fan Islamophobia by focusing only on the symbols such as the flag rather than the consequences of the attack to the residents of Marawi City,” she said.

“May our government be enlightened that their all-out war attacks against extremism is taking its toll on the civilians and not on their targets. How could we believe now on their propaganda of winning in their all-out war, of having decimated the Abu Sayyaf in Sulu and Basilan, when we see this happening in Marawi City?” Lidasan said.

Netizens on Facebook posted photos of burning areas in Marawi City. Jomar Sharief posted around 8 pm Tuesday: “Hindi po kami okay dito! Let’s be true and not fool the media about what is happening (at the moment) to our place. May mga nasusunog sa town and we’re not hearing any fire truck sirens or what. And now the lights are out and we’re hearing gunshots again.” 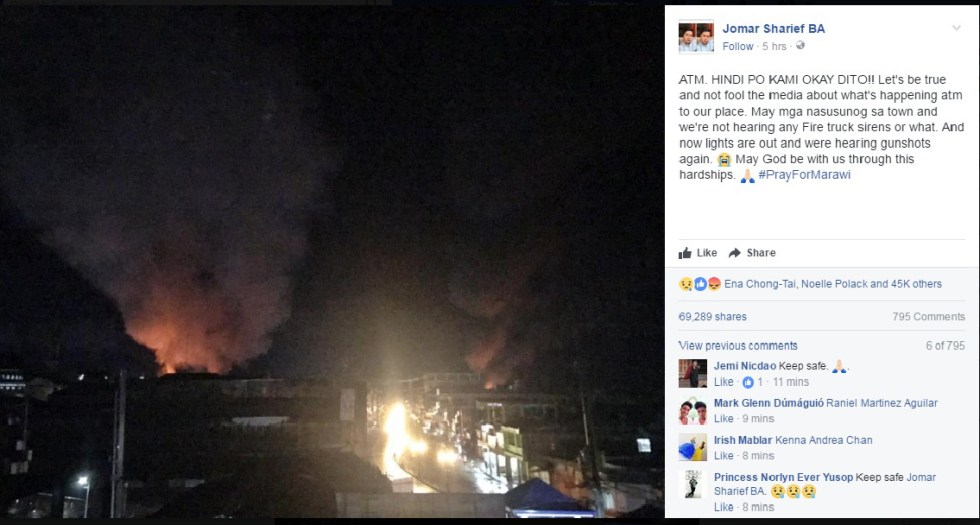 Another netizen, Drieza Abato Lininding appealed to government troops “not to use aerial and heavy bombardment to avoid civilian casualties.”

He said while there was an ongoing firefight in Markaz Barangay Basak Malutlut “AFP immediately employed aerial bombardment.” (davaotoday.com)