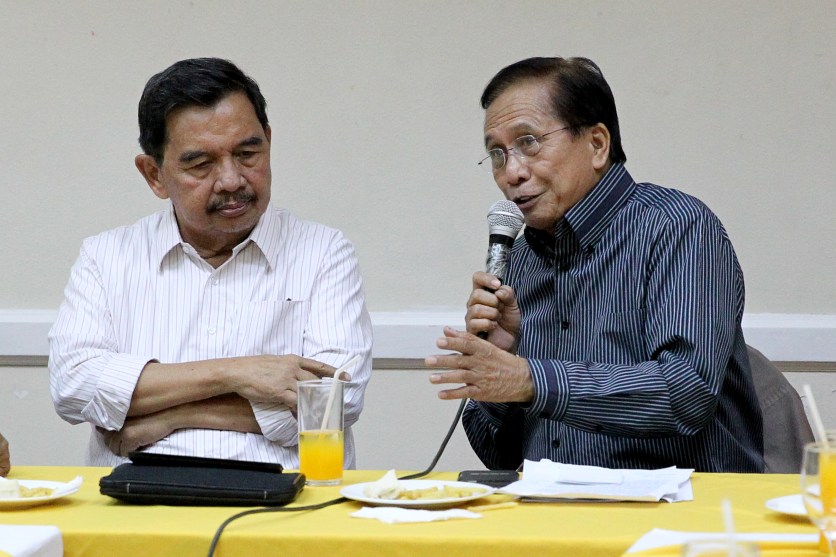 DAVAO CITY — Presidential Peace Adviser Sec. Jesus Dureza met with the Moro National Liberation group headed by Muslimin Sema  on Tuesday, August 9 as part of a series of meetings to consult all sectors of the Bangsamoro.

The move would be part of the preparation to craft an enabling law that will establish the Bangsamoro governance unit to replace the present Autonomous Region of Muslim Mindanao.

Dureza said the Duterte administration is eyeing to pursue a convergence, or consensus, among the various Moro groups for the eventual formation of a Bangsamoro government.

President Rodrigo Duterte approved on July 18 a comprehensive peace road map which will address the Bangsamoro issue and the resumption of the peace talks with the Communist Party of the Philippines through its political wing, the National Democratic Front.

The peace strategy eyes the consolidation of the peace agreements already signed by the government including the Moro Islamic Liberation Front’s Comprehensive Agreement of the Bangsamoro (CAB) and the Moro National Liberation Front’s 1996 Final Peace Agreement (FPA), including relevant provisions of the Republic Act No. 9054 (or the Autonomous Region of Muslim Mindanao Law) and the Indigenous People’s Rights Act (IPRA).

Dureza said Sema’s group committed to converge with any group to “bring about an inclusive Bangsamoro enabling law.”

“There was a very clear commitment of convergence, to converge with any group in order to bring about an inclusive Bangsamoro enabling law. Yun ang pinaka-clear na commitment ng grupo nila (That was the most clear commitment from their group),” he said in a press conference after the meeting.

Dureza said that they will still be talking with MNLF Chairman Nur Misuari, whom they cannot directly talk to yet due to the charges he is facing.

He said that all sectors in the Bangsamoro must be represented.

“Because that makes a lot of difference—the opportunity to make it inclusive for everyone must be made available,” he said.

Dureza said that the government envisions an “all-Moro assembly”  once they get the commitment of all Bangsamoro groups to come together.

“Because we will leave the matter to the Bangsamoro to determine what they want for themselves in accordance to their very basic aspiration of self determination,” he said.

The government panel and the Moro Islamic Liberation Front will be meeting in Kuala Lumpur, Malaysia on August 13 to launch the implementation stage of the Comprehensive Agreement on the Bangsamoro.

Dureza said they will discuss on “how to move forward.”  (davaotoday.com)