‘Nada’: Duterte maintains no more releases of prisoners before signing of bilateral ceasefire 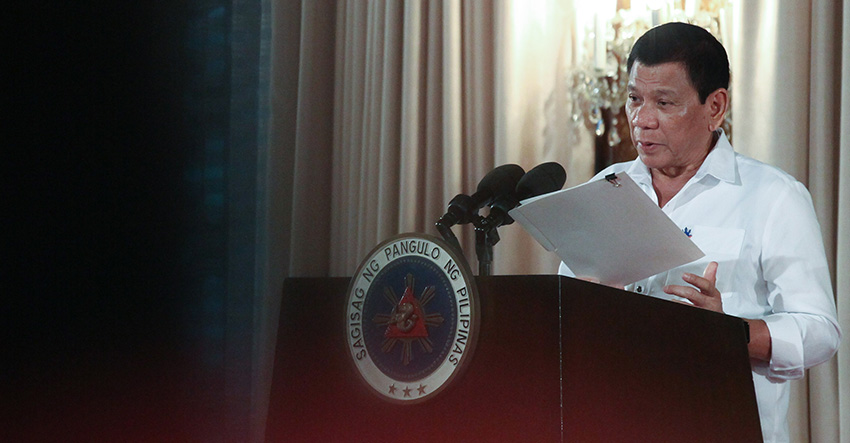 These were President Rodrigo Duterte’s words on the release of political prisoners in the country during the ceremony of the recognition of The Outstanding Filipino (TOFIL) awardees for 2016 at the Heroes Hall in Malacañan Palace Monday.

“Sign a ceasefire agreement and I will release all of them… but not before. But not before, no more releases of the [political prisoners],” Duterte said.

He said he already released “all the big leaders of the Communists” including couple Benito and Wilma Tiamzon whom he described as “ideologues”.

The Tiamzons were among the 22 political prisoners released by the government to participate in the peace talks in Oslo, Norway.

She said aside from the 25 political prisoners that will be released in the coming days, Duterte also committed to release all those who are sick and elderly.

But Duterte has repeatedly said it in his recent public engagements that he will not release any more political prisoners unless a bilateral ceasefire agreement is signed.

NDF consultant Porferio Tuna said Duterte should honor his previous pronouncements respect the Comprehensive Agreement for the Respect of Human Rights and International Humanitarian Law and the Joint Agreement on Safety and Immunity Guarantees.

The agreements on CARHRIHL and JASIG are among the previously signed agreements between the government and the NDF.

Tuna said the release of political prisoners is a matter of justice that the government should fulfill.

He also said peace talks is a “serious matter” and should not be treated as a game of chance.

“If this concern will not be addressed, then, how serious can they be in discussing the substantial agenda?” Tuna said, referring to the remaining three agenda of the peace talks, including the agreement for social and economic reforms, political and constitutional reforms and the end of hostilities and disposition of forces.

He said the issue of the release of political prisoner is a gauge of the seriousness of the government in fulfilling their obligations.

Reports quoted NDF senior adviser Luis Jalandoni as saying that the NDF is willing to sign a bilateral peace agreement ahead of the release of the political prisoners.

“We are willing to sign it even ahead, but of course he (President Rodrigo Duterte) has to make a commitment and he has to implement it,” Jalandoni said in a GMA News Online report published on Saturday, Dec. 10.

He said a bilateral ceasefire is also beneficial to the people “caught in the crossfire.”

Bello also said they recognize the effort on the part of the NDF who declared an indefinite unilateral ceasefire in August.

“Its declaration of an indefinite unilateral ceasefire in response to President Rodrigo Duterte’s declaration in August is unprecedented and historic,” he said. (davaotoday.com)