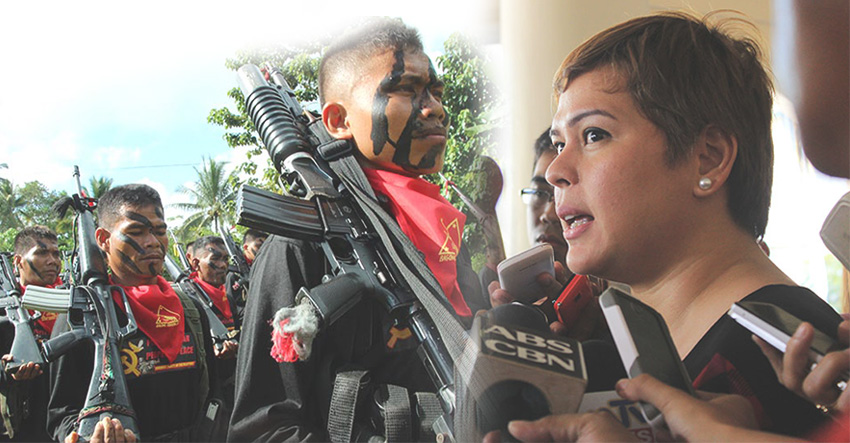 The New People’s Army in Southern Mindanao Region says it would gladly discuss any matter that Davao City Mayor Sara Duterte would like to take up with the revolutionary movement. (davaotoday.com file photos)

DAVAO CITY, Philippines—The New People’s Army in Southern Mindanao emphasized that although it welcomed the talks with Mayor Sara Duterte, it stands by  the national leadership of the National Democratic Front of the Philippines as the negotiating entity in the peace process.

This as Sanchez slammed the Armed Forces of the Philippines in Davao region for requesting an augmentation force that will be deployed in Davao City.

“To make certain its all-out war is sustained, the AFP in the region has already beefed up its infantry.  ​Their arrival mocked the public statement made by GRP Mayor Sara Duterte to talk with the NPA in the wake of the tactical offensives in Calinan last week,” he said.

Sachez said the NPA’s tactical offensives against state security forces in Davao region has resulted to 20 fatalities. He added that the communist fighters have also foiled a score of military assaults in Davao Oriental, Davao del Norte, Davao City and North Cotabato, respectively.

“By its own account after two day-engagement, the AFP launched massive airstrikes and artillery bombardment in the two separate incidents. More than a total of 500 families in Bansalan and Asuncion towns have been displaced due to the AFP’s indiscriminate shelling,” Sanchez said.

Meantime, the NPA said that it would “abide by their duty to defend the masses and the revolutionary movement by launching punitive actions against the AFP, PNP and their paramilitaries who are deaf to the call for peace by carrying on with a futile all-out war.” (davaotoday.com)