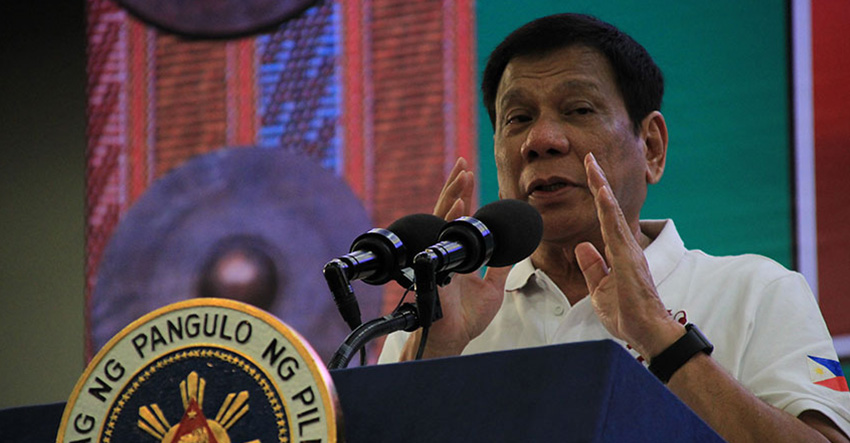 President Rodrigo Duterte says that it is not the Middle East, but the US, who “imported terrorism”. Duterte sees foreign intervention as what caused the radicalization of groups who are “pushed to the wall”.

DAVAO CITY – President Rodrigo Duterte said that he is now “working overtime” with Cabinet Secretary, Leoncio Evasco, to prepare for the talks with the Moro Islamic Liberation Front and the Moro National Liberation Front.

Duterte said that he might be travelling to Jolo, Sulu to meet with MNLF Chairman, Prof. Nur Misuari.

“I have to go to Jolo to talk to Nur and maybe I’ll order the military to just let him rest for a while, for him to move around Mindanao to get the consensus among the followers of the (MNLF),” he told Moro leaders and delegates of the Mindanao Hariraya Eid’l Fitr 2016 held here on Friday, July 8.

“In fairness to Nur we might also configure his territory of the Tausug nation. Then we’ll have a new boundaries and these boundaries are not intended to separate our brother Moro from Christians, rather it is only there to delineate territories,” he said.

Duterte who is pushing for federalism even before the elections said that, if the majority will not agree to federalism he is ready to concede “whatever is there in the (Bangsamoro Basic Law).”

“But if the Filipino nation and the plebiscite would not want it, then I am ready to concede whatever is there in the BBL. We will see to it that it will pass,” Duterte said.

Duterte, who is the first President from Mindanao, called on the public to help the government in building “a nation that will be founded on peace and understanding.”

He admitted that the peace issue in Mindanao will not be easy but assured that “something will change” before his term ends.

“Wala pa rin pero magkakaroon, inshallah (There’s none yet, but there will be if God wills),” he said. (davaotoday.com)