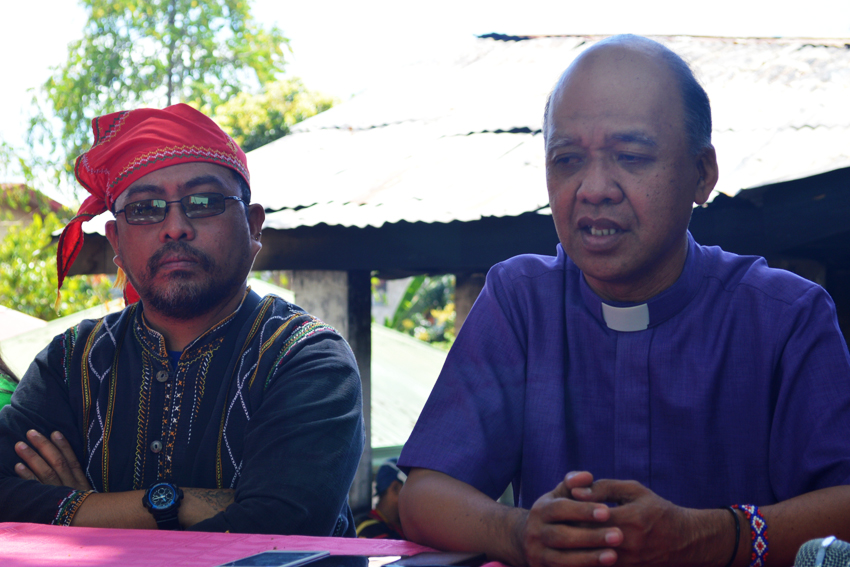 UCCP Bishop Modesto Villasanta (right) condemns the burning of their church dormitory and the evacuation camp that injured some Lumad evacuees and traumatized their student boarders and their staff last Wednesday, February 24.(Noveah May Simbajon/davaotoday.com)

DAVAO CITY – The Wednesday dawn fire which burned a dormitory building inside the United Church of Christ in the Philippines-Haran compound here is a direct attack on Church ministry, its bishop here said.

Bishop Modesto Villasanta said on Thursday that UCCP bishops were deeply saddened with the fire “that occurred in our sanctuary” and he believed that it has something to do with them accommodating the different groups of displaced Lumad.

UCCP Haran serves as an evacuation center for some 700 refugees who fled from the militarization of their communities in Davao del Norte and Bukidnon since last year.

Villasanta said the Lumad people, threatened with corporate mining or logging, have long considered the Haran compound their sanctuary as the UCCP continued to accommodate them “since it is part of our ministry to help those who are homeless and helpless”.

Villasanta said the Church “doesn’t have any on-going rivalry with other groups that may result to such attack” but sees it as an interruption to their ministry towards the affected Lumads.

At least five Lumads were hurt and 21 students said they lost their things during the 3:00 am fire.(davaotoday.com)