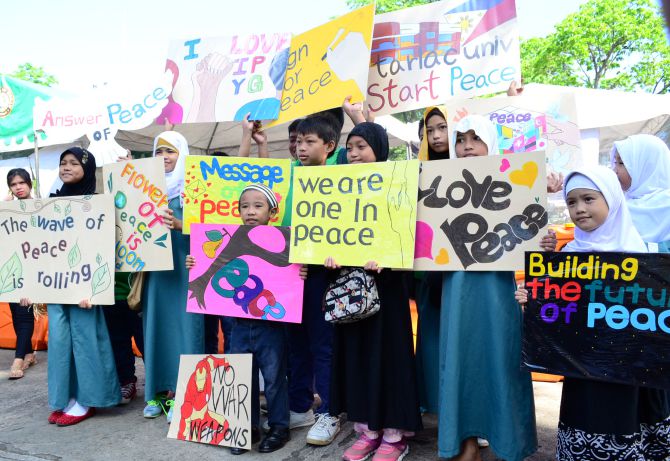 CHILDREN FOR PEACE. Pupils from Madrasah learning centers in Davao City smile as they hold placards in preparation for the Peace Walk at the People’s Park on Tuesday, May 23. The Peace Walk was organized by the Heavenly Culture, World Peace, Restoration of Light (HWPL) to commemorate the Declaration of World Peace. (Robby Joy D. Salveron/davaotoday.com)

DAVAO CITY, Philippines — An international group on Tuesday led the ​different sectors in the cit​y to do a ​“Peace Walk” to promote peace and campaign to end extremism.

According to the Heavenly Culture, World Peace, Restoration of Light (HWPL) Representative, Yaudi Sevilla, the event is in line with the 4th Annual Commemoration of the Declaration of World Peace.

The “Peace Walk” was part of the celebration dubbed as “Talk and Walk to Prevent Violent Extremism”. Sevilla said that violent extremism has become “one of the most talked about global concerns as a major threat to peace”.

“This is how we can make a change without violence. This is to raise awareness and start spreading the culture of peace,” Sevilla said.

Deputy Mayor Datu Pamikiren Latip P.A. Arumpac Jr. of the Iranun tribe, has also said expressed support to the campaign, saying “the event is a great opportunity for the people to see that Dabawenyos s are really for peace.”

He brought along 25 members of his tribe in the Peace Walk. Arumpac said they are really passionate in obtaining peace because their religion, Islam, is from an Arabic word “salam” which means peace.

On the other hand, Samer Along of the Madrasah Development and Peace Program said that they are educating the Muslim children about the violence of extremism.

“We educate the Muslim children. We give them the true value of Muslim education so that they will not be disoriented or misinformed if faction comes in their community,” Along said.

Along said that they are one with the advocacy of HWPL in attaining peace. He believed that “education is the greatest equalizer of peace.”

“Each one of us must be involved in attaining peace,” Along said.

The Peace Walk is in collaboration with the 11 tribes of Davao, Madrasah Comprehensive Development and Promotion Program and the National Youth Commission. (davaotoday.com)