What you need to know about Kadayawan’s history 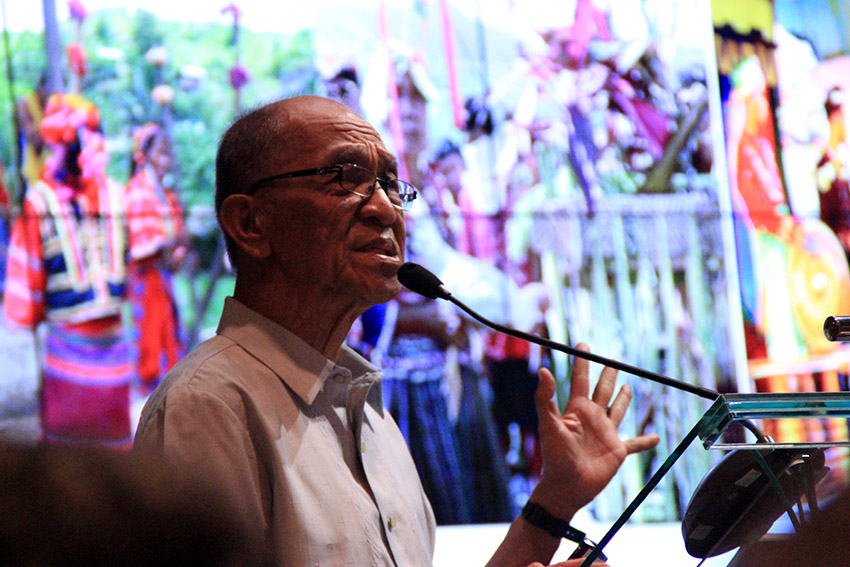 SIGNIFICANCE OF KADAYAWAN. Social activist and Lumad advocate, Karl Gaspar, explains the relevance of Davao City’s Kadayawan Festival as a celebration of Lumad stuggle for their ancestral domain during a forum at the Ateneo de Davao University Tuesday, August 16. (Earl O. Condeza/davaotoday.com)

DAVAO CITY —  Kadayawan is a festival that originated from the annual festival of the Ubo Manobo natives called “Kalibongan” in Kidapawan City during the 1970s.

Kalibongan was a festival initiated by the Mindanao Highlanders Association, Inc (Mindahila), an organization led by tribal leader, Datu Joseph Guabong Sibug. However, during the Martial Law years, the organization experienced difficulty in staging the festival which prompted Datu Sibug  to introduce the festival to then newly-appointed Davao City Acting Mayor Zafiro Respicio and celebrate it in Davao City in a bid to woo tourists.

The Kalibongan was renamed to Apo Duwaling Festival from the words Mt. Apo, Durian, and Waling-waling, which are the iconic symbols of Davao City.

The Apo Duwaling Festival was replaced by Kadayawan after Mayor Rodrigo Duterte assumed the mayoral post in 1988. In 1995, Duterte issued Executive Order No. 10 institutionalizing the celebration of Kadayawan every third week of August every year.

But what is the relevance of celebrating Kadayawan?

Local historians and Kadayawan organizers presented the festival’s relevance and historical background which centered on the tribes and their struggle for land.

In a forum held at the Ateneo de Davao University Tuesday, August 15, historian and writer Dr. Macario Tiu  said the struggle for land of the tribes in Davao and in Mindanao has long been part of their plight.

He said that since 1600s there have been resistance of the Moro and Lumad peoples against Spanish colonialization.

Spaniards discovered Davao, naming it as Tagalook, coming from Zamboanga to Davao gulf.

On 1800s, Tiu said that the name of Datu Bago, “a lord in Davao appears in Spanish documents.”

Since then, items like sulfur, wax, and cinnamon has been traded via Boetuan Bay, which is now known as Davao Gulf.

On 1835, Spanish merchant ship attacked Davao by a certain Oyanguren.

The attack, according to Tiu, resulted to Spanish occupation in Davao. Slavery has existed during the colonization, slaves are called Alang.

But not as long as 1860, Spanish rule in Davao did not last as locals refuse to cooperate with Spanish leaders.

And on 1901-1907, Davao has been the “most Americanized” place, aside from Manila, in terms of natural resources.

Tiu said that on the said years, “there are American abuses, grabbing of Lumad lands, forced labor to Lumad which resulted to social unrest.”

Davao, since then, has been described as “garden of Gods” for its bounty.

He said it is important that the people gain “interest to learn more about their culture ” and “look at their history upon why they are here (in the city) and stayed here.”

The 11 tribes of the city are the Bagobo-Kalata, Bagobo-tagabawa, Matigsalug, Ata Manobo, and Ovu Manobo of the Lumad; and the Moro people of Sama, Kagan, Maguindanao, Iranun, Maranao, and Tausug tribes. (davaotoday.com)