DAVAO CITY, Philippines – As the pandemic draws people to advocate for bicycle use and safety, advocates here in Davao City encountered an unlikely critic to this cause.

Photojournalist Keith Bacongco, a long-time bicycle user, started a photo album on his Facebook page called “Life in the Bike Lanes” where he posts photos of bicycle users and the perils they face every day such as street posts, gravel left on the street for construction work and parked vehicles.

Last week, his latest post received a critical comment, and to his surprise was made by Darrel Blatchley, an American marine biologist who has made a name here as founder of the D’Bone Collector, a natural history museum of fossils.

His comment was referencing the required registration fee of Php 150 by the local government for bicyclists. But the last part of his comment was hitting on cyclists as being undisciplined and not road worthy.

“It’s an anti-poor perspective–an insensitive, and selfish remark in this time of pandemic. Many of these bikers are left with no choice but to pedal their way to their workplaces for many reasons. Most of these bikers cannot even afford the cheapest motorcycles,” Bacongco posted on his account.

Davao City passed an ordinance ten years ago promoting the use of bikes as an alternative and healthy mode of transportation. In the past years, the city has seen more bike users across the city from workers, vendors, and athletes.

Bacongco said in an interview that Blatchley should be more sensitive of his posts on this issue since he is a public figure, and has even received the city’s Datu Bago Award given for exemplary residents in Davao.

“It’s hard to reconcile your stance on bikers and your advocacy work for the protection of the environment,” Bacongco said on his posts.

Blatchley has since deleted his post, and posted a series of explanations to why he is opposed to the idea of wider bike lanes in the city.

“Keith I think you misunderstood what point I am trying to make about the bike lanes. It’s not a sense of entitlement. It is a sense of concern for the bicycle riding public,” Blatchley said.

“When a jeepney pulls over to drop passengers it causes the cyclist to go into the far left lane endangering him even more. Cyclists don’t have turn signals thus the drivers in the left lane are expected to read the cyclists mind?” he asked.

“I give plenty of space for cyclists as I myself ride bikes. But as a motor vehicle operator I know the dangers that untrained cyclists present not just for others but themselves. Not all cyclists on the road are safety conscious. Countless times I have seen them counter flow on the cycle lane causing dangers for the other cyclist that have to swerve from them. (Quezon Boulevard) is a perfect example of the dangers. Island medium narrow road then split one lane for the bikes it causes undue danger for all,” he added.

Bacongco did not engage Blatchley in this point. He said in this interview that while “it’s true there are cyclists who lack discipline, whether they are new or doing this for a long time. But are all motorists disciplined?”

Bacongco said what he and other bike advocates are after is awareness on bike safety and to provide bike lanes as the city had recently did during the course of the pandemic. Some netizens and journalists have been posting photos where the bike lanes have been occupied by vehicles and other materials.

Another journalist, Jennie Davao from SunStar Davao, who held a fundraiser months ago to provide bike lights and reflectors for cyclists who need to travel during night times, also got criticisms from Blatchley. 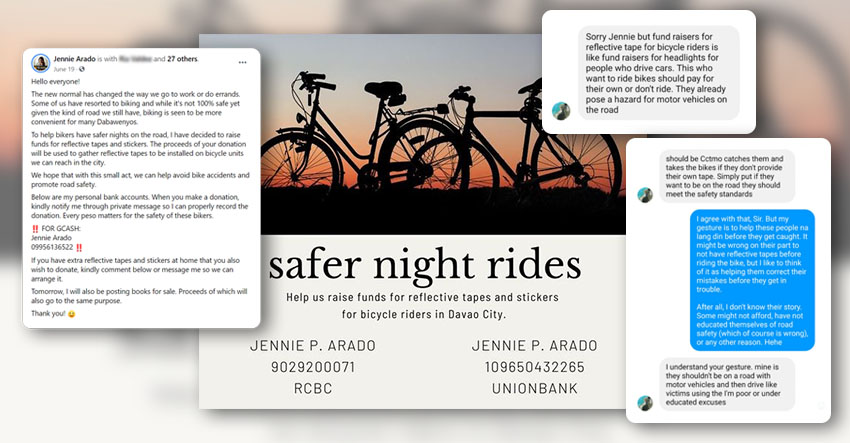 “I understand your gesture,” Blatchley messaged Arado. “Mine is they shouldn’t be on the road with motor vehicles and then drive like victims using the ‘I’m poor or under educated excuse’.”

But Blatchley explained to Bacongco that he’s concerned for bike safety came because his friend was killed in a bicycling accident back in the States.

“He was cycling on a road in the US on the cyclist lane (widened sidewalk), he swerved into the road for whatever reason and was dragged 80 feet under a car ripping his arm off at the shoulder. He knew how to cycle. But due to “expecting” traffic (he) died,” Blatchley said.

Blatchley offered his suggestions to improve bike safety. “When Davao already has traffic issues and no parking available then possibly they need to look at widening the roads narrowing the meter and a half islands in the middle of the road. That gives enough room for cyclist. As is (Quezon) Boulevard Street can’t even have two vehicles wide (lane) if the bike lane is properly observed,” he said.

“If the minimum is not met then you cannot truly say I am anti poor. Because the fact that some are poor means they CANNOT AFFORD A ACCIDENT!” he further said.

Bacongco said the city government has given support to bike safety lanes but this still needs more awareness and this is where he wants to work on.

Another environment advocate Arnold Vandenbroeck, who has stayed in Davao for decades, is more supportive to the cause and points out the city’s lack of resolve to push for more bike safety measures.

“It is a pity that the poor service and planning for bikers by Davao City (they only painted the now fading white dividing lines a fully 10 years after the biking ordinance was approved and they think they have done a great job!) becomes the reason for a quarrel between legitimate road users. Much more can and needs to be done by the city to enable the safe mobility of the “weaker road users” (bikers) as they are called internationally,” he posted on Bacongco’s wall.

“In several European countries biking doesn’t involve any registration fee. Biking is almost considered as a “human right”. All the more given its contribution to fight climate change, one bike at a time,” Vandenbroeck added. (davaotoday.com)