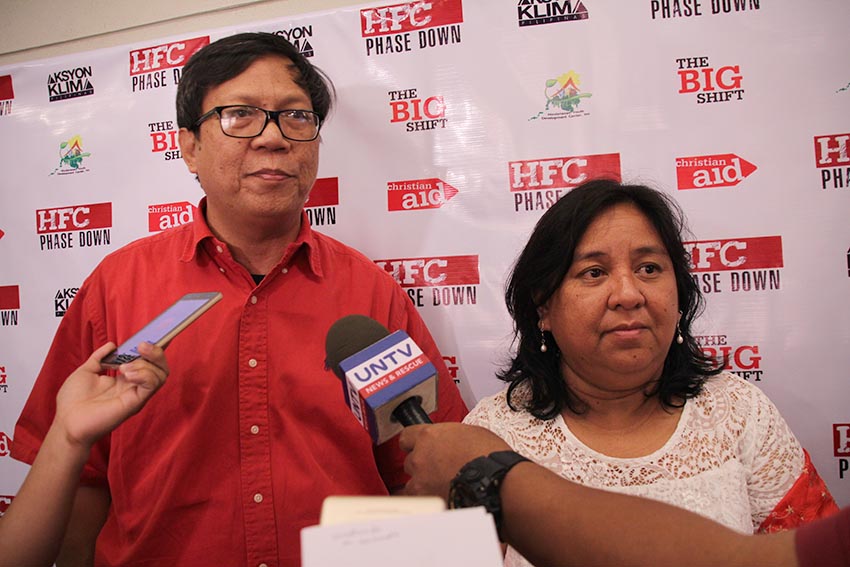 ENVIRONMENTALISTS. Renewable energy advocates Engr. Melvin Purzuelo, National Coordinator of Aksyon Klima Pilipinas (left) and Jessica Dator-Bercilla, Senior Advocacy and Policy Officer for Asia and the Middle East of Christian Aid (right) call for more public awareness regarding the dangers of Hydroflourocarbons, a type of greenhouse gas that was used as an alternative to Chloroflourocarbons, but causes bigger problem in the environment. Their groups held a forum at the Marco Polo Hotel in Davao City on Wednesday, Dec. 28. (Paulo C. Rizal/davaotoday.com)

DAVAO CITY, Philippines — A climate change advocate warned the public Wednesday of the dangers of hydroflourocarbons or HFCs over its recently discovered contribution to worsening conditions of global warming.

“We used them as an alternative to the chloroflourocarbons (CFCs) before to protect the ozone layer. But later on we found out that it was creating different problems that [contribute to] global warming,” Engr. Melvin Purzuelo, the national coordinator of Aksyon Klima,  said in a forum titled “Ozone and Climate: A learning event on reducing Global Warming” held at the Marco Polo Hotel here.

“HFCs is 3,900 to 10,000 times more potent than the buildup of carbon dioxide,” Purzuelo said in the forum, which was attended by some 40 students, teachers, and various civil society organizations from all over Mindanao.

“While we keep ourselves cool through our air conditioning units, we are contributing to global warming. It becomes a cycle, where our quest for a cooler environment actually just makes the whole Earth hotter,” Purzuelo pointed out.

Purzuelo added that if the use of HFCs will continue, it can contribute to an increase of the global temperature as much as 0.5 degrees Celsius by the year 2100.

The group and other climate change groups are pushing for a cap of at least 1.5 degrees Celsius or lower by reducing, if not eliminating, the use of HFCs.

“Our target of limiting the temperature rise will not be achieved if this goes on,” Purzuelo said.

According to ScienceDaily, substances that deplete the ozone layer, such as the CFC were phased out through the widely hailed Montreal Protocol, an international treaty signed by United Nations member countries in 1987.

Replacing the CFC was the HFC, which helped the ozone layer recover, but still induced global warming because it was a greenhouse gas.  (davaotoday.com)