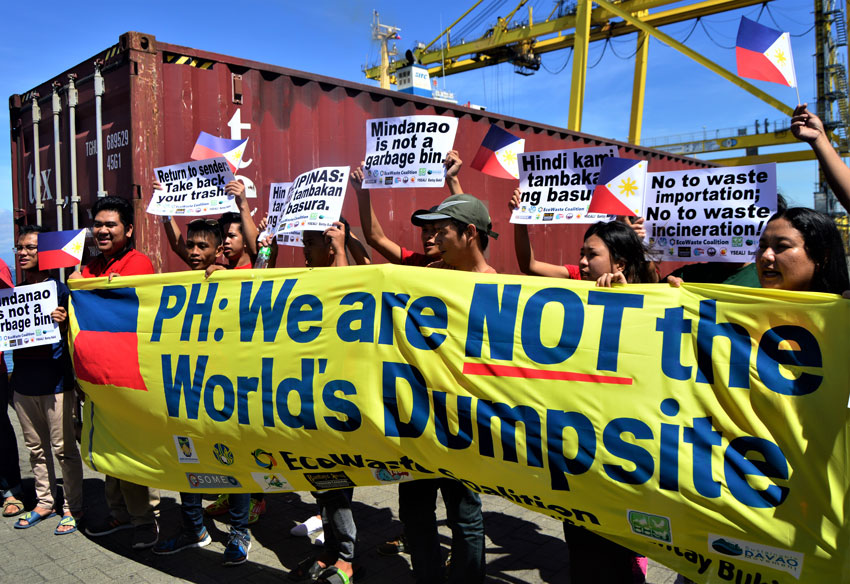 Members of the environmental watchdog EcoWaste Coalition hold a picket at the Mindanao Container Terminal (MCT) sub-port in Tagoloan, Misamis Oriental during the send-off of the 2.561 tons of electronic waste back to Hong Kong, China at the MCT facility in Tagoloan, Misamis Oriental, Monday, June 3, 2019. At the back is the container van containing the imported e-waste. (Jigger J. Jerusalem/davaotoday.com)

CAGAYAN DE ORO CITY, Philippines — The environmental watchdog EcoWaste Coalition has reminded the government not to allow the country to become the world’s garbage dump, as the 2.561 tons of electronic wastes (e-wastes) from China’s special administrative region of Hong Kong were sent back to its point of origin Monday noon.

The cargo, consisting mainly of shredded gadget parts and plastic scraps and packed in 22 huge sling bags, arrived at the Mindanao Container Terminal (MCT) sub-port in Tagoloan, Misamis Oriental on Feb. 2 this year, and was put on hold by the Bureau of Customs-10 (BOC-10) for “misdeclaration.”

The consignee, Crowd Win Industrial Limited Corp. based in Pasay City, declared the shipment as “assorted electronic accessories” but the actual content of the container van turned out to be smashed components of electronic devices, the BOC-10 said.

On March 5, the BOC-10 issued a warrant of seizure and detention for violation of Section 1400 (misdeclaration) in relation to Section 117 (lack of import permit) of Republic Act 1086 or the Customs Modernization and Tarrif Act.

The imported garbage was shipped back to its point of origin on board the cargo ship SITC Nagoya, which departed the MCT sub-port Monday, June 3.

The re-exportation of the waste from Hong Kong came on the heels of the long overdue departure of the 69 container vans of Canadian garbage after languishing in the Philippines for six years, EcoWaste Coalition said in a statement.

“The export of this hazardous waste from Hong Kong in the guise of ‘assorted electronic accessories’ is illegal under the laws of Hong Kong and the Philippines and the Basel Convention,” MCT sub-port collector John Simon told reporters following the send-off ceremony of the Chinese trash at the MCT Monday morning.

“It’s simple. They want to make us their dumping ground. But they did not prevail. This is a victory for the Filipinos,” Simon said, adding that had the Chinese trash not intercepted by the Customs authorities, 70 more container vans containing the same type of waste would have entered the MCT sub-port.

He said the e-wastes’ smell is “revolting” and are considered to be highly dangerous due to the high chemical content.

“In line with the mission of the [BOC] to strengthen efforts against smuggling and other Customs fraud, we are returning this unlawful shipment to protect our nation’s health and the environment,” he added.

Lawyer Mark Petalver, program coordinator of the Davao City-based environmental group Interface Development Interventions Inc. said in a statement that he finds it “very disturbing” that illegal waste cargoes are entering the country through the region’s ports.

“This alarming trend is totally unacceptable and should discontinue as soon as possible. Mindanao is not a garbage bin,” Petalver said.

By quickly returning the illegal waste shipment and skipping bureaucratic delay, said Aileen Lucero, EcoWaste Coalition national coordinator, “our nation is sending a clear and unambiguous warning to waste traffickers to stop sending other countries’ wastes into our ports.”

“We heaved a sigh of relief as the entry of some 70 containers of similar trash was aborted with the seizure of this test cargo,” Lucero said.

The strong presence of local civil society groups in this important event, she said, “indicates a growing concern among Mindanaoans against the use of the region’s ports as entry points for waste imports from overseas. We encourage them, the local authorities and the general public to keep a close watch over illegal waste traffic in the region.”

To protect Mindanao and the entire country from turning into a global dumping ground, the EcoWaste Coalition said it has renewed its call for a comprehensive and immediate ban on waste imports and for the rapid ratification of the Basel Ban Amendment.

The amendment, which has yet to be ratified by the signatory countries, aims to prohibit the export of hazardous wastes and other wastes from developed to developing countries for any reason, including recycling.

Aside from the garbage from Hong Kong, South Korea and Australia have also exported their trash to the Philippines, which would have been used for recycling and cement manufacturing, respectively, had the Customs approved their release. (davaotoday.com)