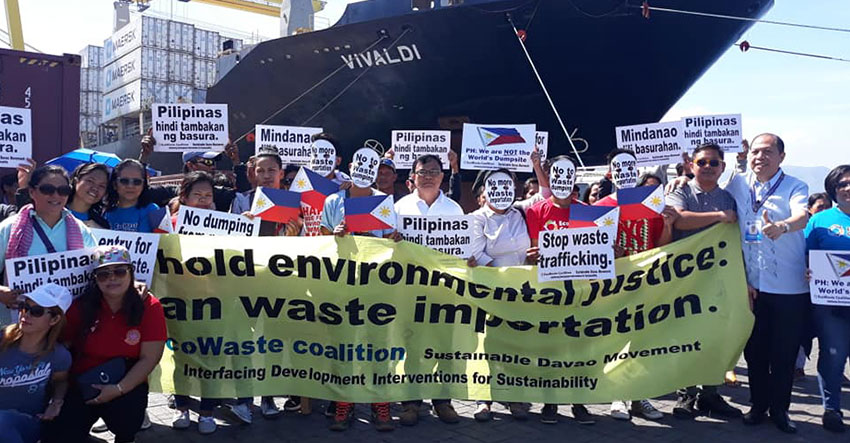 Environmental groups during the send-off ceremony at the Mindanao International Container Terminal (MICT) for the third batch of illegal South Korean waste shipments that were re-exported on February 16. (Photo taken from Ecowaste Coalition’s Facebook page)

CAGAYAN DE ORO CITY, Philippines — Environmental group EcoWaste Coalition has expressed optimism that the last two batches of imported trash from South Korea expected to be reshipped on Sunday (Feb. 16) and on Feb. 23 will be the last trafficked wastes from another country that will be dumped into the Philippines.

The South Korean trash, weighing about 6,500 metric tons, arrived in Northern Mindanao in July and October 2018.

The garbage was imported by Verde Soko Philippines Industrial Corporation purposely to be used as materials for its plastic recycling facility. But it was confiscated by the Bureau of Customs (BOC) when the company wrongfully declared it, as the company also failed to secure an import permit from the Department of Environment and Natural Resources.

Because of this, the Verde Soko plant, located at the Phividec Industrial Estate in Sitio Buguac, Barangay Sta. Cruz, Tagoloan town in Misamis Oriental, has been closed.

“The re-exportation of the remaining wastes and the cleanup of the storage site in Tagoloan, Misamis Oriental, which factually became an open dumpsite for South Korean rubbish, will help in bringing this dumping controversy to a close,” said Aileen Lucero, EcoWaste Coalition national coordinator.

To deter illegal traffic waste in the future, Lucero said, “all those responsible for this mess should be fully held accountable in accordance with the rule of law.”

She said there is also a need for the Duterte government to impose a total ban on waste importation and to ratify the Basel Ban Amendment.

The Basel Ban Amendment is an international law banning the transfer of hazardous waste from developed to developing countries.

“Those environmental justice measures will protect our country and our people from the negative consequences of global waste trade,” she added.

“The re-exportation of the remaining wastes from South Korea this month signifies our nation’s steadfastness to protect public health and the environment from the deceptive trade in hazardous waste disguised as plastic waste for recycling,” Simon said.

“As guardians of our ports, we are committed to curb illegal trade and halt all forms of customs fraud, including the practice of falsely declaring hazardous waste and other wastes as recyclables,” he added.

Two container ships, Vivaldi and Nordmarsh, have been commissioned to bring the remainder of the trash to its country of origin. (davaotoday.com)