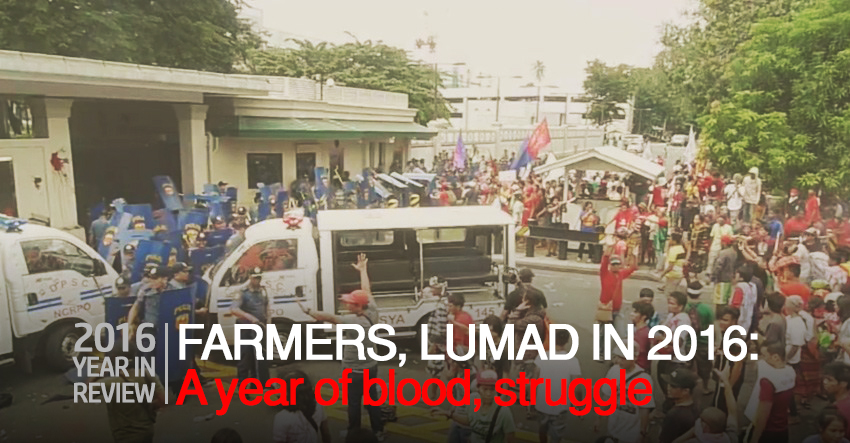 DAVAO CITY, Philippines – The year 2016 was a bloody year of struggle, especially for the farmers of Southern Mindanao. Last year, farmers felt the devastating effects of a year long dry spell, and bore the brunt of violence both from state agents and private companies.

On April 1, 20 farmers were injured, 78 jailed, while three died after Kidapawan City Police dispersed a 5,000-man barricade. The farmers, who came from eight municipalities of North Cotabato demanded 15,000 sacks of rice from the provincial government headed by Gov. Emmylou Taliño-Mendoza. They barricaded the national highway in Kidapawan City to bring attention to their plight.

The provincial government of North Cotabato had already declared the province in the state of emergency since January. The drought however, had already been raging since November of 2015.

Instead of rice, however, farmers were peppered with bullets.

The Kidapawan Massacre, as it is now aptly known, would be the first of the many bloody encounters that farmers would face.

On June 2, some 20 soldiers from the 60th Infantry Battalion strafed a house in Laak, Compostela Valley.

Rubber tappers Aladin and Randy Rosquites scampered away and were uninjured, but their house was riddled with bullet holes. Aladin noted that two backpacks with personal belongings, including government issued identification cards, cellphones, and work clothes were missing.

Aladin called the incident a ‘massacre’ because they were fired upon with no warning.

60th Infantry Battalion Commander Lt. Col. Emmanuel Canilla however, said the shooting was a legitimate encounter with members of the New People’s Army who fired some 50 meters away from the house of Rosquites. Aladin belied the army’s claim, saying they were alone when the gunfire happened.

On July 31, a wedding reception in Sitio Tibugawan, San Fernando, Bukidnon turned into a funeral after armed men led by a certain Butsoy Salusad fired upon them from a hilltop, killing one pregnant woman and wounding five minors. Salusad is the leader of paramilitary group New Indigenous People’s Army.

Datu Jimboy Mandagit, one of the tribal leaders in Sitio Tibugawan said he was one of the targets of Salusad. Mandagit said he earlier received a death threat from Salusad, who said he “hindered” Salusad’s plans through his anti-mining stance.

In a press conference, Lt. Gen. Rey Leonardo Guerrero of the Eastern Mindanao Command denied any links to Salusad and other paramilitary organizations.

On Aug. 5, a farming town in Barangay Parasanon, Maragusan, Compostela Valley was rocked by airstrikes and gunfire when the military clashed with the NPAs in the boundary between them and Barangay Mahayahay.

Juanito Torcende, captain of Barangay Parasanon said farmers were only able to return to their farmlands after he pleaded to the army.

Anti-mining activist and farmer leader Jimmy Saypan fell on Oct. 11, after being gunned down by a riding in tandem. Saypan, then secretary general of Compostela Farmers Association was shot at around 5 am in Purok 6-A, Barangay Jose Poblacion, Montevista town in Compostela Valley Province.

Like other members of his group, Saypan was previously tagged by the military as a member of the New People’s Army.

Farmers were also among those hurt and nabbed in the violent dispersal of the anti-US protest at the US Embassy in Manila on Oct. 19, who were  rallying under the national minority alliance Sandugo.

Sandugo is an alliance of indigenous people’s groups all over the country, many of whom are farmers in their respective hometowns.

Among the members of Sandugo is the Salugpongan, a group of datus from Talaingod, Davao Del Norte who united in 1994 to prevent the encroachment of big logging company Alcantara and Sons in the Pantaron Range.

The farmers’ struggle for land was also highlighted last year.

On Dec. 5, some 600 farmers occupied the campus grounds of the Cotabato Foundation College of Science and Technology to demand the 700 hectares of land reservation that was allocated for, but remained unused by the school.

The farmers, led by the MAILUMUNADO Farmers Association Incorporated were tilling the lands since the 1950s, when the school’s founder Hadj Fatima Matabay Plang founded the school.

The farmers are also claiming the 4,000 hectares of land, which was allocated for the University of Southern Mindanao by President Carlos P. Garcia through Presidential Declaration No. 428 on July 24, 1954.

Cecilio Carmelo, chairperson of MAFAI, said CFCST was only able to develop 300 hectares, while USM used only 131 hectares.

The MAFAI farmers are set to hold a dialogue with the national representatives of DAR on January 13 to discuss MAFAI’s petition regarding the lands of the two schools.

On Dec. 13, seven farmers were injured after blue guards armed with shotguns allegedly hired by Lapanday Foods Corporation fired at the protesting farmers, who occupied part of the land at San Isidro in Madaum, Tagum City.

Since Oct. 18, 1999, the Hijo Employees Agrarian Reform Beneficiaries Cooperation 1 was obliged to sell its Class A bananas to LFC under the Banana Sales and Marketing Agreement (BSMA) and Banana Purchase Agreement (BPA) for the Class B bananas.

However, in 2010, after experiencing “onerous contracts,” members of the Hearbco-1 enacted a referendum that decided whether the cooperative would continue with the contract. Members of the “No group” formed Madaum Agrarian Reform Beneficiaries Incorporated and insisted its independence from Hearbco1.

Farmers of the Madaum Agrarian Reform Beneficiaries Incorporated found hope in the cease and desist order issued by the Department of Agrarian Reform on Dec. 15, which ruled in favor of the MARBAI farmers.

However, on the last day of December, the guards of Lapanday reportedly held the MARBAI farmers on gunpoint and forced them out of their land. Currently, the guards allegedly hired by Lapanday have reoccupied the contested land.

Farmer’s landlessness, according to farmer activist Pedro Arnado, remains a reason of poverty among the country’s food producers

Arnado of the Kilusang Magbubukid ng Pilipinas said only one out of 10 farmers owned land. The rest are still tenants, or have sold their lands to big multinational companies because of lack of necessary assistance from the government.

Arnado also branded the Comprehensive Agrarian Reform Program as a failure, and said it was the reason why so many farmers are still landless today.

“CARP required farmers to pay amortization of 30 years to the government. Without necessary assistance in the form of subsidies, farmers had to sell their lands again,” Arnado said.

Arnado also mentioned that most of the lands in Southern Mindanao are owned by no more than 20 families, which include names like Lim, Dayanghirang, Malañaon, Rabat, Palma Gil, Yu, Zamora, Dizon, Floirendo, Piñol, Espinosa, Sacdalan, Cagas, Villa Abrille, Bautista, and Almendras, among others.

Arnado expressed hopes that a genuine agrarian reform program will be hammered out following  the third round of peace talks between the Philippine government and the National Democratic Front of the Philippines this month. The forthcoming peace negotiations  will tackle the  genuine agrarian reform and national industrialization under the substantive agenda on the Comprehensive Agreement on Socioeconomic Reforms. (davaotoday.com)